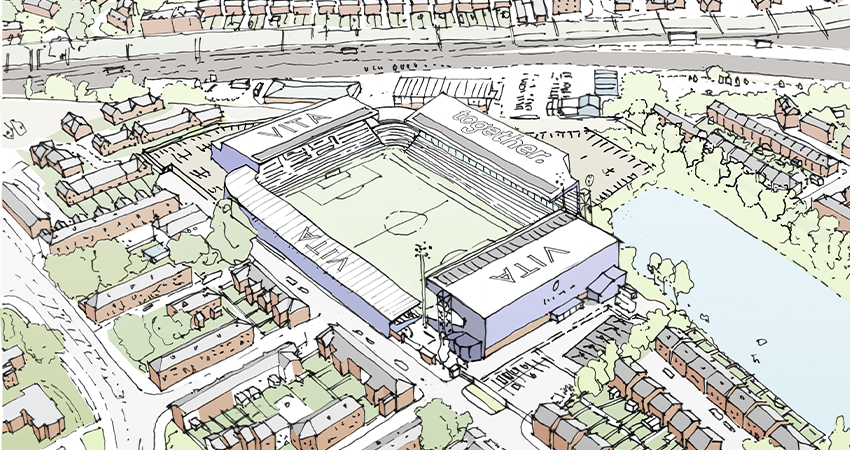 The long-term aspirations of Stockport County Football Club take a significant step forward today with the launch of a public consultation inviting views on proposals to expand and improve the stadium at Edgeley Park.

The consultation, which is the first of two phases, will include consultation events for local residents and Club supporters to come and view the emerging plans and speak to the project team.

The plans, which follow the Club’s vision to return to the Championship, include a phased approach to investing in infrastructure, to ensure sustainable growth.

“Edgeley Park has been our home since 1902 and the Club has been a key part of the community in Stockport for 120 years. With our ambition to play Championship football once again, we’ve got a real opportunity to invest in the stadium and create not just the sporting facilities we need, but to create a ripple effect reaching further into Stockport itself, boosting the town and its economy.

“We know promotion to the Championship will take some time and delivering the emerging plans will also take time; by proposing to deliver new stands in phases, culminating in a final capacity of approximately 20,000 seats, we can reduce the impact on the Club and our neighbours, while still playing at home.

“Involving our neighbours and supporters early in the process of designing these expansion plans is very important to us. Our aim is to create excitement and ambition not just within the Club, but across Stockport.”

The vision for an expanded Edgeley Park includes brand new East (Railway) and South (Together) Stands, bringing each roughly in line with the height of the existing Cheadle End, and an expansion to the North (Bergara) Stand to run the full length of the pitch.  All of these combined would take the stadium’s capacity to approximately 20,000. There are no plans to expand the Cheadle End Stand itself. The proposals would ensure the whole stadium is fully accessible with brand new facilities, with new food and drink offerings and hospitality areas, as well as in the region of 30,000 sq ft of flexible workspace in the new East Stand.

The Club has committed to two phases of public consultation before it seeks to submit planning applications at the end of the year, which will set out the outline vision for the whole expansion as well as more detailed plans for the East Stand. This would be the first of the stands to be redeveloped, provisionally starting in summer 2023.

The major investment into Edgeley Park also presents an opportunity to improve the environmental performance of the stadium and support Stockport and Greater Manchester’s carbon reduction targets. The Club will also be working on a Travel Plan, with the aim of encouraging fans to travel to matches using sustainable modes of travel and minimising impacts on the local community.

As part of the first phase of consultation, public drop in sessions are being held at the Stadium on the following dates:

Information can also be accessed on the consultation website: www.stockportcounty.com/stadiumexpansion