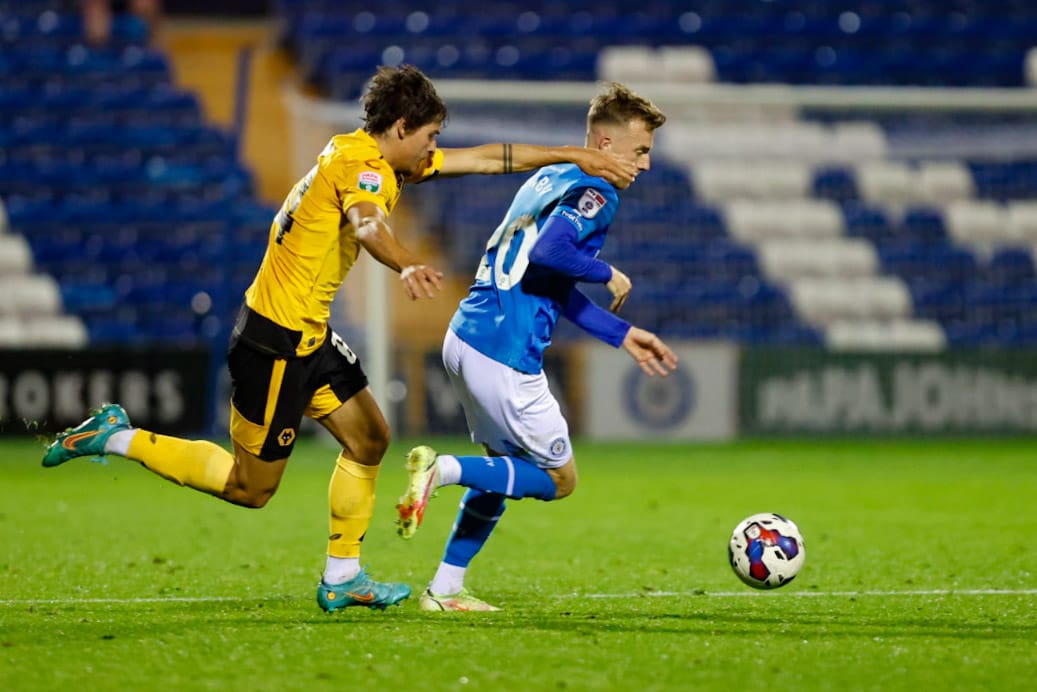 The Hatters’ second group match in the English Football League/Papa Johns Trophy saw them defeated by the odd goal in three at Edgeley Park against an Under-21 side from Premier League Wolves’ Academy.

Goals for the visitors just ahead of the first half’s mid-point and 20 minutes from time saw them prevail, despite a late, late Connor Jennings strike – while the result, coupled with Port Vale’s four-goal triumph at Shrewsbury, left County unable to progress further in the competition with one group game still to play.

County took to the field showing a full 11 changes from the League Two line-up that had started in SK3 against Harrogate three days previously. Paddy Madden, with his three-match suspension completed, returned to take the captain’s armband, and 17-year-old Cody Johnson was handed a competitive debut at Football League level. Two more young Hatters – namely, goalkeeper Bobby Jones and midfielder Keane Barugh – were included among the substitutes.

Madden executed the first shot of the evening, with three minutes played – latching on to Elliot Newby’s cross from the right, and volleying downwards for visiting goalkeeper Jackson Smith to catch on the bounce. And the skipper – enjoying his first outing since County’s previous Trophy-tie at Vale Park three Tuesdays earlier – fired another effort wide of the left post three minutes later.

Madden then turned provider with a delivery from the left that found Newby, whose close-range effort was parried by Smith around the far upright. And shortly afterwards, the young visitors – wearing squad numbers in the range between 55 and 95 – fashioned their inaugural chance, with Ollie Tipton stinging Ben Hinchliffe’s hands courtesy of a low shot from distance.

County continued to press – with Myles Hippolyte and Jennings sending respective shots beyond the right and left posts – but on 20 minutes, Wolves took the lead after captain Chen Campbell’s shot ricocheted off Joe Lewis and into the path of Lee Harkin who slotted home.

Lewis – to add injury to injury, one might say – took a knock in the build-up and had to be replaced, bringing an early end to the appearance he was making on his 23rd birthday. But County went close to grabbing a quick equaliser moments later, as Jennings headed narrowly over from Madden’s cross on the left.

The diminutive Harkin was proving a real livewire up front – crossing from the right for Campbell to head the ball into the arms of Hinchliffe, before the Northern Irish goal-scorer unleashed another shot of his own that fizzed past the right post. And as half-time approached, Campbell struck County’s left upright with a free-kick from 25 yards out.

An early second-half corner for the Hatters saw them go close to levelling within three minutes of the resumption, as Hippolyte headed on Newby’s delivery from the right and Smith tipped the effort over. And a well-judged tackle by Filozofe Mabete – he of the number 95 shirt – dispossessed Jennings, after Hippolyte had played the latter through on goal.

County continued the bright start to the new half, with Hippolyte firing a thunderbolt for Smith to parry, and Jennings heading over a Newby cross from the right. But the next attempt of note, 10 minutes after the hour, fell to the visitors – and saw them double their advantage, as Tyler Roberts seized on a loose ball and raced through on goal to fire past Hinchliffe.

Hinchliffe prevented further Wolves goals by saving with his legs from Harkin, and tipping a Campbell shot around the right post after a mazy run by the visiting captain – before Kyle Wootton was twice denied a consolation when an overhead kick and a subsequent header from the substitute were both caught by Smith.

There was, however, a goal for the County faithful to cheer in added time, and with Wootton playing his part as he squared from the left for Jennings to tap in at the Cheadle End.

[Debut for Cody Johnson, with a unique SCAN (Stockport County Appearance Number) of 1440.]

Man of the Match: Newby.