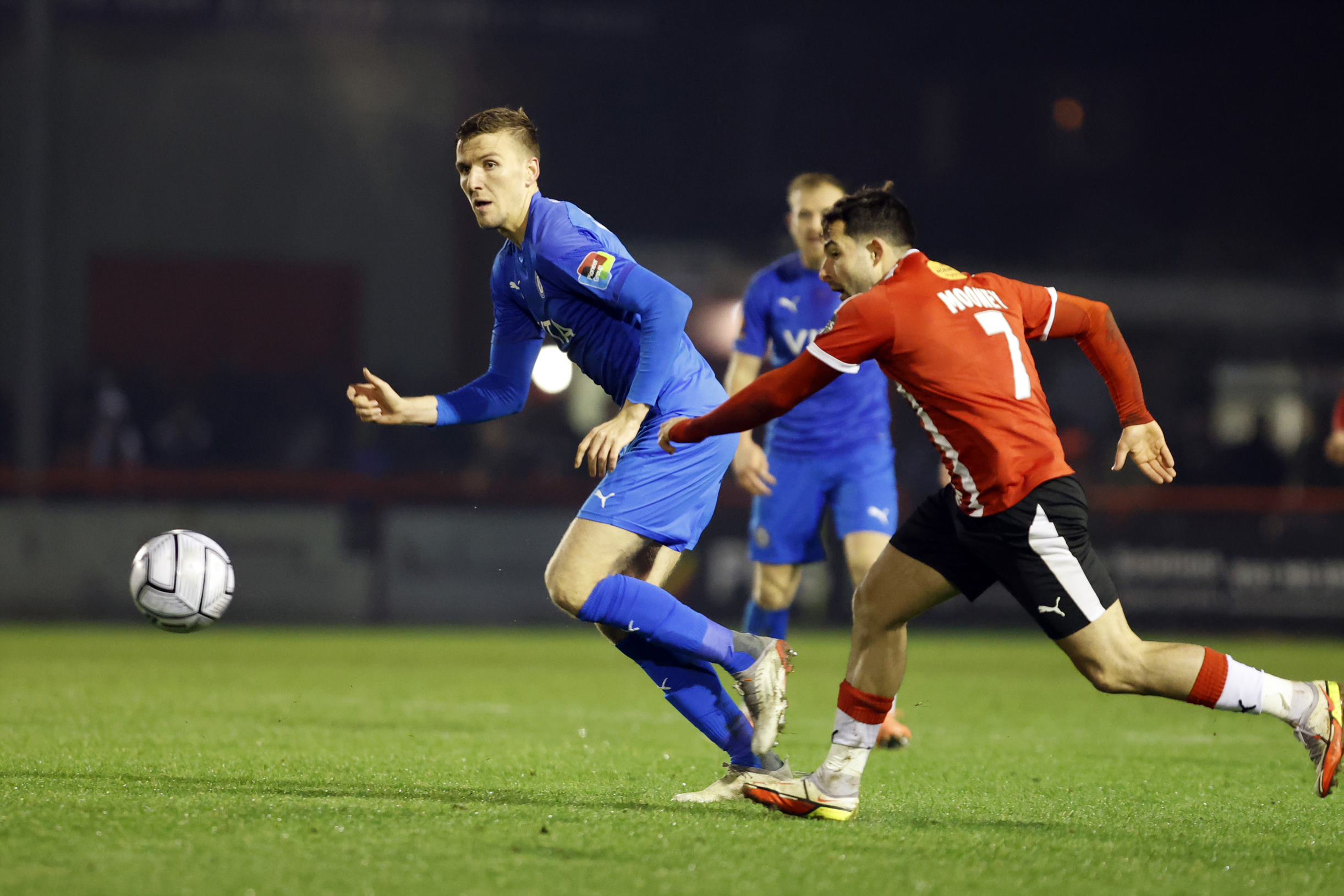 Our first home game of 2022 sees us return to Buildbase FA Trophy action this weekend, as we welcome eighth tier Larkhall Athletic to Edgeley Park aiming for a place in the Fifth Round.

We booked our place in the Fourth Round with a resounding 4-0 win over fellow National League side Grimsby Town four weeks ago, and are looking to reach the last 16 of the competition for the first time since reaching the semi-finals in 2019 – the year Dave Challinor went on to win the competition with AFC Fylde.

We have won all three of our league fixtures since that day too, scoring ten times in the process, to lift ourselves back into the play-off places and firmly in title contention.

Our opponents meanwhile, currently plying their trade in the Pitching In Southern League Division One South, are the lowest ranked side remaining in the competition, having progressed through five rounds already to reach this stage.

Tickets for this game are available to buy online now – at a discounted price of just £10. Click here to get yours today, and enjoy an afternoon of cup football at Edgeley Park.

This game is undoubtedly set to be one of the biggest in Larkhall Athletic’s 107 year history, as they compete in the Fourth Round of the FA Trophy for the very first time.

The Somerset side currently sit in 10th place in the eighth tier of English football, the highest level they have ever competed, at having won promotion to the Southern League Division One South in 2014.

The closest they have come to promotion from that level came in their very first season in the division, where they went on to reach the play-off final before losing 3-2 to Stratford Town. They currently sit nine points off the play-off places this time round, albeit with games in hand thanks partly to their historic Trophy run.

Their Trophy campaign first began back in October with a 2-1 win over Slimbridge in the Second Qualifying Round, before following that up with a 5-1 win away at Paulton Rovers – both sides plying their trade in the same division as Larkhall.

Next up was a trip to Marlow of the Isthmian League South Central Division, also at step eight of the pyramid but in a different regional division, with Larkhall prevailing on penalties this time after a 2-2 draw.

They were again drawn away from home in the Second Round, facing Wimborne Town – bottom of the division above. Second half goals from Matt Britton and Alex Lambert were enough for the Larks to produce an upset that day, winning 2-1 and setting up a home tie with AFC Totton.

Despite Totton currently sitting 11 points above Larkhall in 3rd place in their division, and having beaten them in the league just two weeks earlier, the side from Bath made history at their Plain Ham ground – coming from behind to book their trip to Edgeley Park.

Half of this cup run has been achieved under new management for the Larks too, as popular manager and former Bristol Rovers player Phil Bater stood down in November after four years in charge at the club, having initially replaced his son Geraint as manager in 2017.

His replacement was immediately named as former player Ollie Price, returning to Plain Ham after a spell managing Mangotsfield United. Price was part of the Larkhall team that won promotion to the eighth tier in 2014 and, not unlike County boss Dave Challinor, has had a fine start to life back at the club he once captained.

His first game back was that impressive away win at Wimborne Town, and he has since gone on to win four of his first six games in charge – losing just once. His return has undoubtedly provided a lift around the club, and he will be hoping to provide them with their greatest ever moment on Saturday, as they look to produce a major upset at Edgeley Park.

Robust midfielder Matt Britton has been the star of Larkhall’s Trophy run so far. A key presence at the heart of their midfield, Britton was Larkhall’s second top scorer last season and has chipped in with six goals so far this campaign – three of them coming in the FA Trophy.