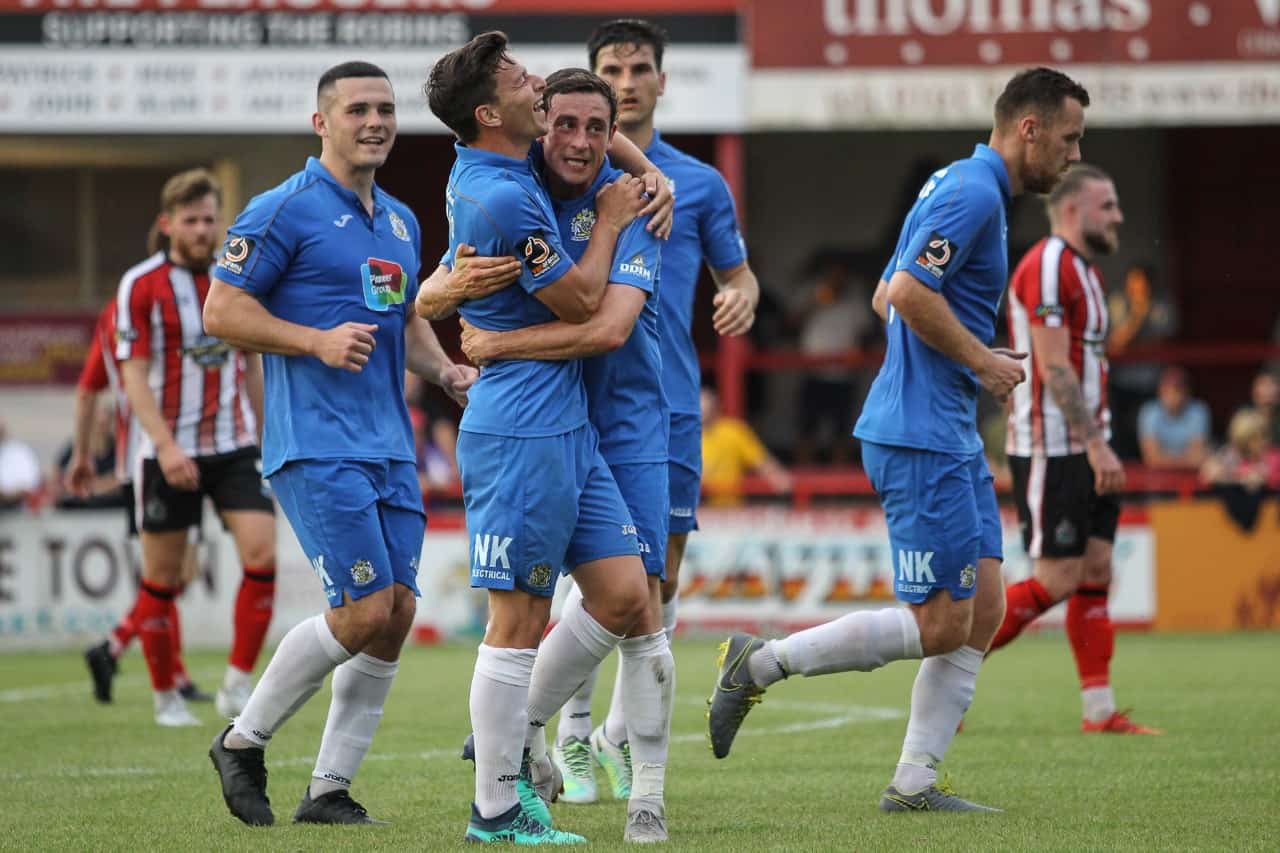 County came from behind at local rivals Altrincham on Tuesday night to record a fourth win in five pre-season games, as goals from Connor Dimaio and Elliot Osborne sealed a fifth straight win over the Robins.

The Hatters made just two changes to the side that drew 2-2 with Guiseley on Saturday, with Dimaio taking the place of Osborne in the Number 10 position, whilst Ben Jackson was selected at left-back, having been given permission by his parent club to play. Recently re-signed Darren Stephenson took a place on the bench.

County won all four games against Alty last season without conceding a goal, and it was Jim Gannon’s men who started the brighter with two efforts in the opening five minutes, Dimaio’s effort bending just wide, before Mulhern drew the first save of the game from home ‘keeper Drench.

Despite the fast start, the game entered something of a lull in the opening exchanges, with both teams visibly struggling in the sweltering heat, resulting in a drinks break on 25 minutes.

It was shortly after the resumption in play that the hosts took the lead, Jordan Hulme taking advantage of a goalmouth scramble to poke the ball under Ben Hinchliffe and in to the net – the first time County have fallen behind in pre-season.

County needed a response – and just eight minutes later they provided it, Dimaio taking advantage of a poor clearance from Paul Turnbull’s free-kick to take the ball down and drill the ball home expertly to draw The Hatters level.

In what was becoming a real end to end contest, both teams created chances to go in to the break in front, Connor Hampson’s ball in just too far ahead of the outstretched Nathan Arnold, before at the other end Dimaio curled another effort just over the bar.

In to the second half and County made two changes at the break, Ian Ormson given 45 minutes in goal, whilst Osborne replaced Turnbull in midfield.

And it was Osborne who was straight in to the thick of the action as County seized control in the second half, with his long range effort forcing a save from the Alty ‘keeper.

As the clock ticked towards the hour mark, County created their best chance of the half, and it was the impressive Ben Jackson – who excelled in his first County appearance – who had the chance, but dragged his effort wide of the far post after running on to Kirby’s cross.

County continued to apply the pressure – but it was Alty who almost retook the lead on the County, with only a fine save from Ormson denying Hampson a goal against his old side – pushing aside the left-backs well struck volley.

County had stepped it up a level since the break however, and deservedly edged in front with ten minutes to go, as Osborne’s shimmied the ball on to his right foot before firing across goal and in to the corner – with a little bit of help from the woodwork on it’s way in.

With little time remaining Altrincham toiled for an equaliser – but in vain, as The Hatters held out comfortably, to leave both sets of fans at the J Davidson Stadium with an overwhelming sense of déjà vu.