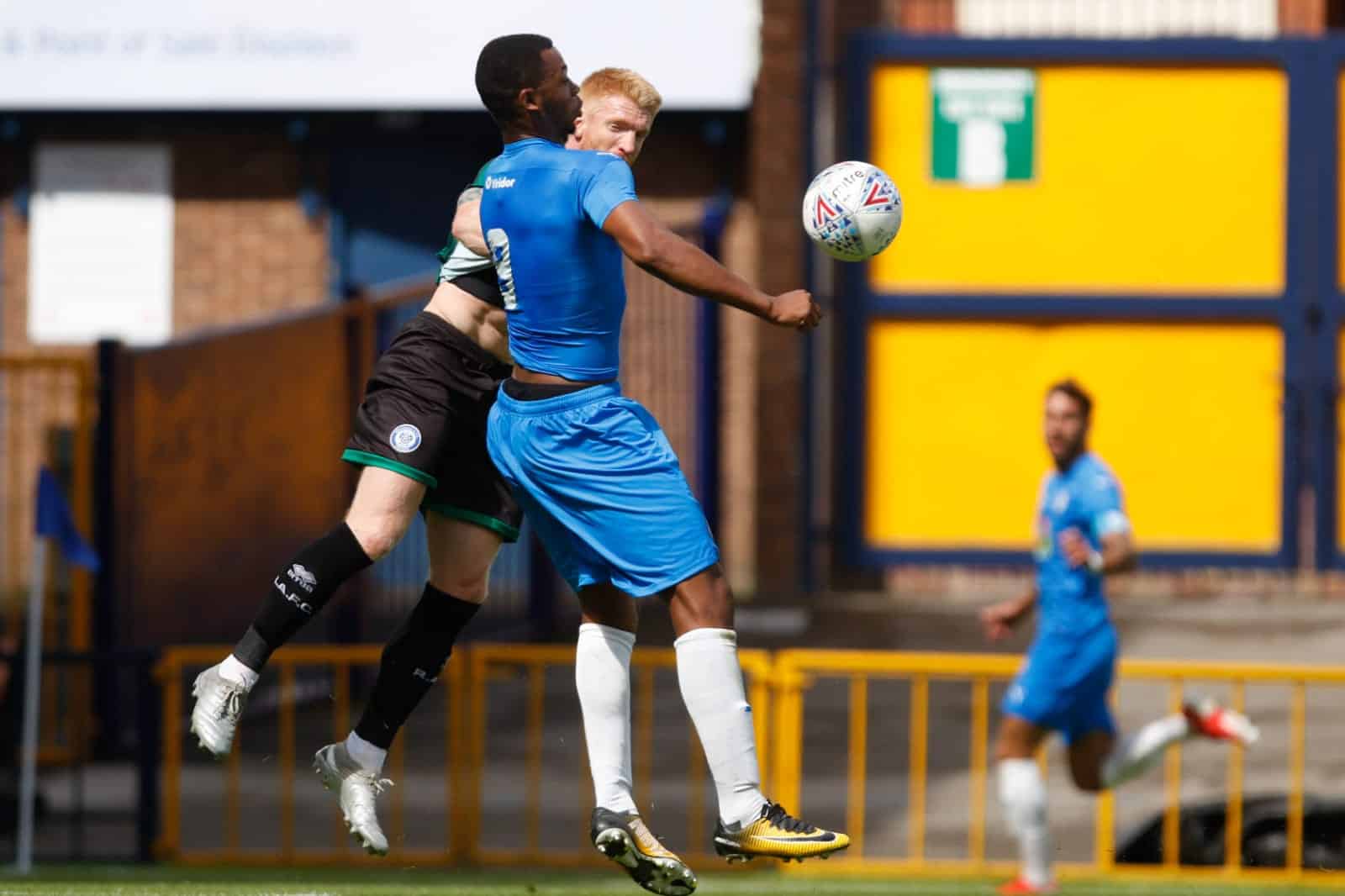 The Hatters returned to action at Edgeley Park for the first time since early March to take on another set of League One opponents behind closed doors in their second pre-season friendly – going down by a repeat scoreline, courtesy of two second-half goals from Rochdale.

As early morning rain gave way to lunchtime sunshine, County took to the field showing five changes from the side that had started against Fleetwood Town at the Carrington training facility seven days earlier. Jordan Williams was among the incoming quintet, as he made his first appearance as a Hatter since arriving in SK3 from AFC Fylde.

Rochdale – for whom former County favourite Jim McNulty featured – made the brighter start, with Jordan Keane having to block a goal-bound effort from Fabio Tavares, and Dale’s summer signing from Chorley, Alex Newby, striking the base of the left post before 10 minutes had been played.

County’s woodwork again denied Newby after 13 minutes, when his free-kick from 25 yards rattled the crossbar – before the Hatters earned the first corner of the contest midway through the first half.

By that time, the newest County arrival, Harvey Gilmour, most recently of Tranmere, had been introduced – although an early slip on the greasy surface by the midfielder just after the half-hour mark let in Matty Done, who drilled narrowly wide of the left upright.

Jimmy Ryan’s shot from distance was palmed behind by Ben Hinchliffe – before Tavares, with a couple of first-half minutes remaining, beat the offside trap to connect with Matty Lund’s delivery, but fired his first-time effort beyond the right post from close range.

For the second Saturday running, County fielded a completely different line-up after the break, although it was a second-half Dale arrival, Kacper Mialkowski, to whom the first scoring opportunity fell – with the Polish-born youngster drilling just shy of the right post.

As the hour approached, Mialkowski made his presence felt to more telling effect – in the form of a surging run from his own half and a through-ball to fellow substitute Kwadwo Baah. The latter’s subsequent shot was well parried by the Trialist goalkeeper, only for the ball to find Lund and squirm off his boot over the line to give the visitors the lead.

Dale struck the woodwork for a third time, as Jimmy Keohane’s looping header bounced off the bar – before Jay Lynch, at the other end, dived to smother Alex Reid’s low half-volley, and his counterpart in the County goal did likewise to keep out Baah.

Reid saw another attempt blocked – before Paul Turnbull’s snap-shot on the rebound was deflected over, and Lynch did well to claim the resulting corner.

But Baah had the last word after an impressive half – collecting a corner on the edge of the box from the left, and firing home through a crowded area to double the advantage.