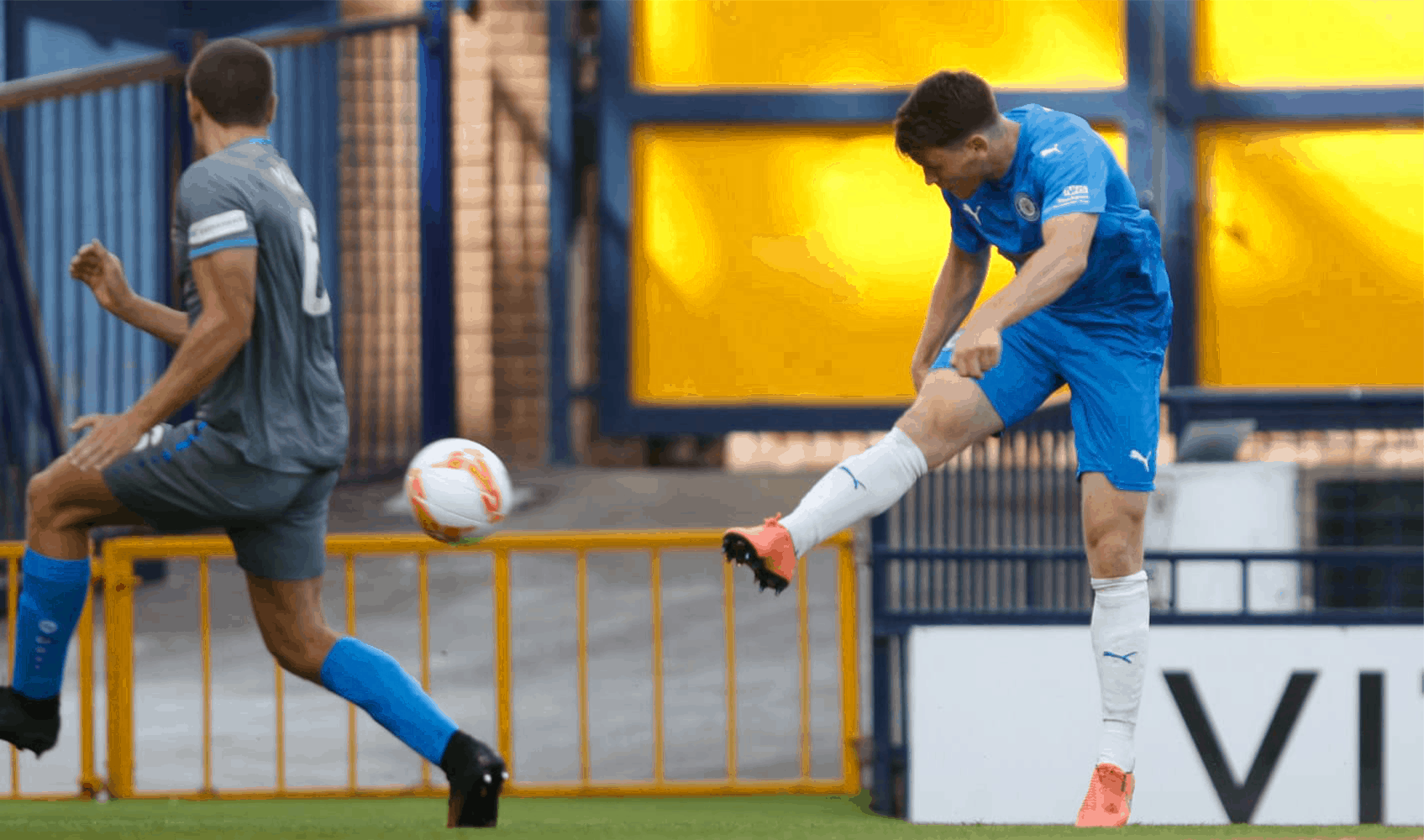 The Hatters returned to action behind closed doors at Edgeley Park for the first time since late August – and registered a third successive friendly victory, without conceding, against Tameside near-neighbours Curzon Ashton.

Alex Reid and Adam Thomas each scored a second goal in pre-season during a first half that County dominated to see off the National League North visitors.

County took to the field showing six changes from the side that had kicked off at Colne a week previously – with recently-signed goalkeeper Josh Barnes making his first start between the sticks. A pair of ex-Hatters – namely, one-time Bury loanee Marcus Poscha, and the long-serving former captain Paul Turnbull – both featured for the visitors.

Mark Kitching fashioned the game’s first chance after five minutes, courtesy of a well-struck half-volley from the left that Cam Mason smothered cleanly. And the ‘Nash’ ‘keeper was shortly in action again to palm away Nyal Bell’s header from a James Jennings corner on the right.

Just over 10 minutes later, the Hatters went ahead – following a mix-up in the visitors’ defence that saw Reid pick up an under-hit back-pass, before rounding Mason and slotting home.

Reid turned provider around the half’s midway-point with a low cross from the left that Bell fired high and wide of the far post. And Thomas half-volleyed over, after Mason, under pressure from Reid, punched the ball out towards the edge of the area.

With half an hour played, the County pressure continued: Bell’s through-ball found Kitching, whose shot cleared the Railway End crossbar; Mason saved with his legs from Sam Minihan at close range; and Kitching went closer still with a thunderbolt that rattled the bar.

As half-time approached, Curzon’s first attempt on target was of the dead-ball variety – and from a County legend, as Turnbull’s 25-yard free-kick was gathered by the diving Barnes.

But the Hatters, precisely as they had done at Colne, had the last word ahead of the break to go two-up through Thomas, who latched on to Kitching’s cross from the left before drilling a low shot past Mason.

County resumed after half-time with just one change, as Richie Bennett replaced Bell in attack. But the opening stages of the new half saw The Nash in the ascendancy up front, as Barnes and Ash Palmer kept out goal-bound efforts from, respectively, Dale Whitham and Douglas Tharme – and Craig Mahon’s shot was deflected narrowly shy of the right post.

Up the other end, Reid cut in from the right to blast over – and his replacement after the hour, Connor Jennings, headed John Rooney’s corner from the left just past the far upright, before unleashing a low drive that fizzed just beyond the opposite side of goal.

Another substitute, Jordan Williams, fired wide on the left, following a well-worked County move from the far flank. And Connor Jennings forced Mason to parry behind, as the Hatters strove to add to their first-half tally.

In the event, they did not trouble the scorers further – but completed an accomplished workout with a clean sheet after Whitham failed to convert a consolation  with the final kick of the game.