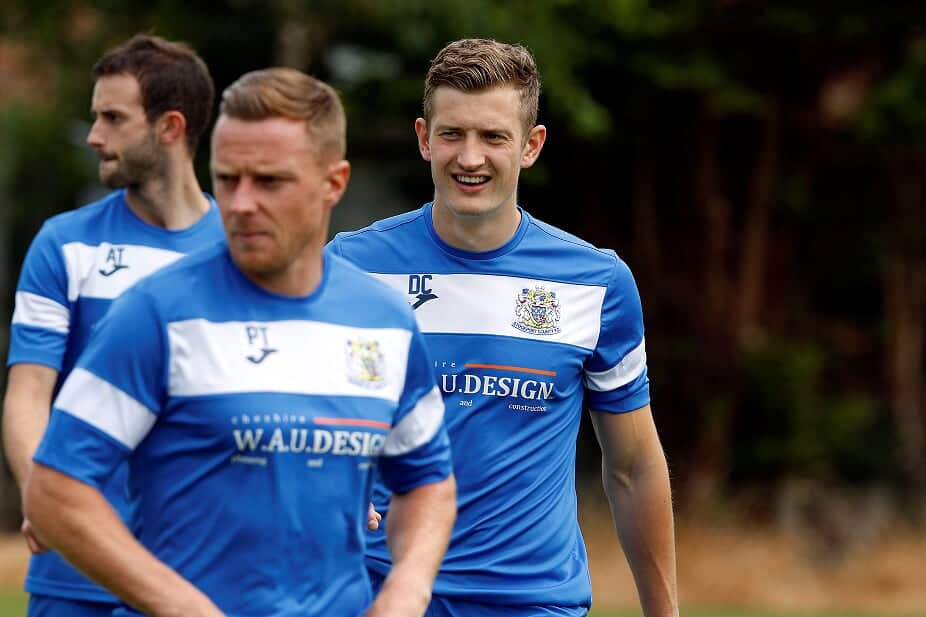 Never More Close To Winning At Nethermoor, As Lions Claw Their Way Back

The Hatters conceded their first pre-season goals, and saw their three-match run of friendly victories come to an end, following a fightback by the ‘Lions’ of Guiseley at Nethermoor.

Second-half goals from Frank Mulhern and Jake Kirby looked to have put County on course for a first-ever win against the National League North hosts, who then netted twice in the final quarter of an hour to earn a deserved draw.

Taking to the field for the first time in shirts displaying their newly-announced squad numbers and – after a six-year wait to re-join non-league’s top tier – the return of player names on the back, the Hatters featured just one change in the starting line-up from that at Curzon Ashton a week previously, with Elliot Osborne replacing Connor Dimaio in the number 10 position.

Former Hatter Kaine Felix looked lively for Guiseley in the opening stages, and, after only seven minutes, he rounded Ben Hinchliffe before firing into the near side-netting from a tight angle on the right. Three further forays by the home winger were then well blocked by Dan Cowan.

In a half of few other chances for either side, County went closest just before the break when good work on the left by Osborne resulted in his effort that cleared the Lions’ crossbar.

The Hatters introduced left-back, Matt Taylor, most recently of Oxford United, upon the resumption – and, thanks in no small measure to another, albeit opposing, trialist, they took the lead five minutes later.

Paul Turnbull’s delivery over the top looked to be heading straight for collection by the home goalkeeper – and so it did, only for the unfortunate, anonymous custodian to slice his attempted clearance into the path of Mulhern, who steadied himself before tapping into an empty net.

The ‘keeper partially atoned for his error within another five minutes – doing well to parry away a shot that leading pre-season scorer Kirby had unleashed from 12 yards after cutting in from the left. But, with just under 20 minutes remaining, he was powerless to keep out the same Hatter’s further strike from a similar angle and distance, following a deflected through-ball by Dimaio.

With the Hatters two goals to the good, and fewer than 15 minutes left on the clock, a fourth successive friendly triumph, and a first anywhere over the Lions, appeared a fair bet – but the latter, following their first corner since the interval, promptly halved the arrears, as Scott Garner headed into the near-side corner Gabriel Johnson’s deep, lofted delivery from the right.

County had the ball in the net at the other end three minutes later – and in a manner reminiscent of the opening goal – with Adam Thomas slotting home after the ‘keeper had again fluffed his lines, but the whistle had already gone for an infringement.

Then, five minutes from time, the Lions enjoyed one last hur-roar – courtesy of their equaliser that Johnson converted at close range from Jamie Spencer’s cross on the right.