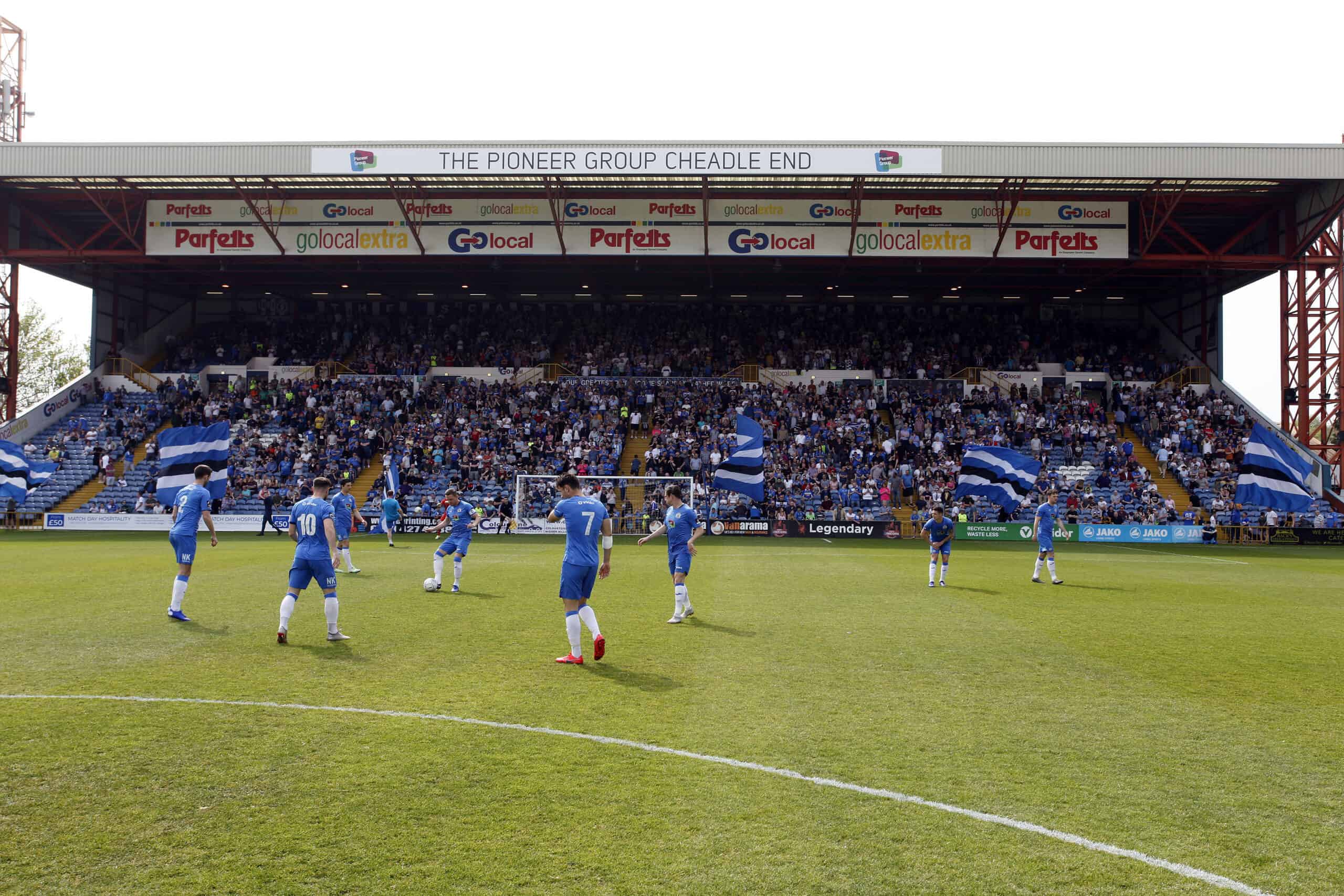 Yesterday was the 25th birthday of our beloved Cheadle End!

Previously, it had been concrete steps until the 5,044-seater stand was built prior to the 1995-96 season.

On July 31st 1995, it opened with a pre-season friendly against Manchester City. Just over two weeks later, it saw its first competitive match, a 1-0 League Cup win over Wrexham with Alun Armstrong scoring the winner.

Over on our social media channels, we asked you about your greatest stories and memories of the iconic stand. Here’s what you had to say…

Here’s what a few people said about the time passed:

@ste_hopwood – “Make me feel old this”

Linda Thompson – “Can’t actually believe this was 25 years ago 😱.”

@DaveLong79 – “I remember that friendly against City, practically ran up the steps to my new season ticket seat in UT3.”

@whiting_steve – “Sitting in the Cheadle End with my mate and his son and assorted mates, I was conversing with afore mentioned mate. Adjacent season ticket holder “Mary” told me off for talking during game! I am therefore the only fan to be told off for chatting in game time!”

@BrettAngellsle1 – “Seeing a lad jumping over seats to get out quicker and catching his foot on the top of a seat then cart wheeling down 5 rows watched by hundreds, funniest thing ever.”

@bennett_ianmcfc – “Working in it and looking after the lads around me as a steward.”

@_RossHall – “Archies first view coming up the steps at the start of the CHAMPIONS season, deffo must be good luck.”

@penno639 – “Sitting in the new stand for every home game of the 96/97 season (apart from when we had free tickets from school for the Vernon stand) with my Uncle Alan. Sadly not with us anymore but he has a commemorative brick at the back of the Cheadle End now 🎩🎩🎩 .”

@LukeChels – “We played Sheff Wednesday and they filled out the away end, I’d just spent nearly £100 on a new hat, we equalised and the lad next to me took it off my head and threw it in the away end 🤷‍♂️💙.”

@AndyHalliwell – “Just before it was finished my dad and I went to the ground for tickets. Dad in his shirt & tie, me in jeans & tshirt, we ventured to the top tier of the unfinished stand. Another guy politely asked us if he could go up and have have a look, thought we were architect & foreman!”

@JohnBourkescfc – “Sat in lower tier 3 on a night game, my mate got hit by a stray shot giving him a full on nose bleed. Great memory and one we still talk about today.”

@stockportjr – “John Hardiker’s goals & the 0-1 down, 2-1 up and the aftermath against Man City all good stuff. We had a laugh & they got promoted.”

@CMeddows – “Can’t remember who we played but there was a crazy storm, I was getting we stood at the back! Think they had to stop the game.”

@DotNetDave82 – “Banging the back of the stand so hard that my friend broke his hand.
Watching the news of THAT Spennymoor goal ripple around the whole crowd.
Ian Moore bursting through the Wolves defence for an injury time 3-2 winner, a few yards in front of me and my Dad on Boxing Day.”

@rodinrichards – “1. The news of Spennymoor’s goal filtering through the stand
2. Spotting Les Battersby sneak out when we go 3-0 up against City
3. Final whistle vs Carlisle in ‘06.”

@mrbentaylor – “That Alun Armstrong equaliser against Everton was pretty special. The place went off! We won’t mention what happened just after 🤐😭”

@rhys_pb – “I would obviously pick Curzon but my favourite ever memory would be against Brackley last minute Frank Mulhern 96th minute header to draw was an amazing atmosphere!!!”

@donk82 – “I cleaned all the seats of dust with a few other kids from the area when it was ready to be open for a freebie from the club shop kept us outta trouble for a few hours 😂.”

@stefc18832018 – “There are way too many special moments for different reasons. But I’m saying Curzon as I was with my lad and there is no one else I would rather have been with at that moment in that stand.”

@janeh.arding – “Well there’s been many football moments but I have to get sentimental and say being there supporting County with my dad and grandad, then. the generations moved up one and there was me with my dad and son (who was more interested in the pies I’m afraid but I’m working on him)!”

@peter.beeston – “Wycombe to get to Wembley in the play-off final and our first win there!!!”

@rawpaw75 – “One memory that springs to mind was seeing the guy who played Les Battersby walk out in front of all the County fans in the Cheadle End whilst watching us take City to the cleaners.”

Stephen Moore – “Started watching regularly in 1999/2000 season, but sat with parents in Main Stand. Until Christmas we were unbeaten at home and were sitting 6th in what is now the Championship.. Then for the first game of the New Year, I couldn’t get a ticket in advance and had to sit in the Cheadle End. Hated it. Really cramped, and to make matters worse we lost that match (against Palace); barely won another point all season; and narrowly avoided relegation. I still blame the ticket office staff for being inflexible and breaking the spell…”

Ryan Dempsey – “Iain Moore scoring the winner against Wimbledon in the 4-3 thriller. That was a roller coaster game, can’t remember the year but I do remember the game vividly!”

Edward Keane – “Being in it for Hardiker’s double, the West Ham game, Wycombe in 97 and 08, the Carlisle game. Watching from the Popside as it erupted in the last 5 minutes of the Curzon, seeing it so full for the Spennymoor game as we broke the record – and feeling so proud. But there are many more unmentioned.”

Jackson Massey – “The 3-1 win over city just a pity shooting towards the railway end 1st half.”

Stephen Davies – “Playing the titanic on the last day of the season when City got relegated 👏.”

Alan Smith – “My Dad died in August 1997 and 29th November would have been his next birthday. I was delighted that we beat Manchester City 3 -1 on that day.”

Eddard Powell – “Hearing the news run through the crowd about *that* Spennymoor goal.”

Andrew Croxford – “Not paying attention when carrying a coffee and coke back to my seat and getting leathered by a wayward shot prematch 😭😭.”

Here’s a few of our favourite photos from recent times…