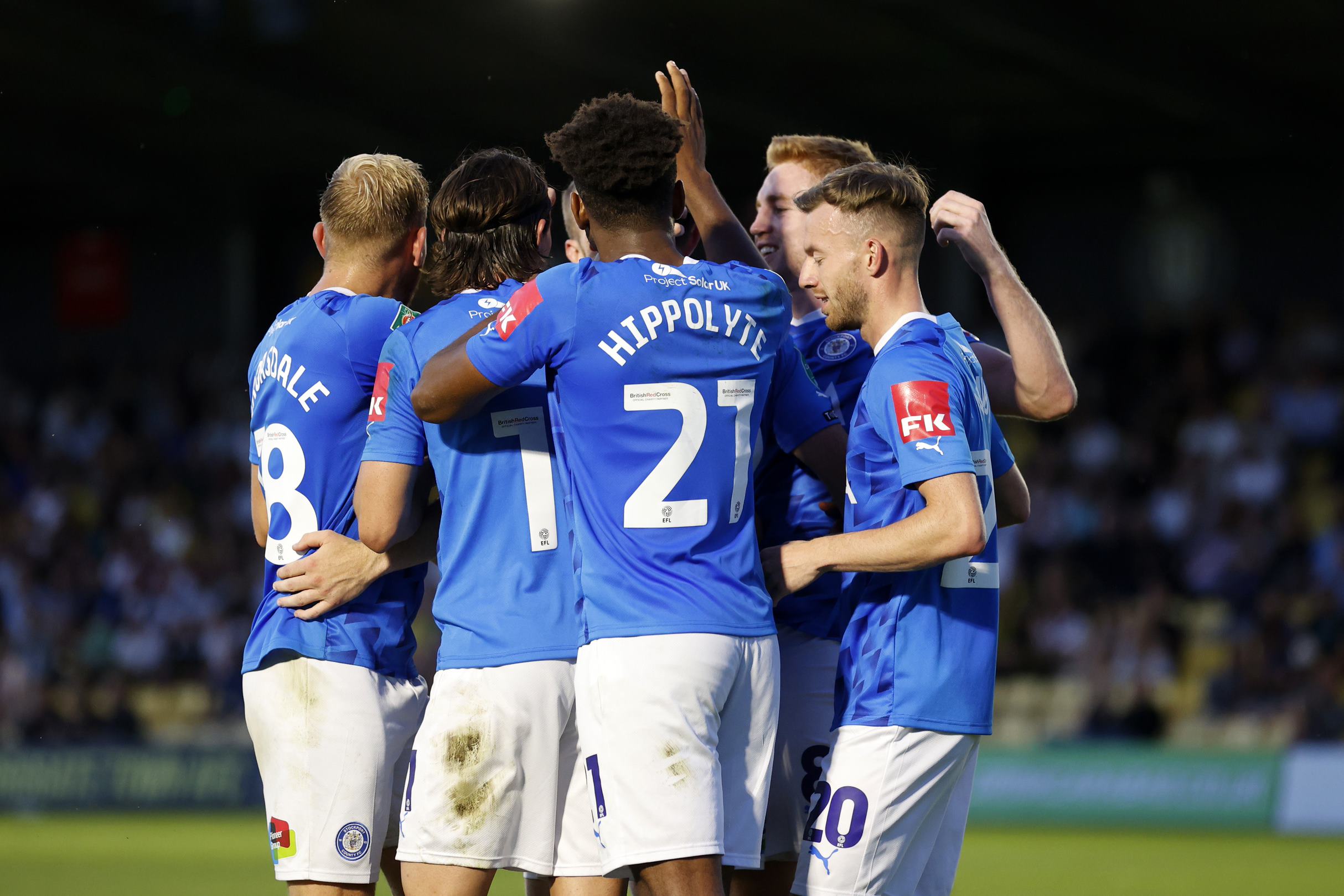 County will be looking to build on our first win of the new season in the Carabao Cup on Tuesday night, as we welcome Colchester United to Edgeley Park looking for our first three points back in the Football League.

Connor Jennings’ penalty at the EnviroVent Stadium secured a much-needed win for Dave Challinor’s side after opening the league campaign with successive defeats, and has set up a mouth-watering second round clash with Premier League Leicester City at Edgeley Park.

It was a much-improved performance from County on the night, and the nine players that came into the team will have given the manager a lot to think about heading into this weekend’s game.

Visitors Colchester will also be looking for their league win of the season after opening with one defeat and one draw, but Wayne Brown’s side secured a great win of their own in midweek as they knocked out League One Ipswich Town away from home, winning 1-0 at Portman Road.

They too will face Premier League opposition in the next round, hosting Brentford at the Colchester Community Stadium. In the meantime however their focus returns to league action, as they look to win at Edgeley Park for the first time since 2008.

The U’s are now into their seventh successive season in League 2, after relegation from the third tier in 2016. Their performances in that time have seen them finish as high as 6th in 2020, their one appearance in the play-offs in that time, and as low as 20th in 2021.

The Essex side began last season under the management of Hayden Mullins, who took charge in what was his first full-time managerial role, after a brief spell as interim manager the previous year and two spells as caretaker boss at Watford.

The 42-year-old would win just five of his 24 league games in charge however, and was sacked in January with the side sat 22nd and just three points above the relegation zone, in real danger of dropping into non-league for the first time in 30 years.

His replacement was Maldon and Tiptree boss Wayne Brown, who came in for his third spell as the Club’s interim-manager after previous spells in 2015 and 2021. He has also previously coached the Club’s U18s and U23s sides, as well as making over 150 appearances for them as a player.

It was third time lucky for Brown, who won nine and lost only seven of his 22 games in charge to steer Colchester well away from the relegation battle, eventually finishing 15th – 17 points clear of the relegation zone. It was enough to earn the 44-year-old the job on a permanent basis in the Summer.

Over the transfer period, the Club have retained the majority of their squad from last season, with just four new additions so far. Alex Newby, brother of County man Elliot, has joined after leaving Rochdale, whilst former County loanee Kieran O’Hara has also joined from Fleetwood.

He has yet to be involved between the sticks however, as fellow new signing Sam Hornby, signed from Bradford City, has established himself as the Club’s #1. 22-year-old Ossama Ashley was the their other addition, joining from West Ham.

They were handed a tough start to the new campaign with a trip to play-off semi-finalists Northampton Town first up, but they came very close to grabbing a point, twice equalising before going down to an 89th minute goal from Ryan Haynes.

They followed that up with a 1-1 draw at home to Carlisle United a week ago, before that smash and grab win at Ipswich in midweek. The side had just 22% possession and two shots in the game, but showed great resilience to grind out the result under intense pressure from their League One opponents. Brown, much like Dave Challinor, will now be hoping his side can carry the momentum from that win back into the league campaign on Saturday.

After missing out in midweek with a knock, Colchester fans will be hoping to see their main man Freddie Sears back in the starting line-up this weekend. The former West Ham youngster re-joined the U’s last Summer after six years at Ipswich, having previously had a loan spell with the Club back in 2012.

Sears was the Club’s top scorer last season, hitting 17 in all competitions – 14 of them coming in League 2. Only six players scored more than him in the division that year, and his goals were crucial in steering the Club away from the relegation battle.