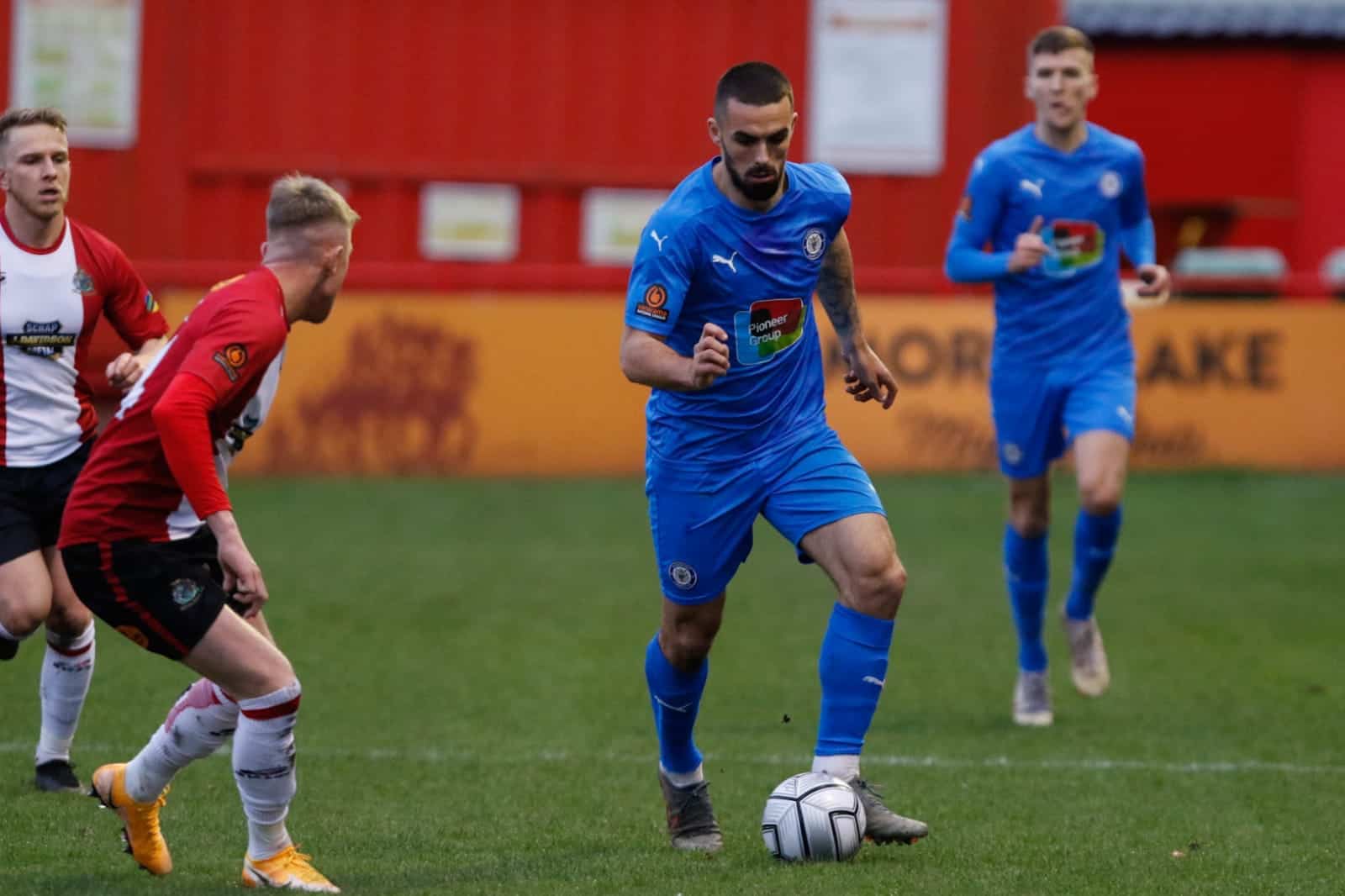 The Hatters’ final, and most local, away game of 2020 saw them return the short distance back to SK3 from Altrincham with a point, after two disappointing National League defeats on the road in succession.

Connor Jennings’ equaliser nine minutes from time secured the draw that their efforts more than merited, after they had gone behind midway through the first half.

County took to the field on a mild Boxing Day afternoon showing three changes from the side that had suffered a two-player deficit and a four-goal defeat at Hartlepool, with the pair of suspended Hatters – Ash Palmer and John Rooney – as well as Richie Bennett (who was named among the substitutes) being replaced by Jennings, Lois Maynard and Adam Thomas. Connor Hampson and Matty Kosylo, who had both been on the books at Edgeley Park in years gone by, started for the ‘Robins’.

The sides earned a corner apiece in the opening half a dozen minutes, before Alex Reid unleashed the contest’s first shot of note – swivelling and firing just wide of the far post. And Sam Minihan, who had teed up Reid following good work on the right by Thomas, subsequently drilled a low drive beyond the other upright.

Around the half’s mid-point, the hosts broke after clearing a County corner to fashion their first opportunity – as Tom Peers, from the left, squared for Josh Hancock to curl his shot past the left post. A couple of minutes later, they repeated the feat – but this time went one better, with Kosylo playing on the counter and feeding Yusifu Ceesay, who ran on to the ball from the left to slot past Ben Hinchliffe and give Alty the lead.

The Hatters’ first effort to get back on level terms came courtesy of Ryan Croasdale, whose snap-shot, from a Minihan delivery on the right, was parried by Tony Thompson. The home goalkeeper and captain then held on to a shot from Reid at the second attempt – and finally punched away a dangerous Mark Kitching cross from the left, as the Robins continued to hold their advantage at the break.

Upon the resumption, County, having been on the front foot for significant spells in the first half, opened the second in similar vein. Croasdale drilled an attempt beyond the left post, before the hosts – again seemingly content to counter on the break – responded with a Peers shot from distance that skimmed away to the right of goal.

Minihan went close with a low shot from the right that was deflected beyond the near post  by Harrison Holgate, and Thompson saved from Maynard at point-blank range, as County proceeded to dominate in both attack and the corner-count, but without finding the net.

But with fewer than 10 minutes remaining, the Hatters got the goal they deserved, as Jennings – who had earlier seen a header cleared off the line – stole in at the near post to flick home a corner from the right by Jordan Williams.