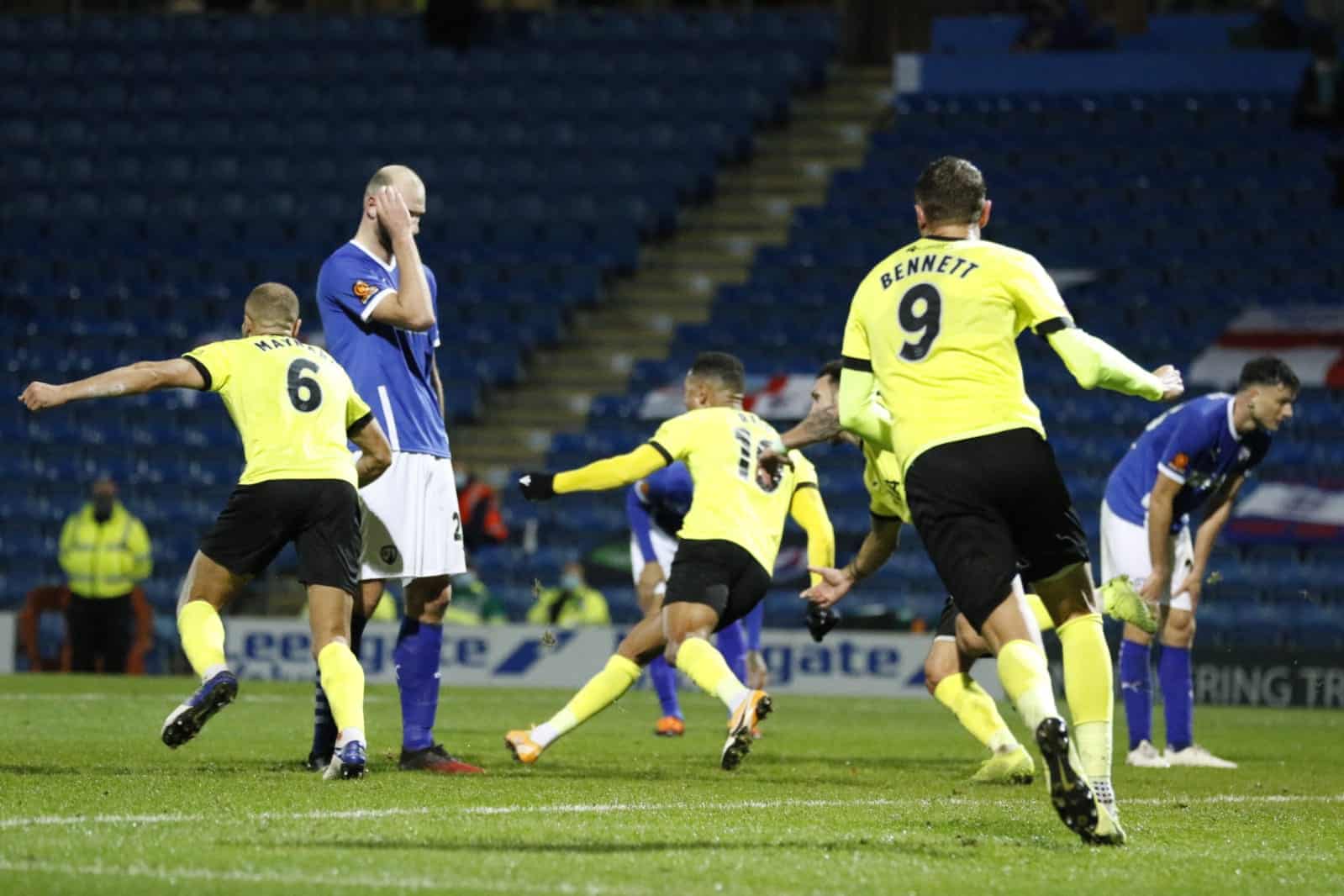 The Hatters’ second game on the road in four days, and their first in Chesterfield for almost a decade, saw them come away from North-East Derbyshire as National League leaders, following a fourth successive win.

Goals from Mark Kitching and, five minutes from time, substitute Alex Reid secured the three points and an inaugural triumph, by the odd goal in three, at the 10-year-old Technique Stadium.

County took to the field showing two changes from the side that had enjoyed a five-star victory at Wealdstone four days previously. Kitching and Jamie Stott were the players to return – replacing James Jennings and Reid, who both dropped to the bench.

A later 5:20pm start, to accommodate live television coverage, also saw the Hatters kick off knowing that, with the remainder of the afternoon’s programme already completed, a win would take them to the top of the table on goal difference.

Tom Denton, a long-time scourge of County defences, was leading the line for the hosts – and, with just a minute on the clock, the beanpole striker curled a shot wide of the left post in an early attempt to emulate, as a Chesterfield player, his scoring achievements against the Hatters for Alfreton, Halifax and North Ferriby.

County’s first chance of note arrived 10 minutes later, when Kitching squared from the left to Richie Bennett, whose first-time low strike fizzed beyond the far upright. And shortly afterwards, following a corner, Lois Maynard headed an effort under pressure into the arms of home goalkeeper Kyle Letheren.

Denton had the ball in the net after slotting past Ben Hinchliffe with 17 minutes on the clock, only to be flagged offside. And within another three, County went ahead – courtesy of Kitching, who cut in from the left before firing a well-struck, right-footed shot from the edge of the box that rocketed past Letheren and into the far corner of the net.

Three minutes later, the Hatters looked for all the world to have earned a penalty after Liam Hogan’s shot towards goal struck the arm of home captain Will Evans – but Referee Miller was unmoved by both the incident and subsequent County protests.

The contest opened up with chances at both ends – as Letheren dived to smother a low drive from Sam Minihan, Evans headed over after connecting with a  free-kick by Liam Mandeville into the County area, and Connor Jennings unleashed an attempt that cleared the other crossbar.

With nine minutes remaining of the half, Chesterfield drew level. Another Mandeville free-kick led to a brief game of pinball in the box, before a partial clearance towards the ‘D’ saw Jordan Cropper fire home through a sea of players and past the unsighted Hinchliffe.

The Hatters’ hearts were in their mouths as half-time approached, and once again a set-piece, headed on by Denton, ended up in the net – although, thankfully, the goal was ruled out for offside. And, in added time, County went close to regaining the lead – but Ash Palmer’s goal-bound header from an in-swinging John Rooney corner on the left was tipped over by Letheren.

Jordan Keane fired wide of the right post, following more good work down the opposite flank by Kitching, within a minute of the resumption. And half a dozen minutes later, Hinchliffe dived to deny Luke Rawson, who had cut in from the right, before Jonathan Smith fired over another shot for the hosts from a similar position.

County sought to respond through Rooney, but the hat-trick hero at Wealdstone drilled just shy of the near post after latching on to Minihan’s low cross from the right. And Denton headed beyond the left upright, as the end-to end fare of the second half continued.

Reid was introduced to bolster the attack, and went close with 10 minutes remaining when his shot was parried by the legs of Letheren. But five minutes later he went one better, heading in off the bar, after a mighty rumble in the home area that had seen Palmer and Bennett each strike a post and an additional effort from Lois Maynard cleared off the line.

The Hatters proceeded to play out five minutes of added time without incident, and, as table-toppers will now turn their minds to the FA Cup a week hence – against today’s hosts at Edgeley Park.