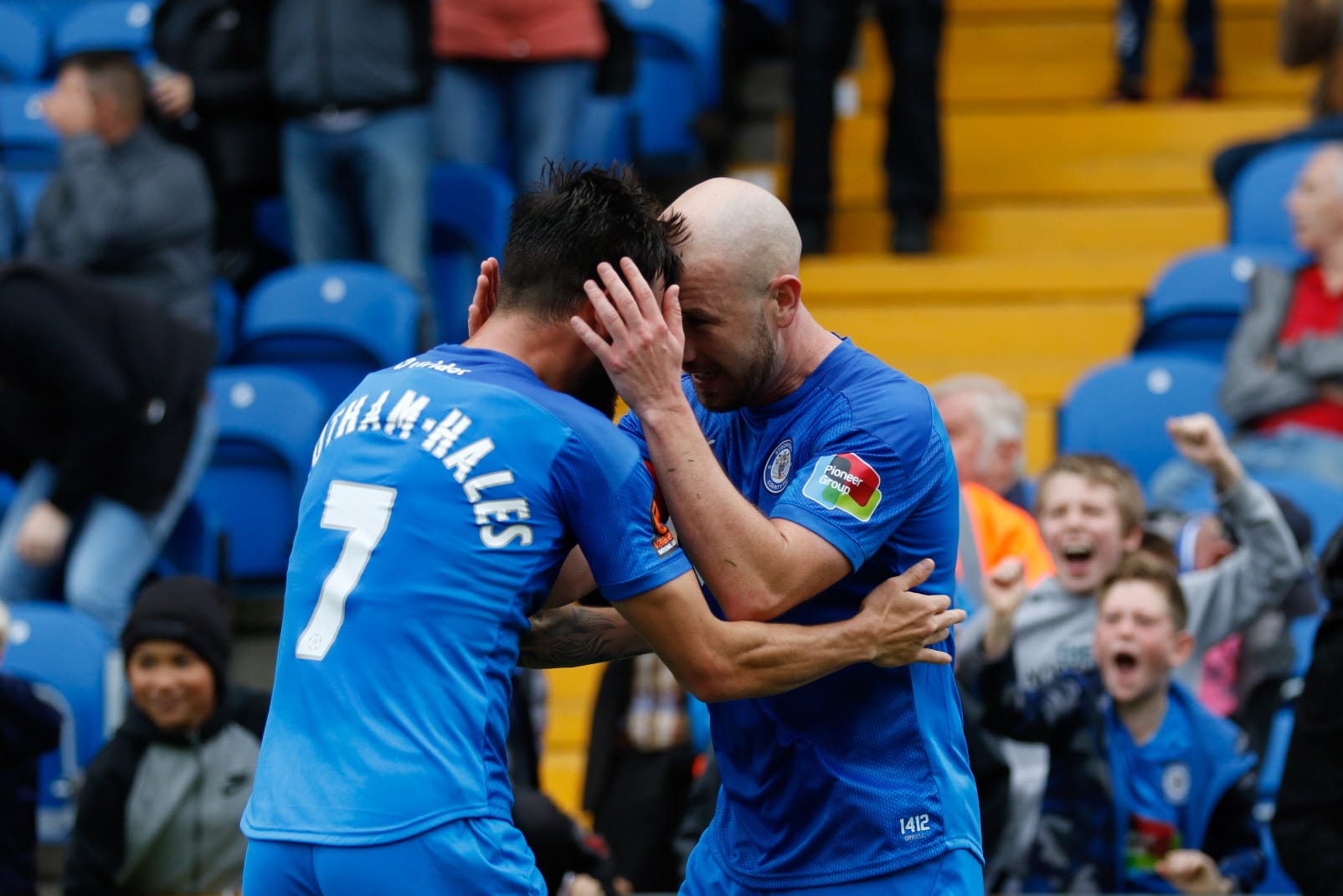 The Hatters made it three wins in a row by seeing off struggling Aldershot Town with a single-goal victory at Edgeley Park.

It was also a first-ever home triumph for County over the 29-year-old phoenix club from Hampshire, which came courtesy of a header by Paddy Madden on the stroke of half-time.

The Hatters took to the field showing three changes from the initial line-up at Weymouth one week earlier. Zeki Fryers and Jordan Keane both returned from injury, and the previous Saturday’s match-winner Ollie Crankshaw was handed his first start – with Liam Hogan, Ethan Pye and Alex Reid the players to make way, and Madden taking the captain’s armband in Hogan’s stead. Striker Scott Quigley, who had not played since suffering from a hamstring problem at Southend on August Bank Holiday Monday, was named among the substitutes on a bench that also included the regular skipper and Reid.

The first half was fast approaching its midway-point, when the inaugural chance of the afternoon was created. It fell to County, following good work on the right by Crankshaw, whose cross to Madden was deflected into the path of Macauley Southam-Hales for a snap-shot that was caught by visiting goalkeeper Mitch Walker.

Shortly afterwards, at the other end, Corie Andrews went close with an effort from the right that took a deflection into the side-netting. And the striker, after playing a defence-splitting one-two with Toby Edser, was denied again just before the half-hour mark, when Ethan Ross came off his line to tip the ensuing shot around the right post.

The game was opening up – with the next opportunities falling to the Hatters at the Cheadle End, where they had not scored in a competitive match with supporters present for nearly 20 months. Ryan Croasdale volleyed wide of the left upright, and Southam-Hales blazed over following huge shouts for an Aldershot handball that were waved away by Referee Paul Marsden.

Andrews caused County problems once more on the right, before unleashing a low delivery across the face of goal – with which Wassim Aouchria just failed to connect – but the Hatters were to have the final, and decisive, say of the half as it entered time added on.

A free-kick by John Rooney on the left was passed short to Ben Whitfield, who proceeded up the flank before crossing for Madden to head home inside the far post for his third goal in as many games – not to mention a first one at the home end in league or cup since pre-pandemic times for the County faithful to savour in person – and put his side ahead, going in at half-time.

Buoyed by their late first-half opener, the Hatters went in search of another goal after the break – with Southam-Hales letting rip with a shot from the right that Walker smothered in front of the near post.

County went closer still to doubling the advantage, following a Rooney corner from the left – with which Crankshaw initially connected, before Mark Kitching headed against the crossbar. And, a few minutes past the hour, Whitfield twisted and turned before shooting straight at Walker.

Walker’s opposite number, Ross, had his hands stung by an Alfy Whittingham shot, before  recent signing and substitute for the visitors, Mikael Ndjoli, struck County’s right post – and Andrews and Kodi Lyons-Foster respectively drilled and headed narrowly wide of the same upright.

Six minutes of added time – primarily because of an earlier injury to Lyons-Foster – hardly did wonders for any County nerves there might have been. But the Hatters held on without further ado for their hat-trick of wins and a move back up into the National League’s top 10.