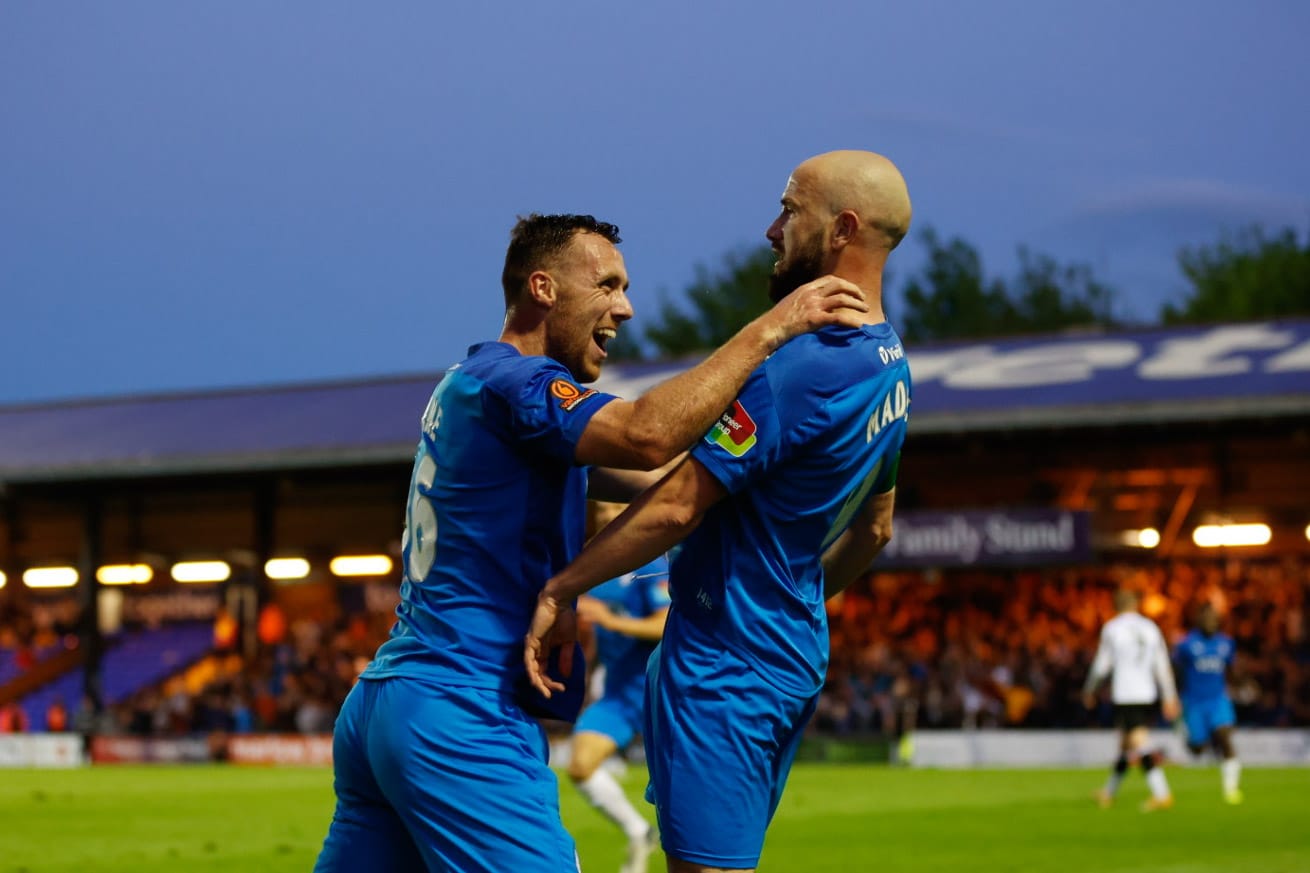 The Hatters’ National League title prospects were hugely boosted, following a single-goal triumph over Torquay in the penultimate regular match of the campaign at Edgeley Park.

Another goal by leading scorer and acting captain, Paddy Madden, once again made the difference – propelling the Hatters back to the top of the table, three points ahead of Wrexham, and leaving them needing a draw in their final match against Halifax to make sure of automatic promotion.

Showery rain from earlier in the day had given way to evening sunshine as County took to the field, showing three changes from the line-up that had started at Wrexham three days previously. Zaine Francis-Angol was handed his National League debut as a Hatter, Will Collar returned from suspension and Andy Cannon was recalled – with Liam Hogan and Scott Quigley (both of whom were named among the substitutes), as well as Ryan Rydel, the players to make way.

The Hatters fashioned the first opportunity of the night after a couple of minutes – with Jordan Keane delivering a low cross from the right to Madden, whose first-time shot was blocked by right-back Ben Wynter.

The visiting ‘Gulls’, who had last suffered defeat at EP in 2006, responded five minutes later with their first attempt, as Danny Wright glanced a header wide of the right post at the Cheadle End.

A bigger chance then came County’s way, as Madden’s through-ball found Myles Hippolyte – but the latter’s shot was deflected over by visiting goalkeeper Shaun MacDonald. And following half a dozen further minutes, Hippolyte turned provider – squaring to Collar, who blazed over.

The Hatters continued largely to dominate in possession – but while their approach play was promising, they looked to lack a cutting edge in the final third, with Keane, Antoni Sarcevic and Hippolyte going closest courtesy of their respective efforts that fizzed past the right post, narrowly cleared the crossbar, and spun beyond the left upright.

With the half drawing to a close, County finished it more strongly. A Sarcevic free-kick from just outside the Torquay area was headed clear by Connor Lemonheigh-Evans, before Madden saw a goal-bound shot saved by the left leg of MacDonald, and Collar was denied on the line by central defender Ali Omar.

The teams re-emerged under the lights, with the visitors making an enforced change between the sticks following a late first-half injury to MacDonald. Taking his place as Torquay’s Number One was Mark Halstead, who had played four times for County in 2011 whilst on loan from Blackpool.

The Hatters began the second half in much the same attacking mode as they had ended the first – and Halstead was soon called into action to hold on to Collar’s downward header, after the midfielder had connected with a Francis-Angol cross from the left.

Halstead brilliantly parried another headed effort from Collar, following a delivery by Sarcevic on the right. But just as the visitors’ goal was looking to enjoy a charmed life, County made the vital breakthrough four minutes after the hour – as Elliot Newby wove his way from the right towards the six-yard box, and squared for Madden to slot home from close range.

Madden and County came close to doubling the advantage shortly afterwards, when the skipper’s header from a Sarcevic corner on the left was cleared off the line and scrambled away beyond the far post. Torquay’s second corner of the contest also caused no little consternation, when a delivery from captain Armani Little found Joe Lewis in space – only for the defender to head over.

With all their substitutes used, the Gulls played the final half a dozen minutes with 10 men after Little limped off. County, meanwhile, had brought off the bench Ollie Crankshaw, who promptly fired his first effort into the left side-netting, and stung Halstead’s hands with a second.

Further, late drama at each end ensued, as Halstead performed more wonders against his former club by deflecting a Hippolyte effort over at point-blank range, and, with added time approaching, Wynter headed on to County’s bar, following a shot by Stephen Duke-McKenna.

[Debut for Zaine Francis-Angol, with a unique SCAN (Stockport County Appearance Number) of 1430.]

Man of the Match: Madden.