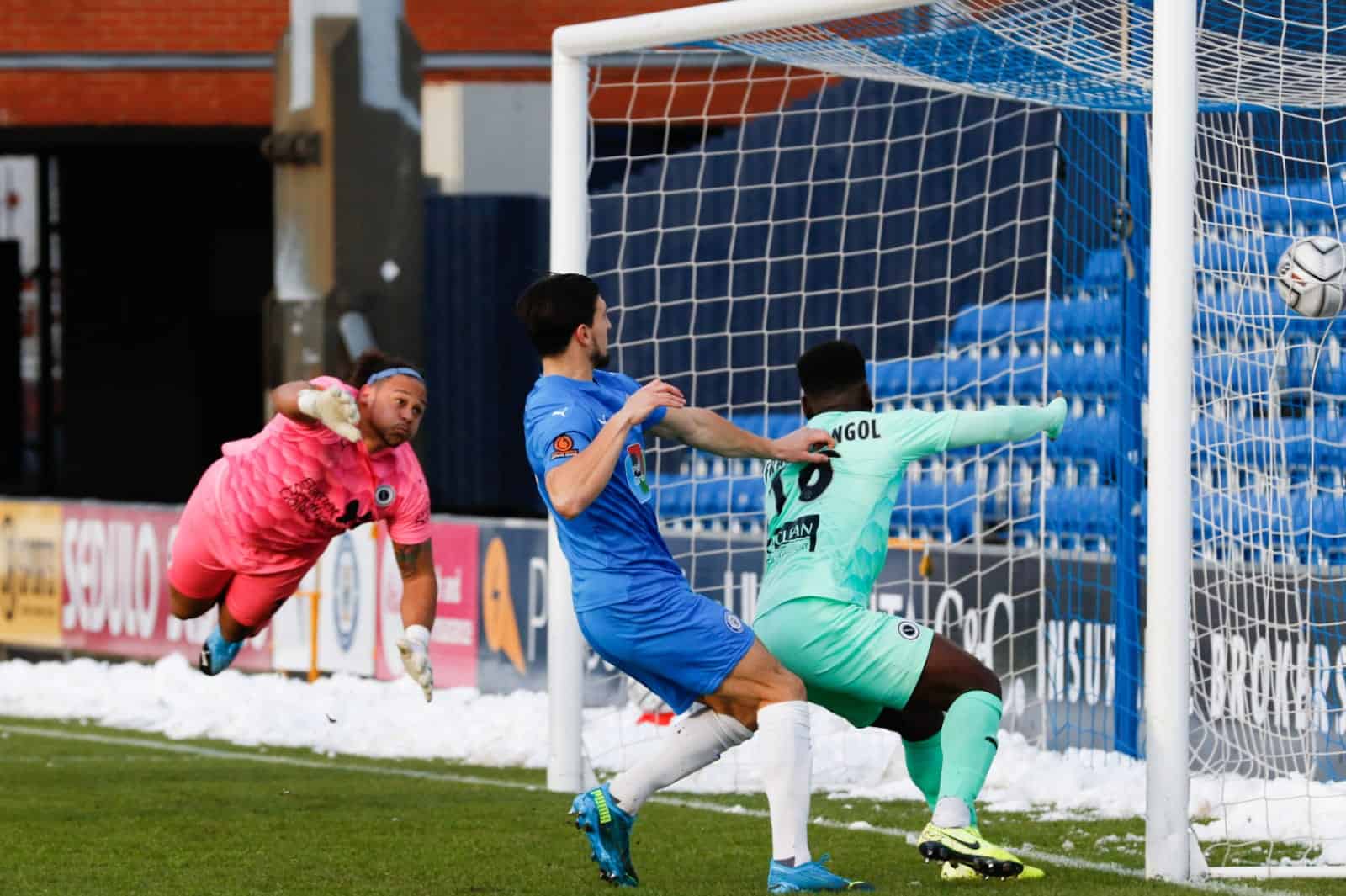 John Rooney put County ahead early on, before the visitors equalised close to the hour and Edgeley Park witnessed its second successive National League draw.

The EP pitch was cleared of morning snow in time for the game to go ahead, with acting boss Dave Conlon making three changes to the side that had started at Dagenham & Redbridge four nights earlier. Macauley Southam-Hales, Ash Palmer and Connor Jennings were the players recalled, in place of Sam Minihan, Jamie Stott and Ryan Croasdale – all of whom were named among the substitutes.

The afternoon’s first incident of note also yielded the first goal. when, with just over five minutes played, Alex Reid was fouled just to the left of the visitors’ area. Rooney then executed the resulting free-kick to perfection – curling the ball into the far top corner for his  far-from-unlucky 13th goal of the season in all competitions.

The ‘Wood’, who had deservedly and comprehensively achieved a ‘double’ over County in 2019/20, strove to get back on terms. Junior Morais intercepted a Ben Hinchliffe clearance, only to fire well wide of the left post. And Hinchliffe stood tall to block Kabongo Tshimanga at close range, as the striker attempted to convert a Morais cross from the left.

Morais was proving a real menace, and went close himself around the half’s mid-point when his shot from the right was tipped by Hinchliffe on to the near post and behind. And County’s Number One saved again from Tshimanga, who had cut in on the left following a break by the visitors just over 10 minutes before the break.

Chances had been at a premium for the Hatters since scoring, but in the closing stages of the half they fashioned two in quick succession. A fine run by Richie Bennett was denied a reward when Kane Smith blocked the eventual shot and deflected it beyond the right post. And, from the corner that followed – delivered by Mark Kitching – Reid’s glancing header grazed the crossbar.

County began the second half much as the first had ended for the hosts – in attacking mode. And an early attempt from Reid, who had cut in from the right, was blocked by goalkeeper Nathan Ashmore at the near post.

But with the hour approaching, the visitors drew level. Tshimanga, who had fired into the side-netting several minutes previously, made no mistake after being played in on the right as he blasted a well-struck shot past Hinchliffe.

Rooney drilled shots narrowly wide of either upright, and Reid saw an effort deflected over, as the Hatters sought to get their noses back in front – and The Wood forced the contest’s last three corners – before each side ended up quite fairly with a share of the spoils.

Man of the Match: Keane.