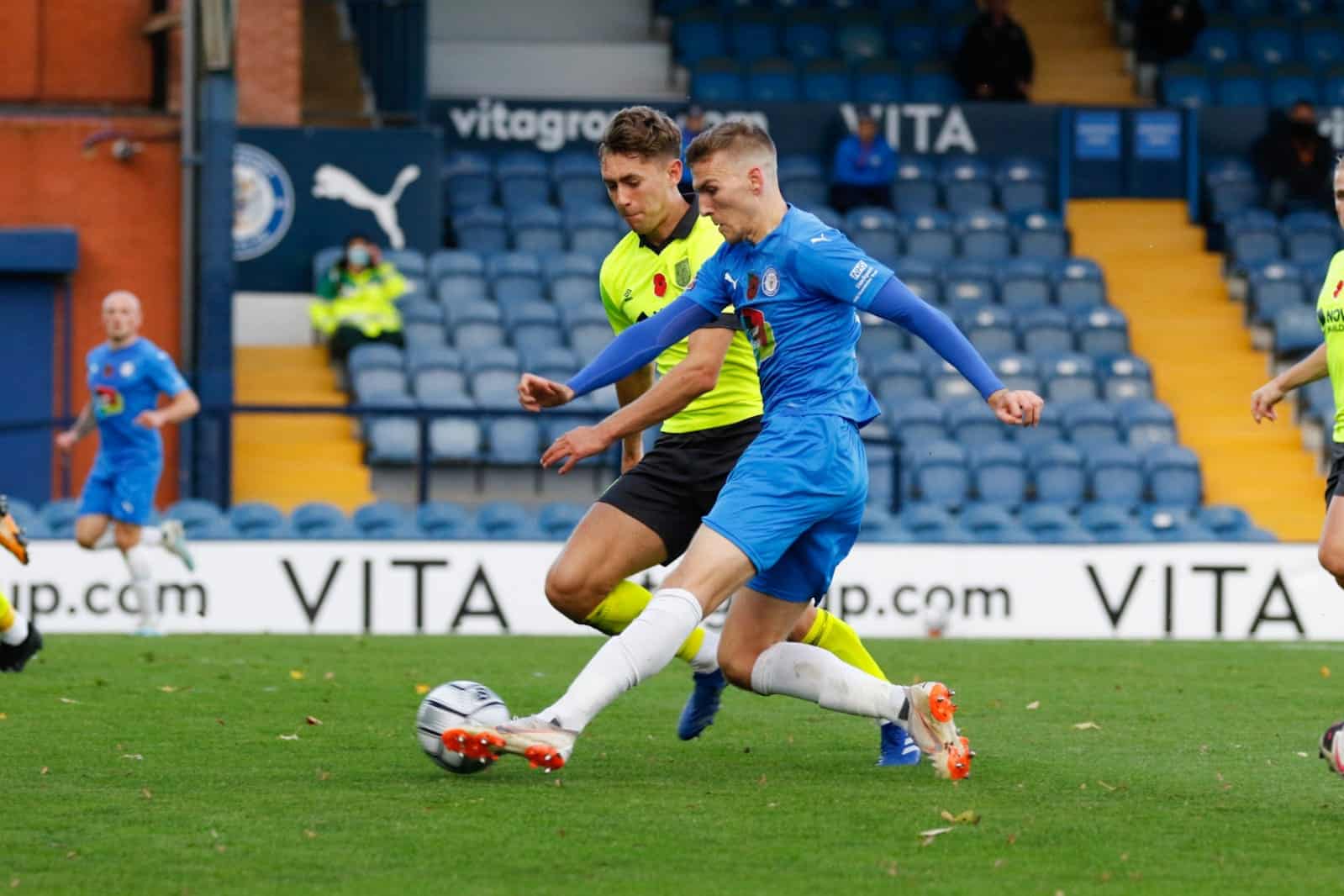 A third match at Edgeley Park within a week saw the Hatters suffer a first home defeat in the National League, with two second-half Weymouth goals securing the points, after Ash Palmer – making his 100th appearance – had given County an early lead.

Heavy morning wind and rain had given way to some unexpected Halloween afternoon sunshine, as County took to the field showing three changes from the side that had drawn with Solihull four days previously. Palmer had recovered from illness, and Mark Kitching and Lois Maynard from their respective injuries, to return to the starting line-up in place of Connor Jennings, Jordan Keane and Adam Thomas who were all named among the substitutes, along with newly-arrived Bristol City loanee Louis Britton. In addition to Palmer’s significant County appearances milestone, another was celebrated by Ben Hinchliffe – turning out between the sticks for the 200th time.

The Hatters fashioned a first chance of sorts with eight minutes played, after Richie Bennett headed on a Hinchliffe clearance to Sam Minihan on the right – but the wing-back fired well over from distance.

Half a dozen minutes later, County earned the first corner of the  afternoon – and promptly took the lead from it, as John Rooney’s delivery on the left was met by Palmer who headed home at close range for his side’s earliest goal of the campaign thus far.

Ryan Croasdale and Bennett both saw shots deflected beyond the right post prior to the half-hour mark – by which time injuries had forced Weymouth to make two substitutions rather sooner than they might have wished.

Kitching embarked upon one of his trademark runs down the left, before unleashing a low shot that visiting goalkeeper Jack Bycroft dived to smother. That was officially nine minutes before the interval – although it turned out to be 14, after the pair of earlier injury-breaks saw an unusually whopping five added on for first-half play.

For the first time since the season’s start, County resumed with a half-time lead – but the visiting ‘Terras’ were initially to enjoy a greater share of possession, and, within six minutes, drew  level after Calvin Brooks’ low shot took a deflection and skimmed past Hinchliffe into the bottom-left corner.

Another deflected Weymouth shot – on this occasion from Sean Shields – was well held by Hinchliffe, before Alex Reid at the other end fired over County’s inaugural second-half opportunity, following a Kitching cross on the left, just ahead of the hour.

Britton was introduced to pep up the attack with just over 20 minutes remaining, but neither that nor a follow-up double-substitution could help County’s cause. And with five minutes left on the clock, the Terras went ahead when Hinchliffe parried a shot from the left by Shields – but only as far as Tom Whelan, who headed in to secure victory.