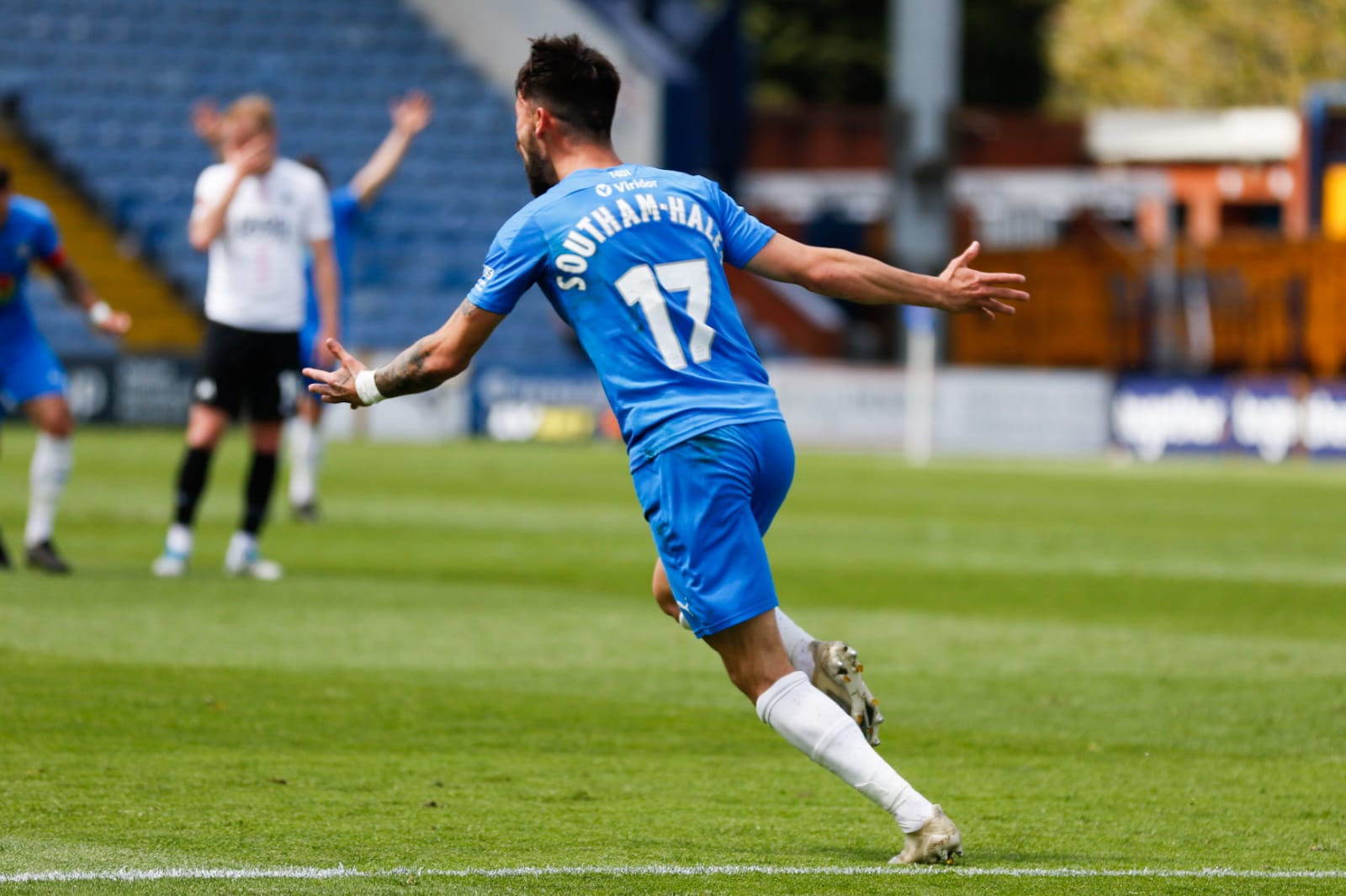 The Hatters edged back up to third place in the National League, after sharing the spoils with fellow promotion chasers Torquay at Edgeley Park in an entertaining contest played out in front of the television cameras.

In a predictably tight affair involving two sides at the business-end of the table with long unbeaten records, Macauley Southam-Hales’ first-half opener was promptly cancelled out by a Torquay penalty, before County came from behind following the break to salvage a point through Ash Palmer.

The result extended to 16 games the Hatters’ run without a defeat, and left the prospect of a top-three finish in their own hands – whilst also confirming mathematically that their chances of the title and automatic promotion were now over.

County took to the field in the spring sunshine for an early Sunday lunchtime kick-off to accommodate the live TV coverage, and showing two changes from the starting line-up in SK3 against Dagenham & Redbridge five days previously – with Tom Walker and Alex Reid replacing, respectively, Ryan Rydel and the injured Paddy Madden.

The Hatters earned the contest’s first corner in the second minute, and created its inaugural chance with five more on the clock – as Harry Cardwell latched on to a Southam-Hales cross from the right to head straight at visiting goalkeeper Lucas Covolan.

Covolan’s opposite number one Ben Hinchliffe was called into action shortly afterwards – stretching to parry away an effort from Jake Andrews. And the ‘Gulls’ then pressed again, when Mark Wynter’s chip from the right was volleyed narrowly over by Armani Little.

A delightful, quick-fire County move into Torquay’s box just ahead of the quarter-hour mark saw Reid go close with a low shot that Covolan did well to tip around the left upright – before the end-to-end fare continued further, courtesy of an attempt struck into Hinchliffe’s arms by Adam Randell.

At the half’s mid-point, Connor Lemonheigh-Evans, who had scored the only goal of the reverse fixture at Plainmoor on the season’s opening day, almost breached County’s defence again – only to be denied by the far post, following his chip from the left. And five minutes later, a shot by the same player stung the hands of Hinchliffe before the Hatters cleared their lines.

The Hatters had opening the scoring in their most recent match after 34 minutes – and they proceeded to do precisely that again, as Southam-Hales curled a stunning shot from the right into the far-top corner for his first competitive goal at EP.

Further drama followed in the immediate aftermath, with Torquay’s Assistant Manager Aaron Downes being shown a red card and required to leave the technical area.

But just as County’s lead on Tuesday night had been short-lived, so it was again – as, five minutes later, a foul by Ryan Croasdale on Lemonheigh-Evans just inside the left of the home area saw a penalty awarded to Torquay. Scott Boden stepped up to blast his spot-kick through the middle and send the sides in all-square at half-time.

The visitors had finished the opening 45 minutes strongly, but County matched them for attacking endeavour upon the resumption – and an Elliot Newby shot was deflected just beyond Torquay’s right post for the first corner following the interval.

But three minutes before the hour, and, with their initial second-half foray of note, the Gulls went ahead, after Lemonheigh-Evans’ through-ball was squared from the left by Andrews for Boden to net his second, off the crossbar and at close range.

Again, however, the lead was quickly pegged back – with Palmer rising at the far post to head in John Rooney’s corner from the left and draw the Hatters level.

Southam-Hales saw a shot deflected over by Joe Lewis, and Croasdale’s chip from the right was agonisingly shy of the far post, as County strove in vain to get back in front. And at the other end, Torquay spurned a chance when substitute Benji Kimpioka opted to square to the off-balance Lemonheigh-Evans when best placed to shoot.

As added time approached, Newby fired over from the left – before both defences held firm in the dying stages to preserve a point apiece.