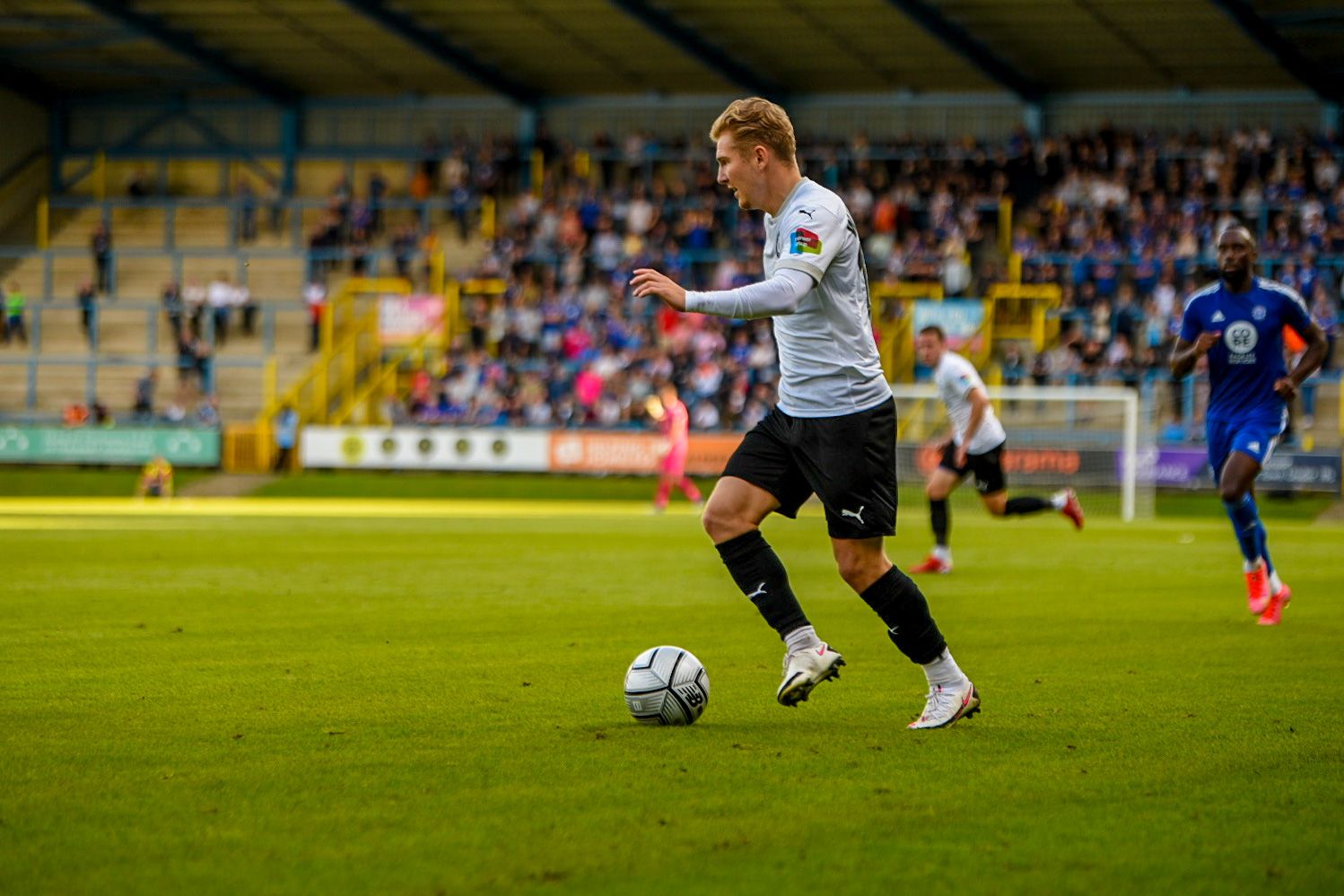 County made a relatively short trip across the Pennines to take on the ‘Shaymen’ of FC Halifax Town, but fell to a second successive three-goal Saturday defeat – as well as a first reverse on their travels in over six months.

One-time Edgeley Park favourite Matty Warburton came back to haunt the Hatters by converting a free-kick towards the end of a first half that they had largely dominated, before the hosts added a second 12 minutes from the end, and a third in time added on, to enjoy their 13-year-old phoenix club’s first-ever competitive triumph over County.

County took to the field in the mid-September sunshine with a line-up unchanged from that at Maidenhead four days earlier, whilst Ash Palmer returned from his one-match suspension to be named among the substitutes in place of Will Fish. Harvey Gilmour, as well as Warburton, started as half of an ex-Hatters’ contingent for the hosts.

Cheered on by a sizeable travelling following, County created the contest’s first chance around the quarter-hour mark – and it also went close to troubling the scorers, as John Rooney’s curling low drive through a crowded Halifax box struck the right post.

The Hatters proceeded to earn a couple of corners – the second of which fell to skipper Liam Hogan, who fired narrowly over – before the hosts’ woodwork was rattled again, on this occasion by their own captain, Niall Maher, whose sliding interception of an Alex Reid delivery from the left saw the ball glance the crossbar and earn County another corner.

Halifax had enjoyed precious little sight of the County goal until four minutes before half-time, when Warburton gave his new side the lead against the club he had helped to win promotion to the National League in 2019 – breaching, in the process, the Hatters’ defence away from home for the first time in nine games and some 13 hours.

A foul by Hogan just outside the ‘D’ gave the Shaymen their free-kick, and Warburton duly stepped up to deliver – courtesy of a low drive that fizzed past former team-mate Ben Hinchliffe and into the bottom-right corner of the net.

Having gone ahead against the run of play, the hosts made the immediate early running upon the resumption – with diminutive, but often deadly, leading scorer Billy Waters unleashing a low shot that Hinchliffe dived to smother.

County sought to respond through Macauley Southam-Hales, whose chip from the right was palmed around the near post by home goalkeeper Sam Johnson, before Johnson’s opposite Number One was called into action again – with Hinchliffe first having his hands stung by a shot from Jordan Slew, and then narrowing the angle to deny Waters.

A double-substitution just after the hour saw the Hatters bring on Tom Walker and Ben Whitfield, as they strove to get back on level terms. And shortly afterwards, Rooney went close with a thunderbolt from the edge of the area that Johnson did well to parry behind.

The game was opening up – and Halifax, as well as Warburton, almost doubled the advantage when the former County man’s shot was blocked just in front of the line by Southam-Hales with a little over 20 minutes remaining.

Then, with their next attack of note, the Shaymen actually did so. Good work down the left by substitute Jamie Allen led to a low cross that was bundled home at close range by Tom Bradbury. And Waters added the third, after being played through in added time, leaving County to return from Yorkshire empty-handed.