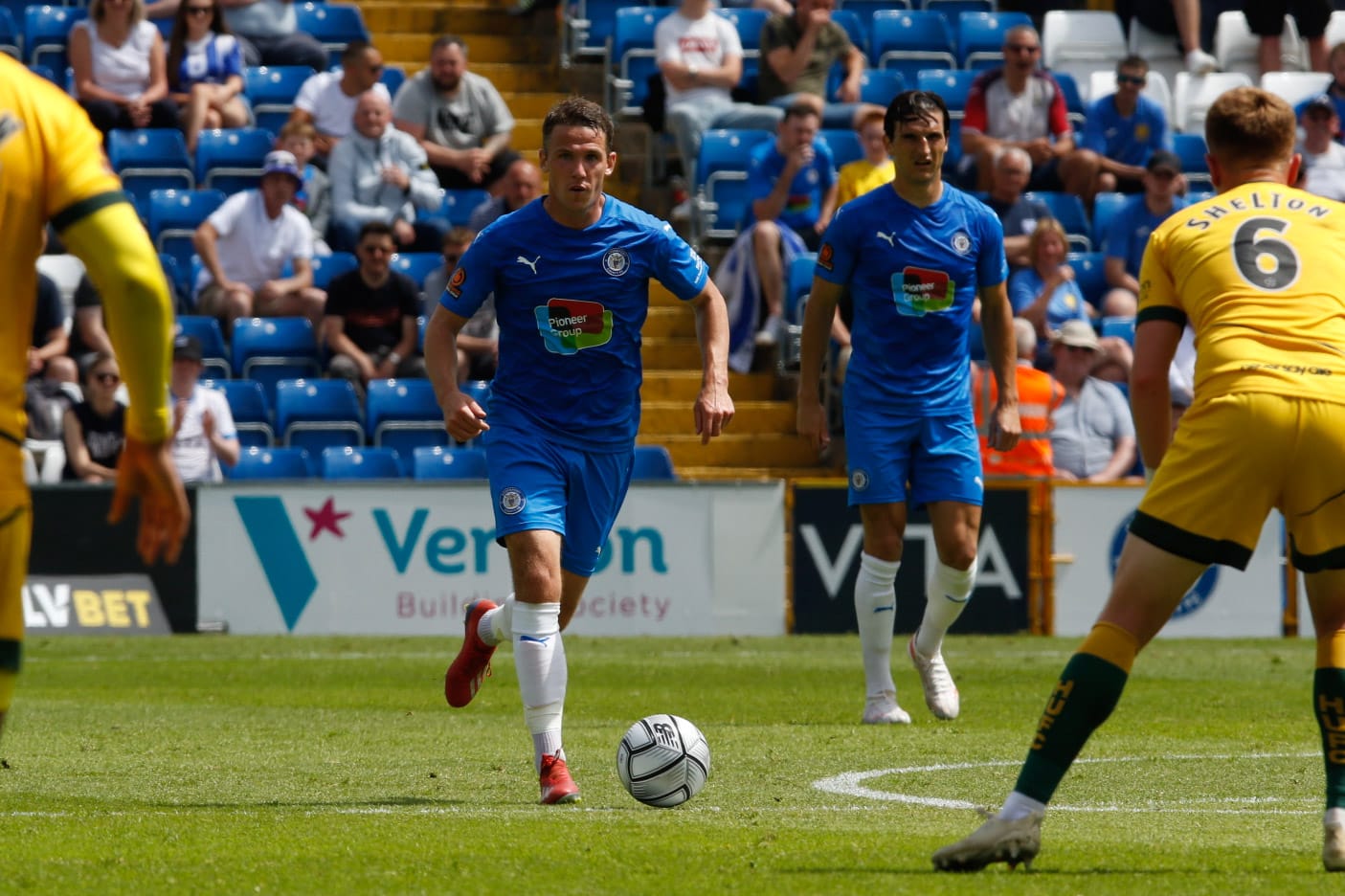 The Hatters’ first venture into non-league’s top-tier play-offs saw them edged out by a single goal against Hartlepool at Edgeley Park.

A socially-distanced crowd of over 2,700 saw County’s 18-match unbeaten run come to an end, courtesy of ex-Hatter Rhys Oates’ strike 15 minutes from time that consigned Simon Rusk’s side to a third successive season in the National League.

County took to the field for a first competitive match at EP in flaming June, showing two changes from the starting line-up at Yeovil just over a fortnight previously – with Will Collar and Paddy Madden both returning from injury in place of, respectively, Jordan Keane and Alex Reid.

The Hatters made a lively start – unleashing the first shot of the afternoon just two minutes after the midday kick-off in front of the television cameras, as James Jennings fired an attempt from the left that visiting goalkeeper Brad James caught cleanly.

Five minutes later, they went close again after Harry Cardwell’s through-ball to Macauley Southam-Hales resulted in a low cross from the right that Madden skewed beyond the far post. But as the game settled down, the two former Football League rivals, who had finished a single point apart at the end of the campaign-proper, proceeded to cancel each other out for a long spell.

Midway through the first half, the match ball lodged itself in the gutter of the Pop Side roof – just a yard or two away from the last one to have met that fate – also, as coincidence would have it, against ‘Pools during the regular season late in March.

Eight minutes before the break, leading Pools scorer Oates produced his side’s first effort of note – but dragged his shot wide of the right post. And shortly afterwards, the striker cleared the goal again when he fired over from distance.

The visitors made much of the early second-half running, as Jamie Sterry’s looping crosses from the right kept Ben Hinchliffe on his toes – and had a penalty appeal waved away, when Mark Shelton went to ground in the County box following a Liam Hogan tackle.

Hinchliffe’s opposite number, James, was then forced into action to block John Rooney’s snapshot, after the National League Player of the Year had been teed up from the right by-line by Southam-Hales.

Elliot Newby was introduced for Collar on the hour – and an eventful few minutes for him followed as he was first caught in the face by Gavan Holohan’s high boot, before being set up by Tom Walker from the left to poke a deflected shot just wide of the near upright.

With a quarter of an hour of normal time left on the clock, Oates broke the deadlock, and the Hatters’ hearts, after picking up the ball on the edge of the area and firing it past Hinchliffe into the bottom-right corner.

As the 90-minute mark approached, County looked for all the world to be sending the game into extra time as substitute, and one-time Pools loanee, Richie Bennett connected with a Jennings cross from the left – only to see his header brilliantly kept out by James.

Man of the Match: Hogan.