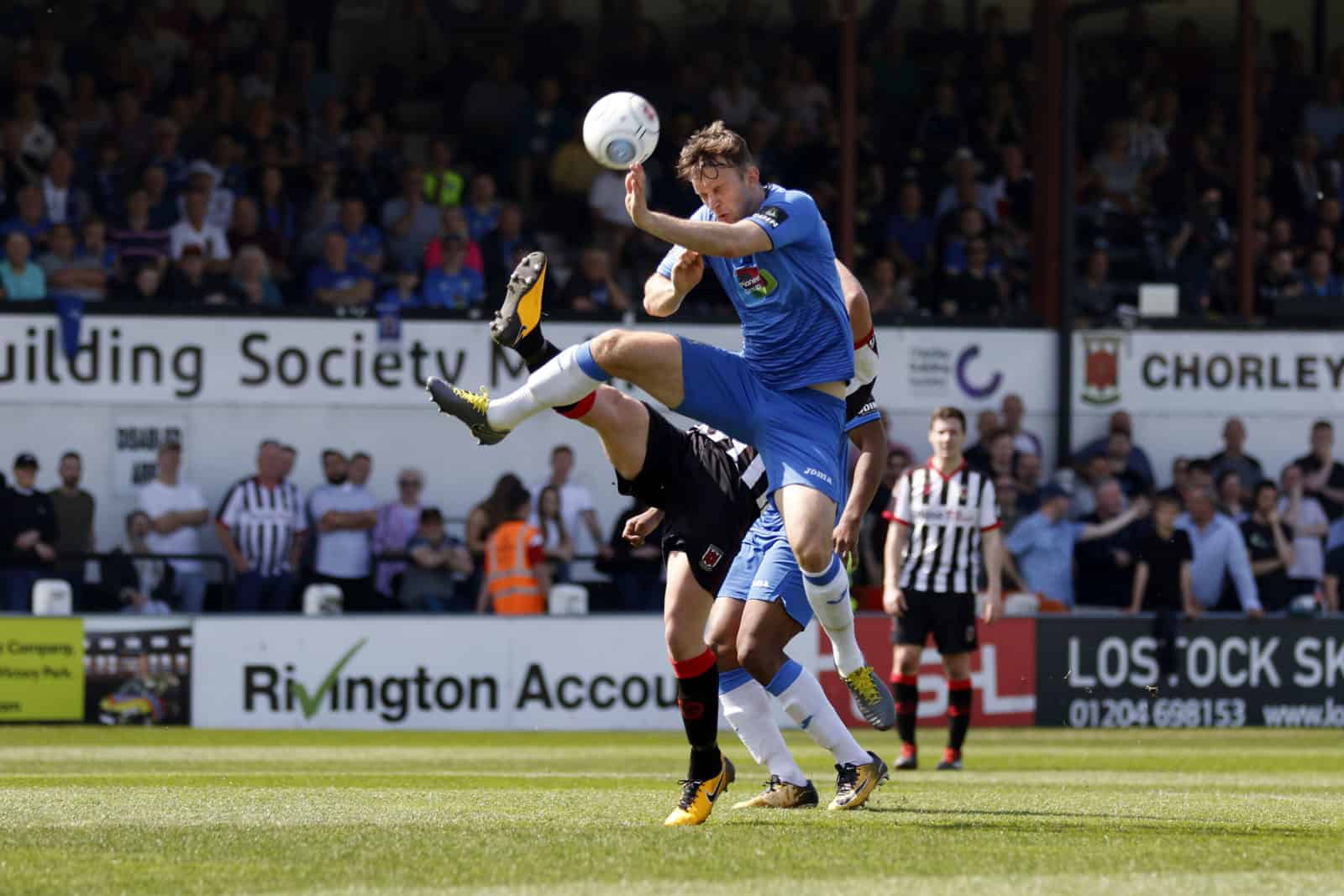 One (In Each Half) For Sorrow, As Magpies Steal Back Top Spot

A goal on the quarter-hour and another on the hour at a sold-out Victory Park saw the ‘Magpies’ of Chorley leapfrog County to reclaim first place, and go two points above the Hatters with two matches of the regular season remaining.

On a sunny Easter Saturday afternoon that marked six years to the day since County dropped into the National League North, there was to be no exorcising of anniversary demons for the Hatters – who, going into the next game, will not have it in their own hands to secure automatic promotion.

County took to the field for a fixture brought forward two hours to 1pm, showing two changes from the starting line-up in SK3 against Blyth Spartans the previous Saturday. Sam Minihan and Matty Warburton were recalled within a 4-2-3-1 formation to replace Sam Walker and the injured Dan Cowan – while Jake Kirby was included with Walker on the bench, following his recovery from an injury sustained at Brackley Town six weeks earlier.

The Hatters began brightly enough – with two early corners sandwiching a couple of free-kicks into the Chorley box from captain Paul Turnbull that were, respectively, blasted over by former Magpie Darren Stephenson and headed wide of the right post by Nyal Bell.

But shortly after County’s second corner, with 14 minutes played, the hosts earned a first of their own – following a build-up that, at one stage, saw Turnbull inadvertently blocked by Referee Scott Jackson. And from Alex Newby’s delivery on the left, Chorley took the lead as skipper Andy Teague’s downward header powered into the bottom-near corner of the net.

The Magpies proceeded to fashion the greater share of remaining first-half chances: twin brothers Alex and Elliot Newby both fired efforts over from the edge of the box; Matt Challoner prodded narrowly wide of the near upright, after latching on to Adam Blakeman’s long throw from the left; and Josh Wilson cut in from the left before releasing a shot that was smothered by Ben Hinchliffe.

The Hatters replaced Minihan with Walker upon the resumption – and, within two minutes, could and should have got themselves back on level terms. Stephenson beat ex-Hatter Courtney Meppen-Walter for pace on the left, before advancing to the by-line and squaring to the on-rushing Warburton – but, with the goal at his mercy, the top scorer skied over from close range.

A minute later, Ash Palmer connected with Walker’s corner from the right to glance a header wide of the far upright, although the hosts, as they had done in the first half, continued to enjoy more opportunities in front of goal – with Wilson blasting a shot over, Alex Newby, from Blakeman’s free-kick, heading at Hinchliffe, and Challoner’s low cross from the right fizzing across the goalmouth before Turnbull cleared the danger.

And with an hour on the clock, they doubled their advantage – as leading goal-getter Marcus Carver charged down an attempted clearance by Palmer on the left, before racing into the box and firing past Hinchliffe.

County’s Number One dived to gather Elliot Newby’s shot from a Carver nod-down – before County strove to reduce the arrears through substitutes Frank Mulhern, whose dipping volley from outside the area narrowly cleared Chorley’s crossbar, and Kirby, who saw his low shot deflected beyond the right post by Teague.

But it was, alas, to no avail, as the Hatters, for the first time all season, lost a second successive league game without scoring – sequences they will need to reverse at EP against near-neighbouring Curzon Ashton 48 hours following the final whistle in Lancashire.