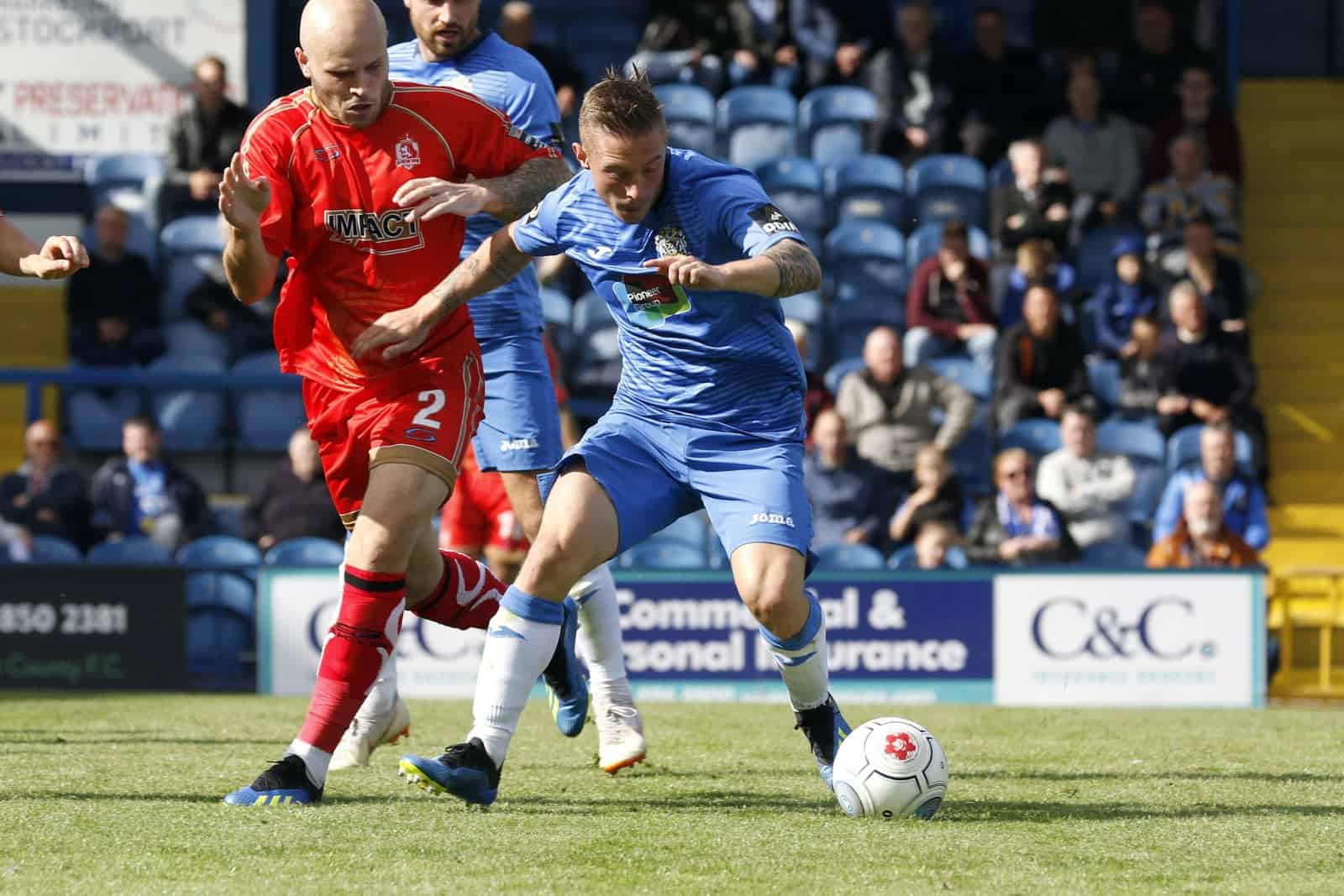 Early Strike By Tom Leaves A Dent On Home Record

County suffered a first home reverse in a regular league match for over five months, and a first-ever defeat at Edgeley Park by Alfreton Town – who, in claiming three points, also leapfrogged the Hatters into the final play-off position.

The outcome of a fixture which, on three of the four previous occasions, had been settled by a single goal in County’s favour was again determined with one decisive attempt – but this time courtesy of leading Alfreton scorer Tom Denton, who headed home after just eight minutes. 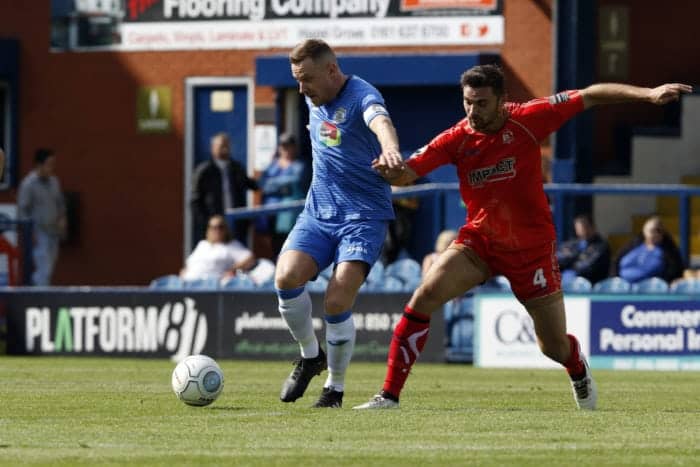 The Hatters took to the field in a 4-3-3 formation, and showing two changes from the initial line-up at Bradford (Park Avenue) a week previously. Ash Palmer returned from injury, while Nyal Bell was handed his first start, as Connor Dimaio and Jake Kirby dropped back to the bench.

The only goal of the contest came from Alfreton’s first attack, which had seen Bobby Johnson head out to Josh Wilde on the left. Wilde, one of several Halifax players to follow manager Billy Heath to Derbyshire during the close season, then delivered a pinpoint-perfect cross for fellow former Shayman, and one-time County target, Denton to nod in at the far post.

County sought immediately to get back on level terms, and, four minutes later, had the ball in Alfreton’s net, as Sam Walker tapped home following good work on the right by Sam Minihan – only for the former Sam to be adjudged offside. 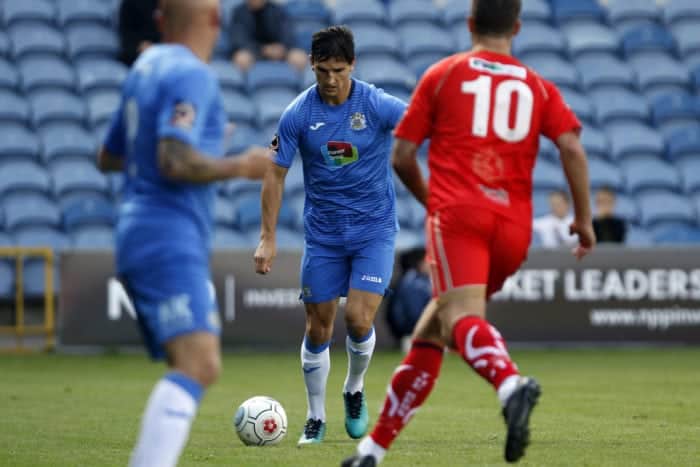 The Hatters proceeded to enjoy much of the remaining first-half possession, without displaying a cutting edge – although visiting goalkeeper Sam Ramsbottom did well to parry a free-kick by Matty Warburton, and deflected a Josh Askew effort from the left into the near side-netting.

Frank Mulhern – playing for the second time in seven days against a club with which he had been on loan last term – also went close, by way of a shot that, 10 minutes before the break, took a deflection to fizz narrowly wide of the right post.

After the break, the ‘Reds’ twice came close to extending the lead – with Johnson’s 25-yard free-kick rattling the crossbar, and Richard Peniket heading on a corner that Ben Hinchliffe kept out. 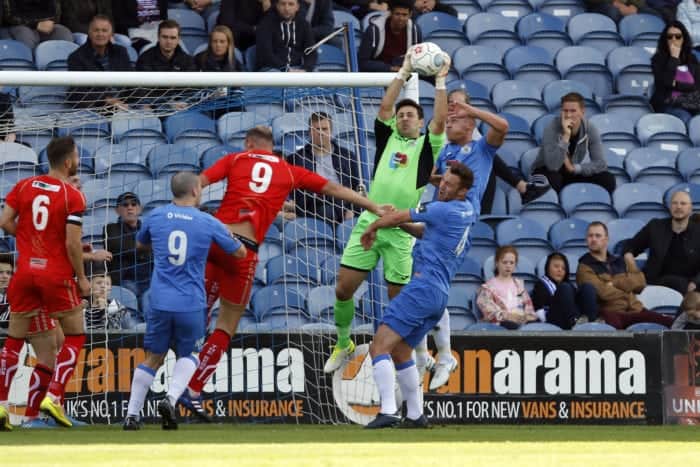 They then, like County earlier, had an effort disallowed for offside, when Denton was flagged after an excellent run and low shot from James Clifton looked to have made it two just past the hour.

The Hatters spent the latter part of the second half as they had done after falling behind in the first – applying some pressure, but ultimately in vain as the Reds’ defence, now five-strong, as opposed to a mere back four, held firm. County’s best chance fell to Bell – another of Alfreton’s loanees in the previous season – who fired narrowly wide when one on one with Ramsbottom. 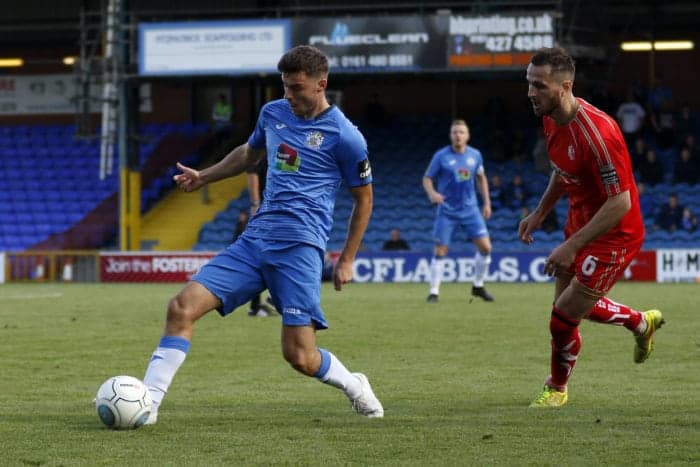 Alfreton will have been relieved to end a four-match sequence of alternate defeats and victories with a second successive win, while the Hatters also broke a run of two one-all draws – albeit not in the way they had wished.