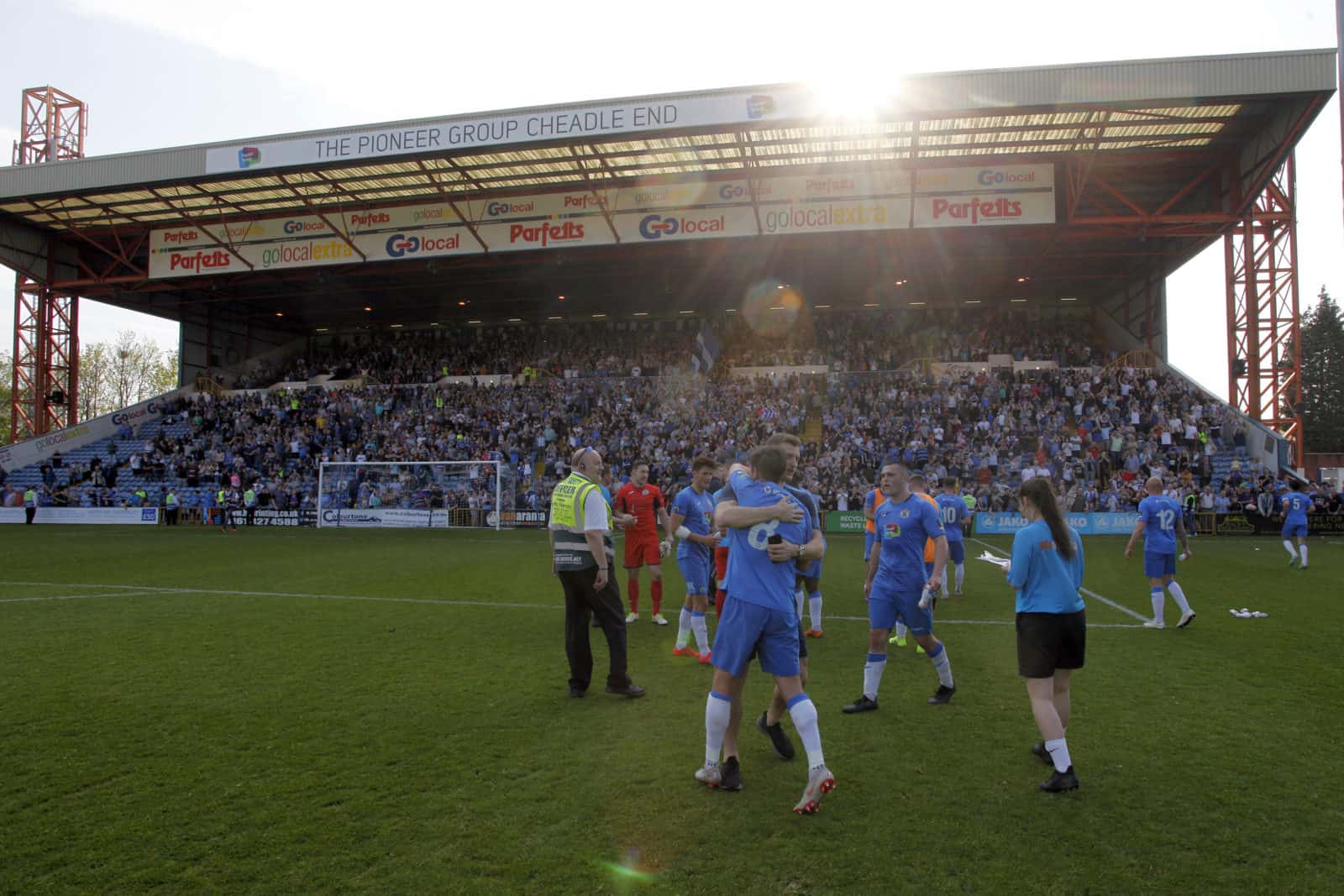 The despair of Easter Saturday’s defeat at Chorley was transformed to joy and hope in a little over 48 hours, as a two-goal County home victory over near-neighbours Curzon Ashton, coupled with a dramatic, late slip-up by the table-topping ‘Magpies’, lifted the Hatters back up to pole position.

A pair of first-half goals from Ash Palmer and Matty Warburton settled matters in the course of a relatively routine win at Edgeley Park. But euphoria among most of the 6,000 (+1!) in attendance truly broke out late on by way of reaction to events over 130 miles away in County Durham.

For there, at the Brewery Field, Spennymoor Town first defied Chorley by virtue of Matt Gould’s penalty save 10 minutes from the end – and then stunned the leaders with a Glen Taylor goal deep into added time, meaning that a triumph five days hence at Nuneaton Borough would guarantee automatic promotion for the Hatters, irrespective of results elsewhere.

County took to the field for the campaign’s final regular match in SK3 showing four changes from the starting line-up of two days earlier. Elliot Osborne, Sam Walker, Frank Mulhern and Jake Kirby were selected as part of a 4-4-2 ‘diamond’ formation – replacing Sam Minihan, Jordan Keane and Darren Stephenson (all of whom were named among the substitutes), as well as Nyal Bell.

While the ‘Nash’ created a first-minute half-chance that saw John McAtee’s shot hit the left side-netting, the Hatters won an early corner immediately following that – and, within another five minutes, they earned a second which led to the afternoon’s opening goal.

Captain Paul Turnbull’s delivery from the left found Ash Palmer beyond the far post, from where the central defender blasted a volley into the roof of the net for his fourth goal of the season.

Kirby unleashed a low drive narrowly wide of the left post, before the visitors began to exert some pressure of their own. Turnbull’s attempted clearance against Cameron McJannet saw the loanee defender go close with a ricochet that fizzed past the right post – and Ben Hinchliffe was forced to tip over a long kick from his opposite number one Cam Mason.

But the Hatters struck the next – and, as it turned out, decisive – blow, courtesy of their leading scorer’s 26th goal for the campaign, and, in wonderful synchronicity, with 26 minutes played. Matty Warburton, who had last netted for County 14 first-team matches earlier, began the move by releasing Kirby on the right, before advancing to meet the latter’s subsequent cross with a first-time shot from close range against his former club.

County continued to press for the remainder of the half – with Palmer seeing his shot from another corner blocked, Adam Thomas firing successive efforts high and wide, Osborne drilling narrowly off target, and Mason’s legs keeping out a well-struck Turnbull drive from outside the area.

The Hatters began the second half much as they had ended the first – and forced three corners within as many minutes, before striking the woodwork when Scott Duxbury’s delivery from the left hit the top of Curzon’s crossbar en route into the Cheadle End.

Stephenson was introduced just after the hour-mark, and, within five minutes of entering the fray, had a golden opportunity to extend County’s advantage – but the substitute tapped shy of the near post after Mulhern had teed him up from the right.

Mulhern was then thwarted twice by Mason, who claimed Stephenson’s low cross ahead of the striker, before parrying a shot that Mulhern had unleashed following a one-two with Osborne.

Jamie Stott, playing the final game of his third spell on loan from Oldham Athletic, came close to signing off with a goal – as he had done at the end of his second, three months earlier – only to head high and wide Walker’s deep corner from the right with three minutes remaining.

But by then, the three points – along with an eighth league ‘double’ of the season – had been secured. And, as news filtered through from Spennymoor, the closing stages were played out in a frisson of mass excitement – with the Hatters ending the afternoon a point clear at the top, as well as approaching the next weekend in the knowledge that their fate would once more be in their own hands.

Man of the Match: Mulhern.