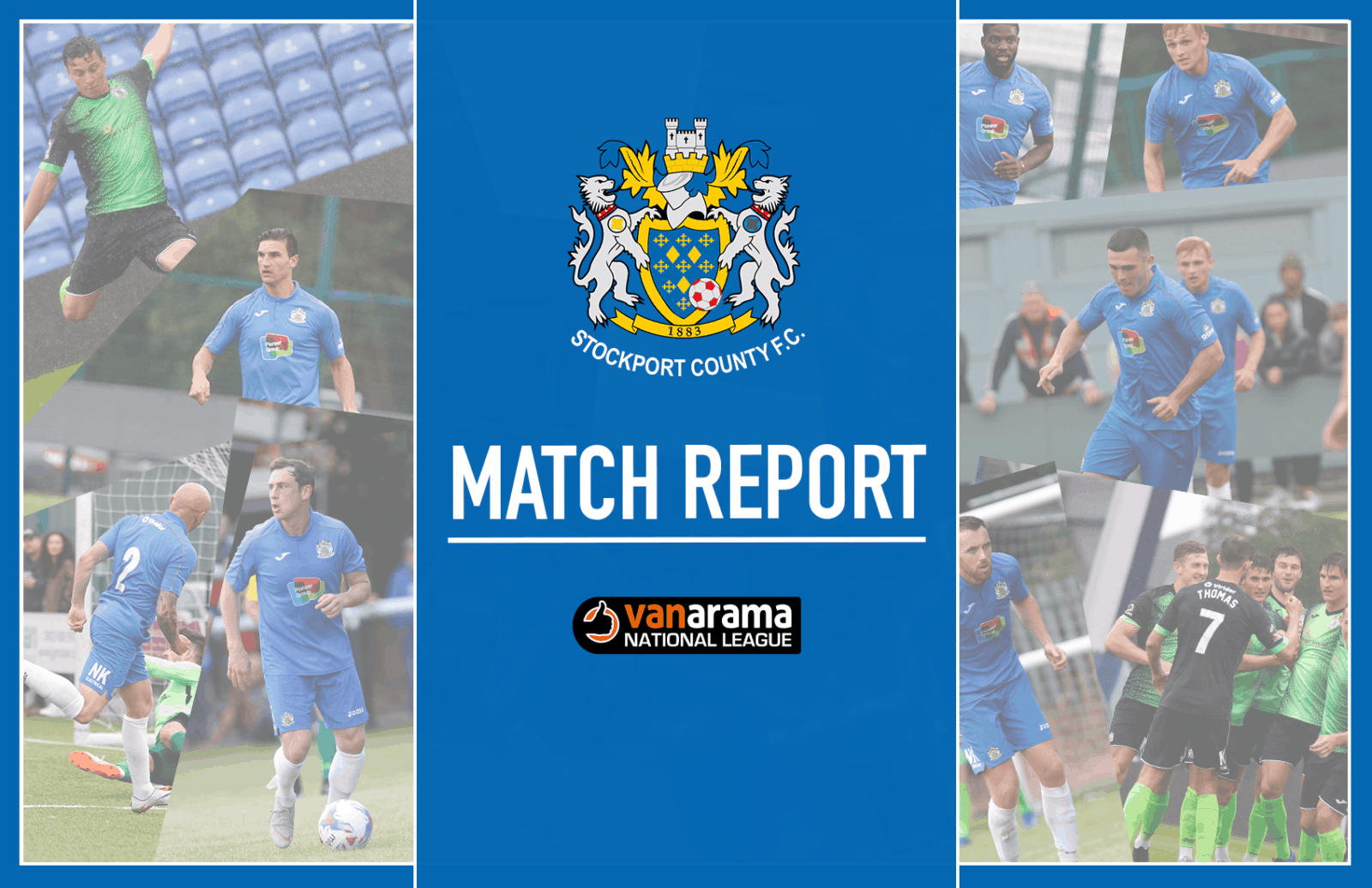 Tricky Run On The RoaD-over – And Frank’s Strike Is A Bit Of All White!

The Hatters’ first-ever contest with the ‘Whites’ of Dover Athletic, and their longest scheduled away-trip of the season, saw them enjoy a deserved single-goal win at The Crabble that brought to an end a winless sequence of six matches on their travels in all competitions.

The decisive wonder-strike of the afternoon – by Frank Mulhern from distance, after 30 minutes – also became an instant contender for County’s goal of the season, against injury-ravaged hosts who finished the match with 10 men with no substitutes remaining to use.

County took to the field as some rain began to fall, and showing three changes from the line-up that had started at York City in the unfortunately short-lived FA Cup adventure a week previously. Left-back Tyler Garratt was handed his competitive debut, while, further upfield, Adam Thomas and Mulhern were recalled – replacing Nyal Bell and Jordan Keane (both of whom were named among the substitutes) and the suspended Joe Leesley.

The Hatters looked the more dangerous side going forward in the early stages – and created the contest’s first chance of note after seven minutes after Mulhern played back a Thomas cross from the right to Sam Minihan, whose low shot was smothered by home goalkeeper Yusuf Mersin.

The hosts, for their part, went close half a dozen minutes later, after Jack Munns’ corner from the right was half-volleyed shy of the near post by captain Kevin Lokko – whose participation was brought to a premature end by an injury shortly afterwards.

County’s skipper Paul Turnbull also sent a half-volley just wide, and from the edge of the box, in the wake of a corner at the other end – before Thomas saw a shot blocked, following good work by Tom Walker on the left.

The Hatters were twice without a player’s services in quick succession, as first Devante Rodney and then Thomas had to leave the field to have bloodied injuries patched up.

But in the course of Thomas’ absence, County took the lead in the most inspired of manners when Mulhern, on the half-hour mark and 45 yards away from goal, spotted Mersin off his line before teeing himself up to volley over the 6’ 5” Turkish ‘keeper and into an empty net.

The Hatters’ wall stood up to a dangerous free-kick from Bobby-Joe Taylor – deflecting the dead-ball specialist’s delivery over the crossbar – before Mersin stood tall to block Tom Walker’s shot with his legs, and Sam Walker struck the base of the left post from just inside the area.

Three minutes of added time, following a second enforced substitution of an injured Dover player, created little incident, save for an effort from stand-in skipper Inih Effiong that flew well over.

The hosts showed an early declaration of attacking intent two minutes after the break, when a clever chip from substitute Anthony Jeffrey was headed by Effiong into the arms of a relieved Ben Hinchliffe – who, 10 minutes later, did well to punch behind another Taylor free-kick.

County responded by earning a couple of corners within as many minutes – and from the second of those, Festus Arthur headed goal-wards, only to see his effort cleanly caught by Mersin.

The end-to-end fare of the second half continued – with Kurtis Cumberbatch threading the ball through to Jai Reason, who fired narrowly over for the Whites, before Sam Walker drilled another of his trademark low drives just beyond the right post, and substitute Elliot Osborne, during a lively cameo, was denied by Mersin when through on goal.

An injury to Will De Havilland 10 minutes from time saw the hosts’ ranks reduced, with three replacements already on the pitch. But, try as they might, the Hatters could not extend their advantage, as Mersin kept out an effort by Bell and parried behind the follow-up from Tom Walker, before Taylor, following the consequential corner, cleared a Bell header off the line.