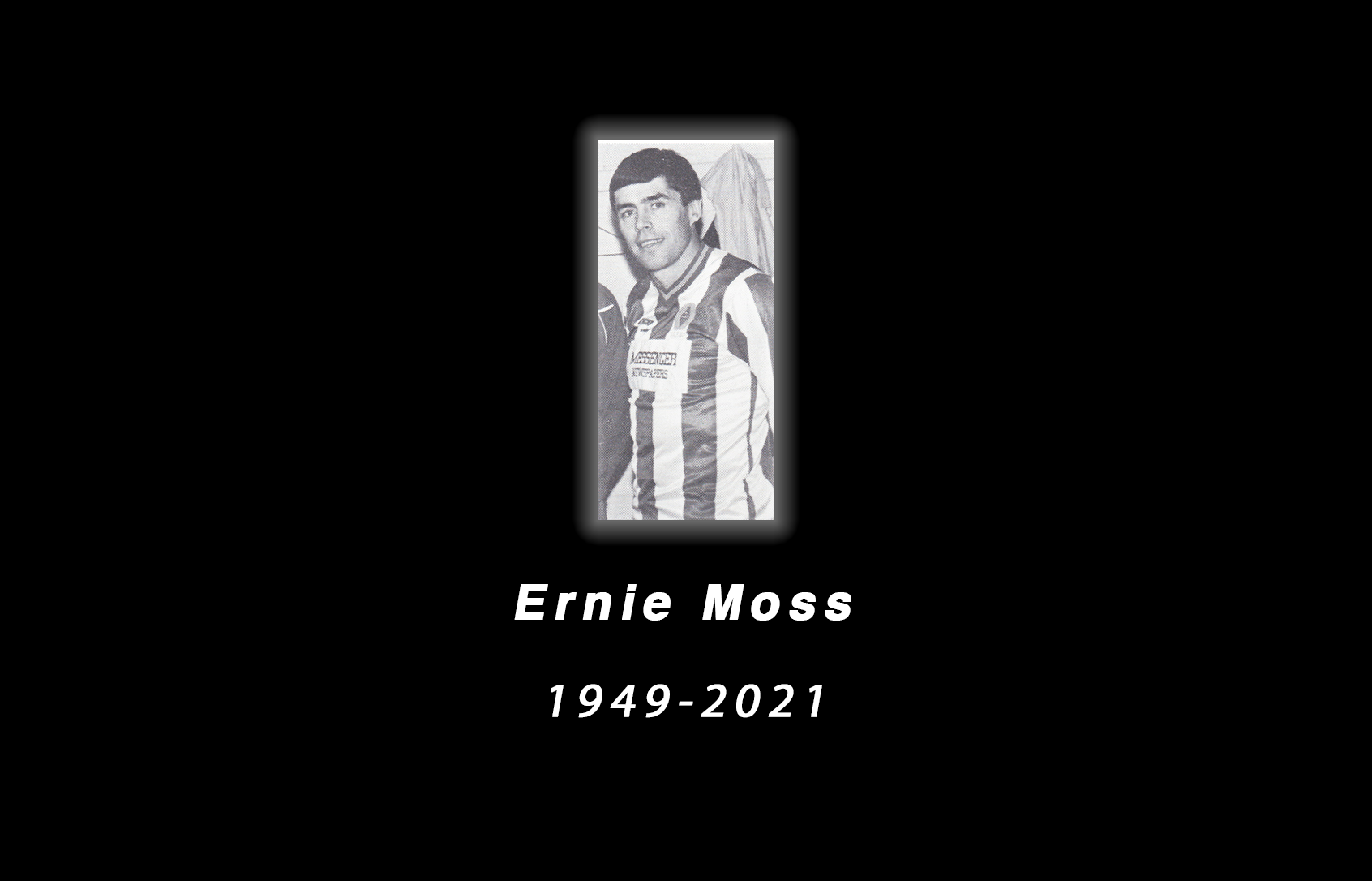 Everyone at Edgeley Park are saddened to hear of the passing of our former centre forward Ernie Moss (SCAN 919), who has died at the age of 71. He spent only half a season at Edgeley Park, but the impact he had is one we should all be extremely grateful for and is fondly remembered by County fans who witnessed his contribution.

He was a native of Chesterfield and is a legend at his local club, where he scored a club record 192 goals. During his long career he remained a sought after centre forward who was guaranteed to deliver goals wherever he played.

He joined the Spireites as an amateur in 1967, making his first team debut in October 1968. His goals helped him win a 4th Division championship medal in 1970. He made 271 league appearance in his first spell at Saltergate, before moving to Peterborough and Mansfield where he continued to score regularly. During his time at Field Mill, he helped Mansfield reach the second tier of English football for the only time in their history. He returned to Chesterfield for a second spell before moving to Port Vale and then Doncaster (where he celebrated another promotion from the 4th Division). His third and final spell at Chesterfield saw him secure his second 4th Division championship medal in 1985.

It was seen as somewhat of a surprise when newly appointed County manager Colin Murphy was able to secure the signing of Moss (and Phil Brown) for a fee of £8,000 in December 1986. With County languishing at the very bottom of the 4th Division (in what was the first season with automatic relegation to the Conference), the club was in a desperately perilous position. Murphy reached out to Moss (who he had previously managed at Lincoln) looking for him to help The Hatters move up the table. His signing was inspired, with Moss (who was 38 when he came to Edgeley Park) having a significant impact on the team, scoring 6 goals that had a huge bearing on County finishing outside the bottom four. Four of his goals were winning goals that delivered the crucial points that helped County move up the table, where they finished a remarkable 19th in the table. His first County goal was scored at Edgeley Park on News Year Day 1987 when he scored the winning goal versus Crewe.

Whilst he had a reputation for having a strong aerial threat, County fans were surprised to watch his skills on the ball. He scored two particularly memorable goals – an overhead kick that secured a win at Hereford, as well as a spectacular volleyed winner versus Scunthorpe at Edgeley Park. This latter goal, celebrated by his trade mark arm raised celebration, being judged the Goal of the Season by the County fans.

He left Edgeley Park during the following close season where he moved to new Football League team Scarborough, for a fee of £4,000. County fans may reflect that the net £4,000 County paid for Moss might be the best ever in the Club’s history, for one can only ponder as to whether County would have been able to come back from an exit from the Football League at this time.  It was only four seasons later that County were to be promoted from the 4th Division under Danny Bergara.

Moss was to finish his long League playing career at Rochdale before playing and managing at non-League level for a number of years.

In recent times he had fought a long and brave fight with dementia, surrounded by his close family who have provided amazing support. Remembered as one of the best lower division centre forwards, he was also known as one of the nice guys in football. Fondly remembered wherever he played, and we celebrate him for the short but significant role he played in one of our most important seasons. We send our deepest condolences to his family and friends at this difficult time.