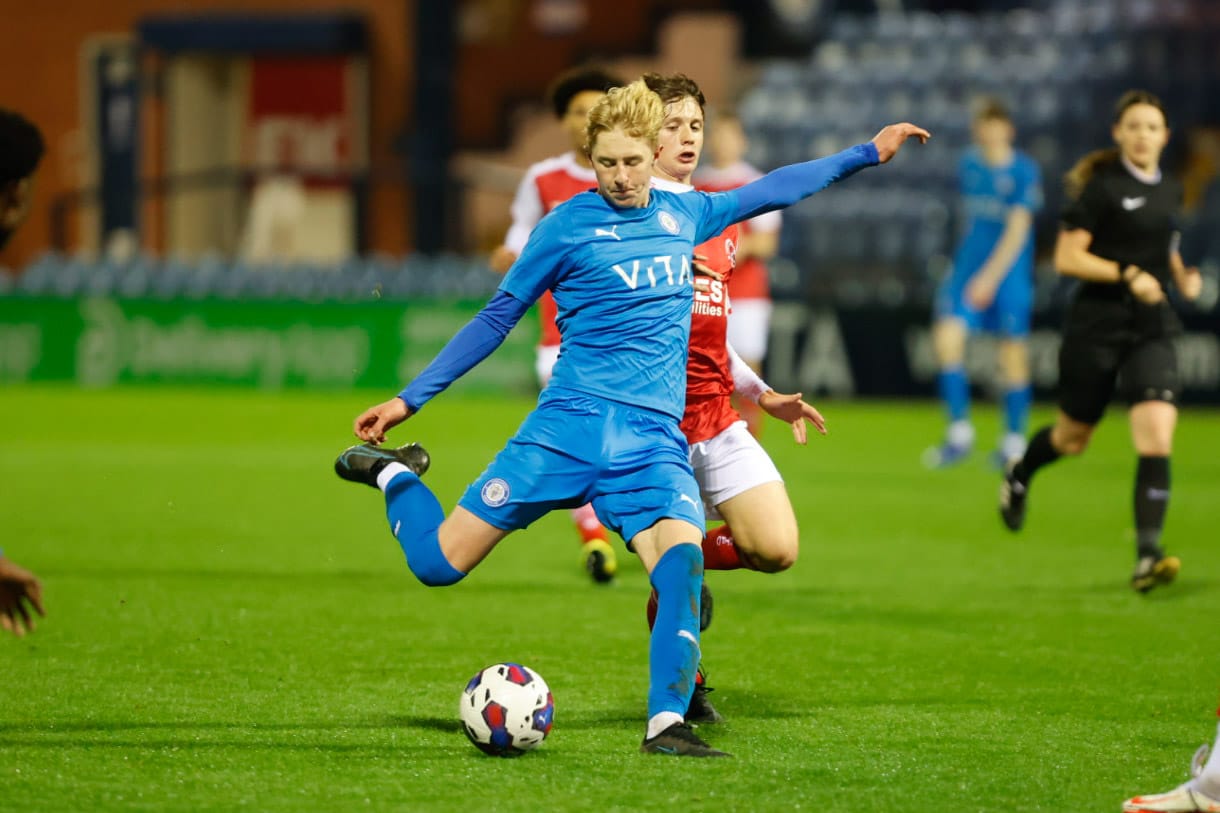 County were knocked out of the FA Youth Cup on Tuesday night, as Fleetwood Town won 1-0 at Edgeley Park.

After an even start, County emerged with the first chance of the game. Jack Jones linked up with Dallas Omoruyi down the left, but the left-back’s side-footed effort was just wide of the target.

Tom O’Brien was mere inches away from handing County a deserved lead. Cody Johnson floated a free kick to the back post where O’Brien was waiting, but his header bounced off the post and was cleared away from danger. In the same phase of play, Keane Barugh tried his luck from outside the box, but his venomous strike was straight at Stephen McMullan.

Fleetwood grew into the half and could have taken the lead. Billy Jones flicked a corner on at the near post, and the ball evaded two red shirts on the way across goal.

County had a penalty saved half an hour into the game. Fabio Kibonda was bundled to the ground as he raced through on goal, but Johnson’s penalty was saved down to the left of McMullan’s goal.

Another great chance came and went for County. Omoruyi played a wonderfully weighted pass through to Johnson, and McMullan made a miraculous low save to divert the ball past the post. From the resulting corner, Omoruyi glanced a header towards goal, but McMullan once again did just enough to keep the ball out.

The visitors tried to make something happen on the stroke of half time. Sam Glenfield picked the ball up and drove forwards, but his low strike was wide of the target.

Fleetwood came out the stronger of the two sides in the second half and could have taken the lead straight from the off. Pharell Brown dinked the ball over Billy Blake, but it trickled wide for a goal kick.

The visitors ramped up the pressure and would soon be wondering how they didn’t take the lead. Mikey Lane connected with a cross and hit the upright from close range, and on the follow up Zane Marsh had his effort cleared off the line by Jack Kenny, before the resulting chance was scooped over the bar.

County were made to pay for their slow start midway through the half. Will Johnson ran from deep with the ball, took time to set himself and picked out the bottom corner with a curling effort, giving Blake no chance.

Omoruyi could have brought County level with a great chance. The ball was lifted over the top and the forward found himself one-on-one with McMullan, but the goalkeeper denied him with an excellent save.

As the half ticked on, County threw everything they had at the Fleetwood goal. Johnson whipped a free kick into the box and Omoruyi rose well but couldn’t direct his header goalward, as the ball sailed over for a goal kick.