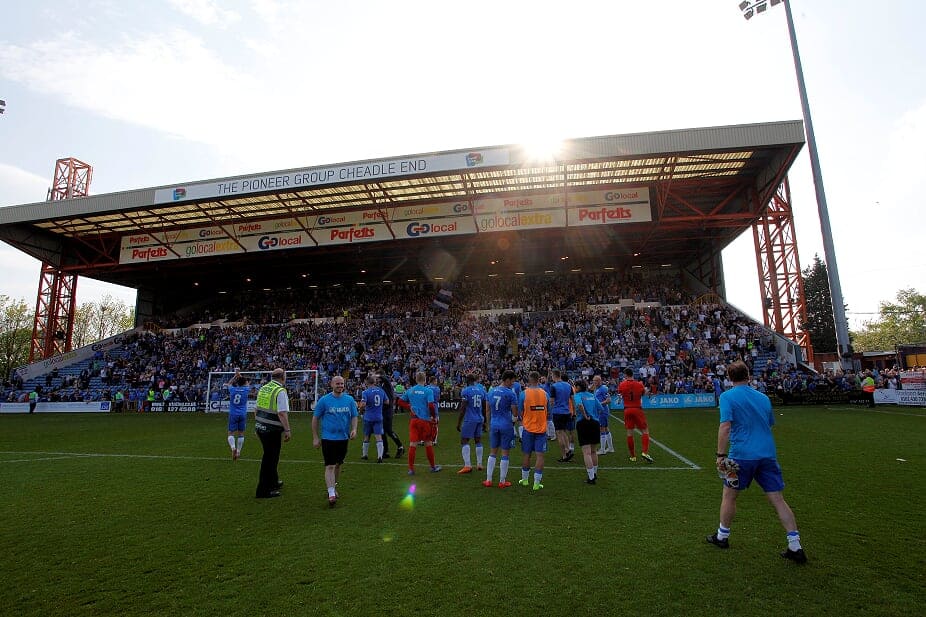 Another sensational crowd of 6,001, our second highest league gate of the season, were present yesterday at Edgeley Park for another thrilling, tense and dramatic day in the title-race, that saw the Hatters move top of the league going in to the final day of the season.

In addition to this, however, the bumper crowd also saw our total home attendances for the season smash the 100,000 mark – 100,919 to be precise – our highest such figure since our days in the Football League!

County Director Jon Keighren said: “There is no doubt that the tremendous and phenomenal support of the Blue & White Army since day one this season has played a huge part in driving the players on to enjoy the incredible season we have had so far.

“Our attendances, much like the team, have grown and grown as the season has progressed, with Saturday being the third time since the turn of the year that the club has broken the 6,000 mark, confirming once again what we already know – that there’s no better or more loyal fanbase than those in SK3!”

Our average League attendance since Boxing Day has been an incredible 4,636, a record that would be the ninth highest in League 2, whilst also being higher than that of six clubs in League 1!

Those figures have no doubt been helped this season by the hard work done by everyone involved with the club’s Healthy Living Programme – a unique programme run by the club that will continue to inspire new generations of Hatters supporters.

The unique scenes of jubilation that greeted the final whistle at Edgeley Park – and further afield at Brewery Field – was surely the pinnacle of an incredible year for the players and coaching staff alike, as the whole of SK3 was rocking in a manner not seen in over a decade!

Everyone at the Club would like to thank each and every one of you for your unwavering support, and we hope that all your loyalty and dedication is repaid one last time next week at Nuneaton, in front of the thousands of travelling masses, from the best supporters in the world.