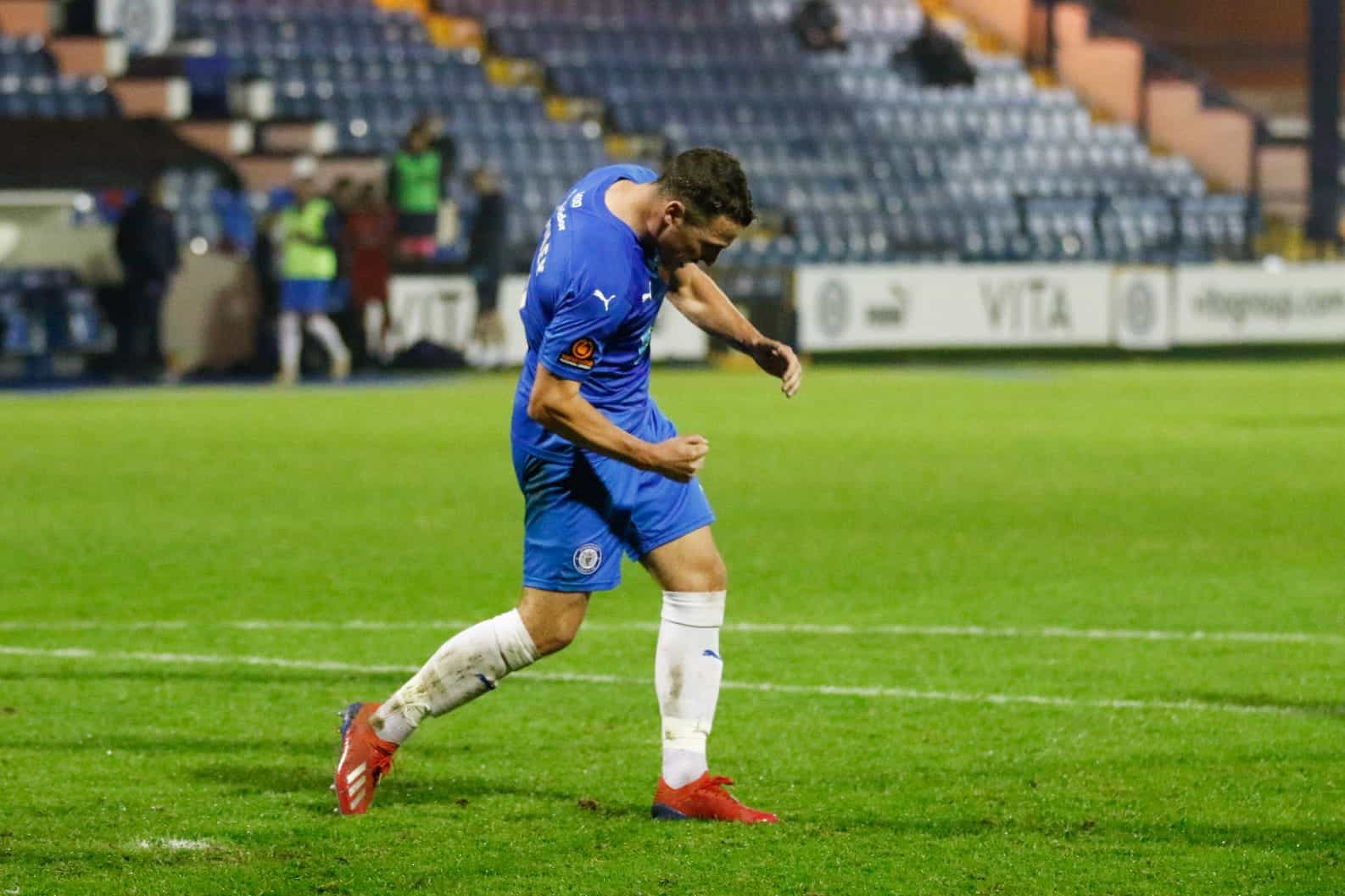 From having a Cup run that was over two weekends ago, the Hatters’ Cup now runneth over once more – after first-half goals from Richie Bennett and Alex Reid, together with two John Rooney penalties following the interval, saw them prevail in their replayed Fourth Round Qualifying FA Cup-tie against Chesterfield at Edgeley Park.

Although the ‘Spireites’ had won the original contest in SK3 on penalties, they were subsequently found by the FA to have fielded an ineligible player for it – and, having been granted an unexpected second attempt, County, in home action for the fourth time in a dozen days, made no mistake in securing a place in the First Round proper at Rochdale.

Pre-lockdown (or Bonfire Eve) fireworks lit up the chilly night sky around Stockport, as the Hatters took to the field showing three changes from the side that had started against Weymouth in National League action four days earlier. Connor Jennings, Jordan Keane and Adam Thomas were recalled in place of the injured Mark Kitching, the unwell Sam Minihan, and Lois Maynard who dropped to the bench.

Injuries elsewhere in the squad saw County name five substitutes – two fewer than the maximum permitted by the competition – including, as had been the case for the initial October tie, Academy players Jack Hopkins and Finley Stanyer.

The evening’s first chance of note also led to its opening goal. With only three minutes played, Rooney twisted and turned around the left side of the Chesterfield area, before unleashing a low shot on target – which goalkeeper Kyle Letheren kept out with his outstretched leg, only for Bennett, with his back to goal, to connect with the airborne ball and convert with an overhead kick into the roof of the net.

Jennings fired over and Rooney, from the edge of the box on this occasion, tested Letheren again, as the Hatters sought to build to build on their early lead – and Reid went close with a shot that the visiting ‘keeper did well to parry around the far post, following Jamie Stott’s cross from the left.

Jennings looked to have gone one better just before the half’s mid-point, but, on drilling past Letheren, he was flagged offside. And the Spireites’ inaugural opportunity shortly afterwards should have seen parity restored, had David Buchanan not placed his shot narrowly shy of the left upright when played through on goal.

But 10 minutes ahead of the break, County’s advantage was doubled. Bennett turned provider near the halfway line with an exquisite flick through to Reid, who raced through on goal before drawing Letheren out and slotting home.

Letheren remained busy prior to half-time – smothering a Rooney free-kick from 25 yards out, and claiming Stott’s cross on the left that took a deflection en route.

The Hatters resumed the offensive after the re-start – with Jennings half-volleying over from just inside the area, and Liam Hogan clearing the crossbar with a header from a Rooney corner on the right.

Substitute Scott Boden fired an effort into the right side-netting, and Ben Hinchliffe saved with his legs from Luke Rawson, as the Spireites countered. But with a little over 20 minutes remaining, the Hatters were awarded a penalty when Tom Denton handled – and, having taken the corner on the right that led to the infringement, Rooney stepped up to score from the spot.

Ten minutes later, County had a second spot-kick – following a foul by visiting captain Will Evans on Reid, and Rooney duly obliged again from 12 yards for his side’s fourth to seal, rather appropriately, a trip to Spotland three days hence.

Man of the Match: Hogan.