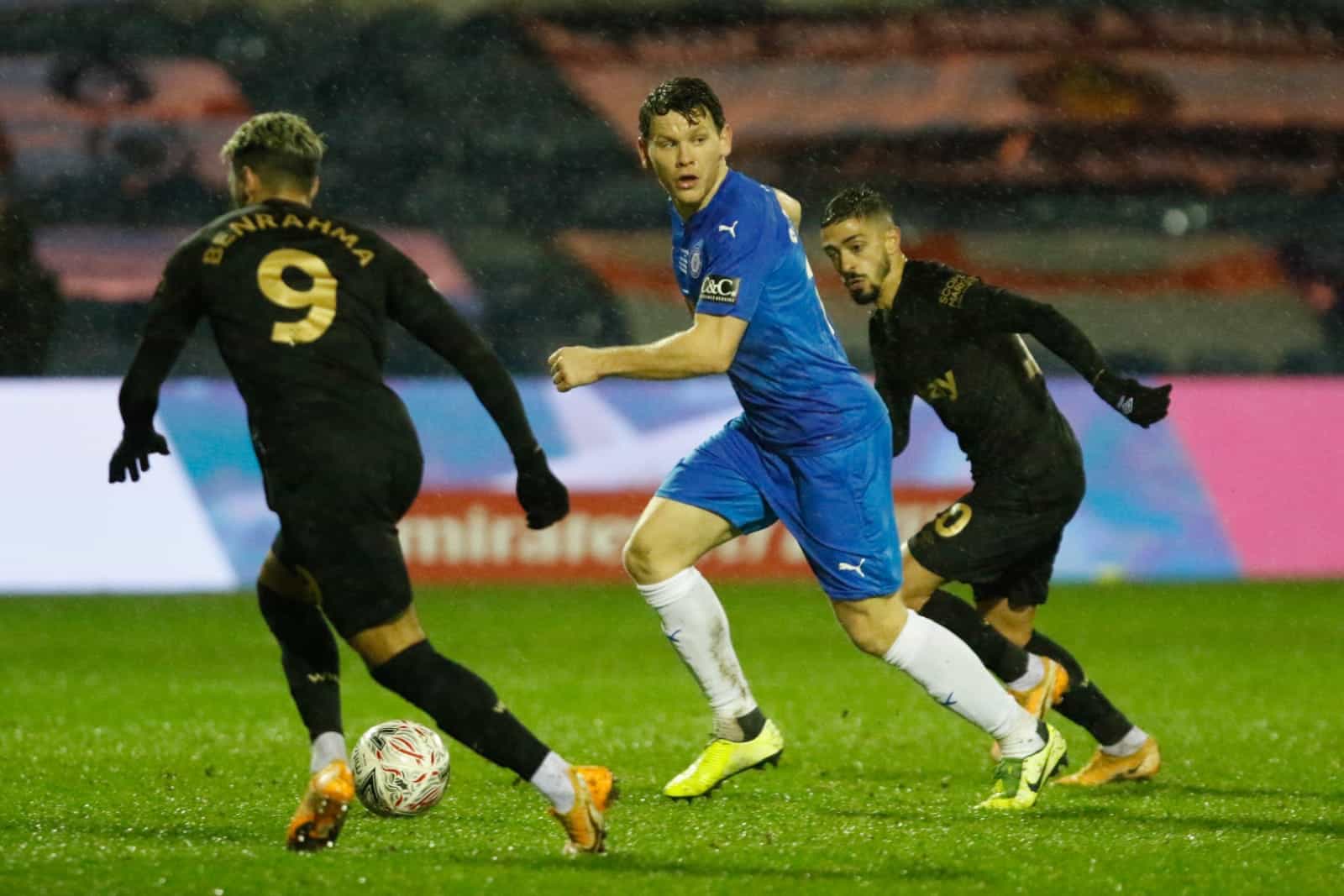 The Hatters’ first appearance in the Third Round of the FA Cup for 14 seasons saw them host Premier League West Ham from four tiers above, and do themselves immense credit by keeping the ‘Hammers’ at bay for 83 minutes before a Craig Dawson header settled the tie.

County took to the field, on a dank, drizzly night, in front of the television cameras and showing three changes from the side that had turned out against Altrincham in the National League nine days earlier.

Connor Jennings, Sam Minihan and Jordan Williams were brought in to replace Richie Bennett, Macauley Southam-Hales and Jamie Stott – whilst all those in the squad not handed starts, with the exception of the recently-returning Nyal Bell, were named among the nine substitutes permitted for the competition.

The Hammers, fielding a strong starting 11, created the night’s first chance with six minutes played, after England international Declan Rice’s cross from the right was brought under control and fired just shy of the near post by Said Benrahma. And, after another six, Andriy Yarmolenko unleashed a low shot from outside the box that fizzed beyond the opposite upright.

Referee Mike Dean temporarily paused play while fireworks exploded for a few minutes outside the ground behind the Railway End, before the Hatters earned their first corner – and, as it turned out, their first chance. Visiting goalkeeper Darren Randolph flapped at John Rooney’s delivery from the left, leading to a header towards goal by Liam Hogan that was cleared.

As County settled, so the visitors, while still superior in possession, became more restricted in their efforts on goal. Benrahma fired wide of the left post from distance, before Williams volleyed past the corresponding upright at the away end. Benrahma also fired his side’s first attempt of the night on target, only for the shot to be comfortably gathered by Ben Hinchliffe.

Half a dozen minutes before the break, Michail Antonio did go dangerously close for the Hammers with a deflected shot that flew past the right post. But County continued to defend well and soak up any pressure – fully deserving to go in at half-term with honours even.

Heavier rain during the interval made the going rather more stodgy underfoot by the time the teams re-emerged. But the Hatters carried on where they had left off by defending resolutely, as West Ham pressed in the energy-sapping conditions.

Not that County remained in the home half, mind. Shortly after the hour, Jennings had a well-struck shot blocked by Dawson – and newly-arrived substitute Bennett suffered a similar fate minutes later, before the Hammers, in an attempt to find a way through at the other end, introduced Jarrod Bowen and Tomáš Souček as a high-profile attacking double-substitution.

Rooney’s tight shot from the left was held by Randolph, and Benrahma fired well beyond the County goal after picking up a Hinchliffe clearance. But the visiting substitutes began to make their mark, as Souček headed over – and then, with seven minutes remaining, Bowen whipped in a peach of a cross from the right for Dawson to glance home and book the Hammers a meeting with Doncaster in the Fourth Round.