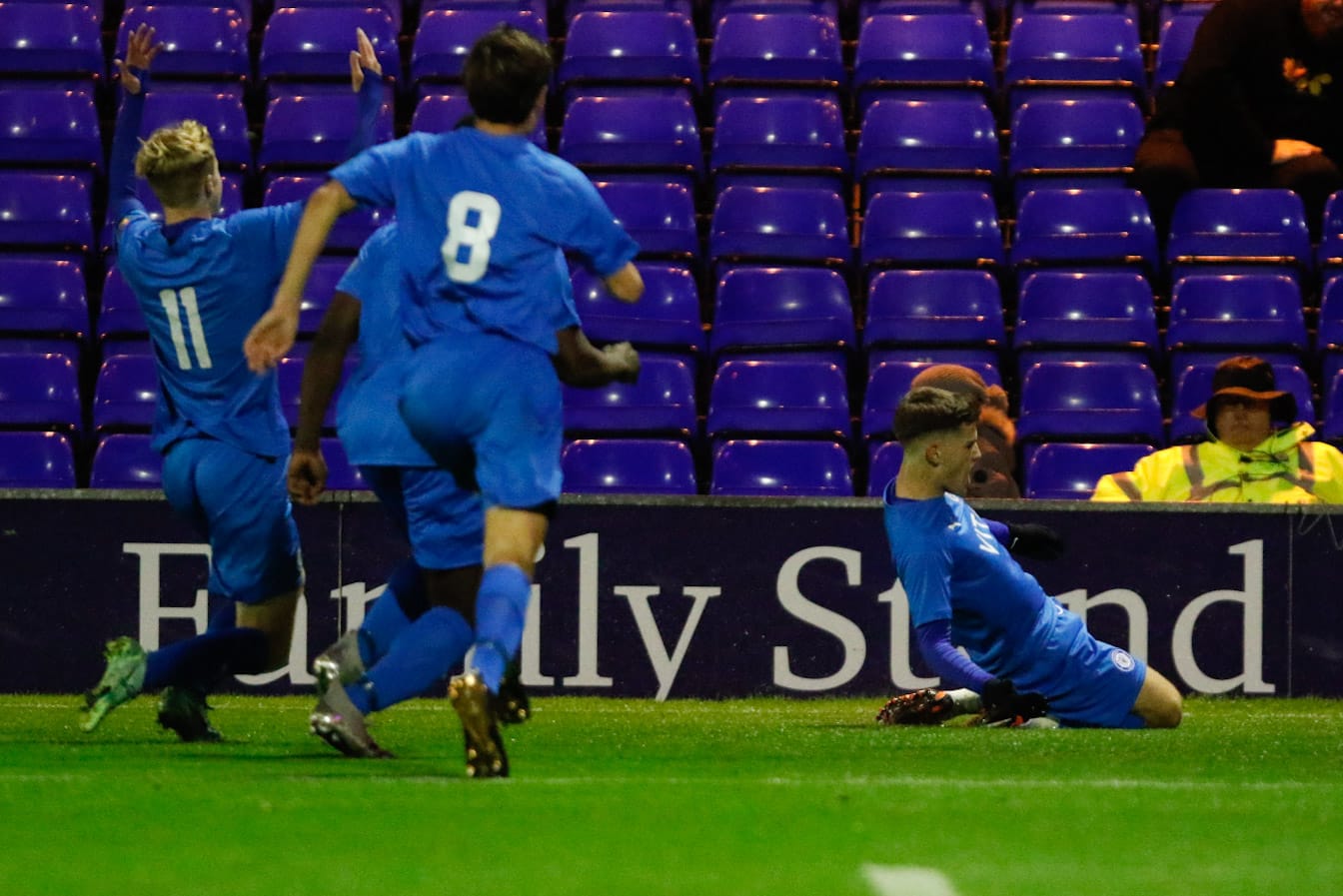 A sensational first-half display from Damien Allen’s academy side saw County cruise through to the First Round of the FA Youth Cup, in a 3-1 win against Hyde United under the floodlights at Edgeley Park.

A brace from the impressive Toby Green, either side of a Cody Johnson strike, had County 3-0 up and in complete control going into half-time after dominating the opening 45 minutes.

Despite Hyde pulling a goal back just past the hour mark, the Hatters held on comfortably enough in the second half to secure progression to the next round in front of a healthy crowd of 566.

Manager Damien Allen made three changes to the side that beat Prestwich Heys 1-0 in the last round, as Kai Johnston, Cody Johnson and Josh Osifo all came in, with Thomas Sheil, Badar Al Akkad and Oliver McFadyen making way.

For all of County’s dominance in the opening exchanges, it was Hyde who had the first shot on goal of the game five minutes in, an ambitious half-volley from distance which forced goalkeeper Daniel Harrison into a comfortable enough save.

That was as good as it got for the visitors in that first-half though as County soon set about taking control of proceedings, and duly took the lead just nine minutes in thanks to a moment of real quality from Toby Green.

A slick County move ended with the ball being switched from left to right towards Green, who took the ball down brilliantly before jinxing his way across the edge of the penalty area, beating a couple of challenges and cutting a sublime finish back across the goalkeeper and into the bottom corner to give us the lead – a moment to savour in front of the Cheadle End.

From then on it was all County; left-back Josh Edwards coming close to a second goal in as many Youth Cup games with a header from close range that was cleared off the line by a Hyde defender, before Osifo saw an effort well saved at the near post.

At this point Green was causing all sorts of problems for the Hyde defence with his quick feet and dribbling ability, and he nearly had an assist to his name too when he played a lovely through-ball towards Jamie Walsh, who couldn’t quite gather it in – the Hyde ‘keeper off his line quickly to smother the danger.

A second goal at this point felt inevitable, and it duly arrived just before the half-hour mark as another good ball in from the right-hand side wasn’t dealt with by the Hyde defence, the ball deflecting into the path of midfielder Cody Johnson, who made no mistake from close range.

County were flying at this point, and just five minutes later effectively finished the tie off with a third goal, and again it came from the left foot of Toby Green as his powerful strike from distance squirmed under the grasp of the Hyde ‘keeper and trickled into the back of the net – leaving the visitors shell-shocked at the break.

After that first-half blitz, the second 45 was a much quieter affair as Hyde toiled for a route back into the game, with chances at a premium in the opening exchanges.

They did manage to grab a goal back just past the hour mark, as an inswinging free-kick from the right-hand side was nodded home at the back post to spark hope of an unlikely comeback.

Far from unsettle Damien Allen’s side, however, the goal seemed to jolt County back into action as they pressed for a fourth goal. Again it was Green, desperate for his hat-trick, who proved to be the dangerman for County, showing great skill to weave his way past a few challenges inside the box before dragging an effort just wide of the post.

Josh Edwards again came close with a dipping free-kick pushed away by the goalkeeper, whilst substitute Keith Banda had two late opportunities to seal the win, the first lofted just wide of goal whilst the second was saved by the goalkeeper’s feet.

A fourth goal would not have flattered County after a hugely impressive performance, against the side who knocked us out of this competition last season, with big roars of celebration from the home dugout greeting the final whistle. A place in the First Round proper of the competition now awaits for this vibrant young County side.