The Hatters took a further break from National League action to embark upon the FA Trophy trail – enjoying a comfortable four-goal victory against fellow NL side Grimsby at Edgeley Park.

First-half goals from Will Collar and Ryan Croasdale put County in the driving seat, before the visitors were reduced to 10 men shortly after the interval. Ash Palmer, and Collar with a second, then added to the score to put the Hatters’ place in the Fourth Round draw beyond any doubt. 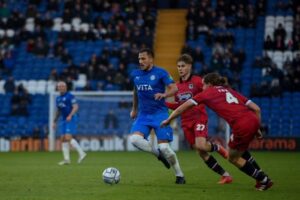 The Hatters turned out for the last time ahead of the festive season, showing four changes from the starting line-up at Torquay a week previously. Zeki Fryers, skipper Liam Hogan, Connor Jennings and Sam Minihan replaced Ollie Crankshaw, Jordan Keane, Mark Kitching (all three of whom were included among the seven substitutes permitted for the competition) and Macauley Southam-Hales.

The visiting ‘Mariners’, for their part, were suffering from a number of Covid-related absences, and fielded a much-changed team from that which had taken to the field against County in the National League just over three months earlier – with only four survivors from their starters at EP on the last day of August. Appropriately enough for the last shopping Saturday before Christmas, the captain’s armband was taken for the afternoon by Lennell John-Lewis. 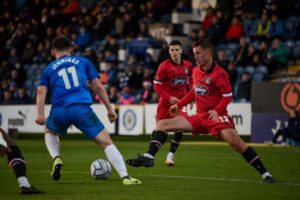 With three minutes on the clock, the Hatters fashioned the afternoon’s first chance in the wintry sunshine – as Ryan Rydel’s cross from the left was headed past the far upright by Jennings. And shortly afterwards, the latter turned provider, courtesy of a flick through to Paddy Madden whose shot was blocked by the legs of visiting goalkeeper Max Crocombe.

Grimsby threatened through Ryan Sears – only for Croasdale’s intervention to put the ball beyond the right post and avert the danger. But the County midfielder was then to make an even more telling contribution at the other end, when, with a dozen minutes played, the Hatters took an early lead – after Croasdale dispossessed Alex Hunt on the edge of the visitors’ box, and fed Collar who slotted home from six yards.

The same duo combined around the mid-point of the half, when Croasdale nodded on to Collar whose header was glanced just shy of the left post. And Madden almost doubled County’s advantage by cutting in from the right and unleashing an angled shot that Crocombe parried behind.

Seven minutes ahead of the break, Collar fed Minihan whose deflected, goal-bound shot was scrambled clear by Sears. But four minutes later, the Hatters had a second goal following another joint effort between Collar, who laid the ball off, and Croasdale, who fired in from close range.

Grimsby forced two early corners upon the resumption, although the Hatters soon continued their dominance up front – with Palmer seeing his header, from a Rydel corner on the right, cleared off the line.

The visitors’ cause received a further setback eight minutes after the re-start, when John-Lewis, looking rather less than the best seasonal advert for goodwill, received a straight red card for leading with his arm in a challenge on Palmer. 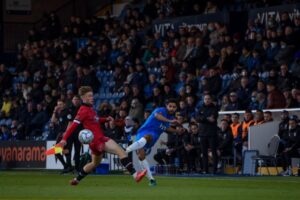 The Hatters proceeded to make their numerical superiority count – with Collar blasting over, and Jenning firing at Crocombe, before Palmer’s head connected with an out-swinging Rydel corner from the left to make it three for County on the hour.

A dozen minutes later, Collar netted his second and the team’s fourth, after the ball fell to him following another corner from the left – delivered this time by substitute Tom Walker, who had replaced Rydel – and his half-volley took a deflection in through a crowded box.

Man of the Match: Collar.