The Hatters won for the first time in four weeks, and achieved their third ‘double’ of the season, after edging out Gainsborough Trinity by the odd goal in five at The Northolme.

In the course of an open game, played amid changing wintry conditions, Rhys Turner’s opening strike was cancelled out by a first-half equaliser – before goals from Adam Thomas and Jimmy Ball following the break made sure of victory for County, even though the struggling hosts pulled one back 15 minutes from time. 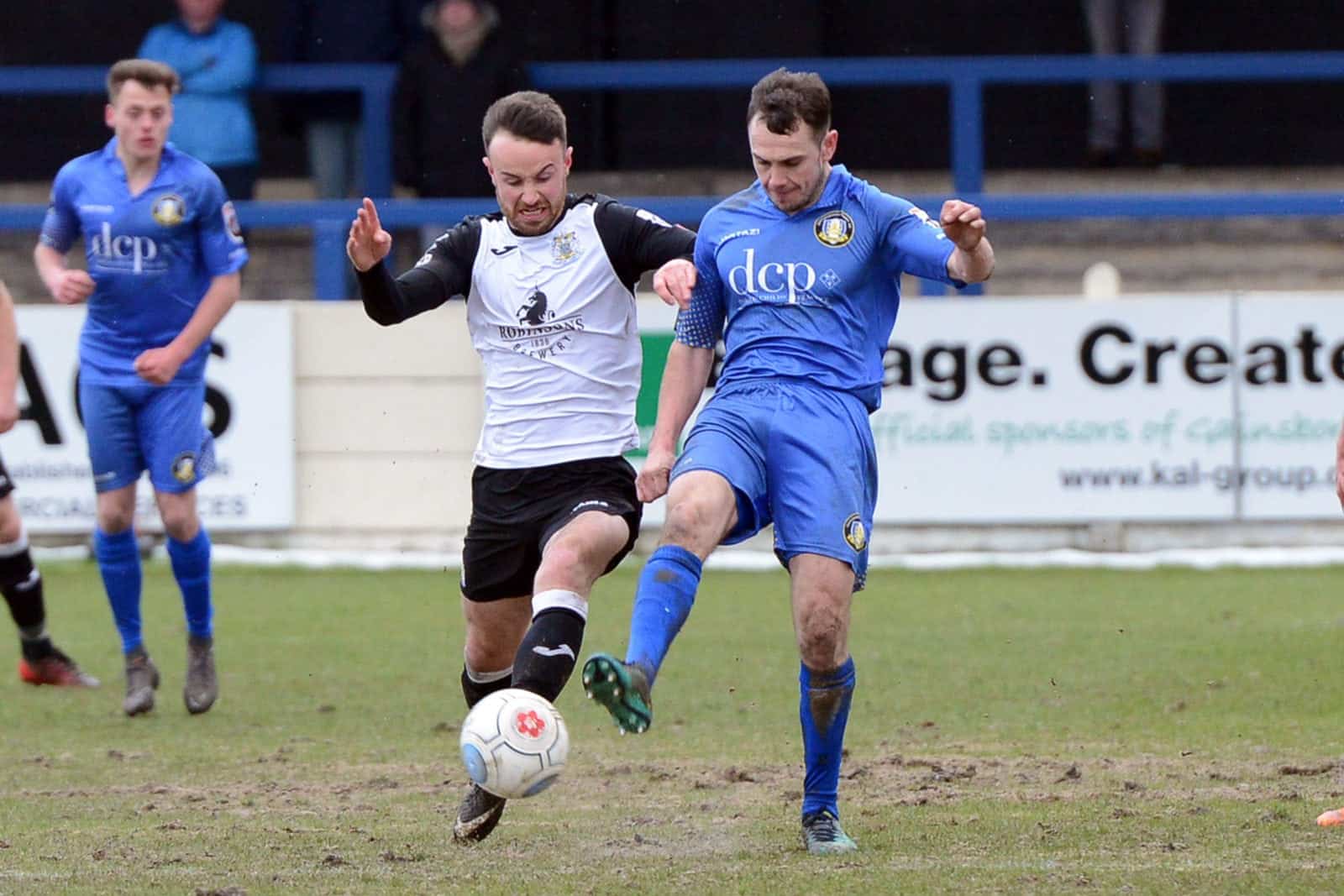 Jim Gannon made a conscious footballing decision – and probably a less conscious metaphorical one! – by keeping faith in a starting line-up against the ‘Holy Blues’ that had also taken to the field seven days earlier to face the ‘Saints’ of Brackley Town. There was one change on the bench, with Sam Minihan making a welcome return to the squad for the first time in almost six months. 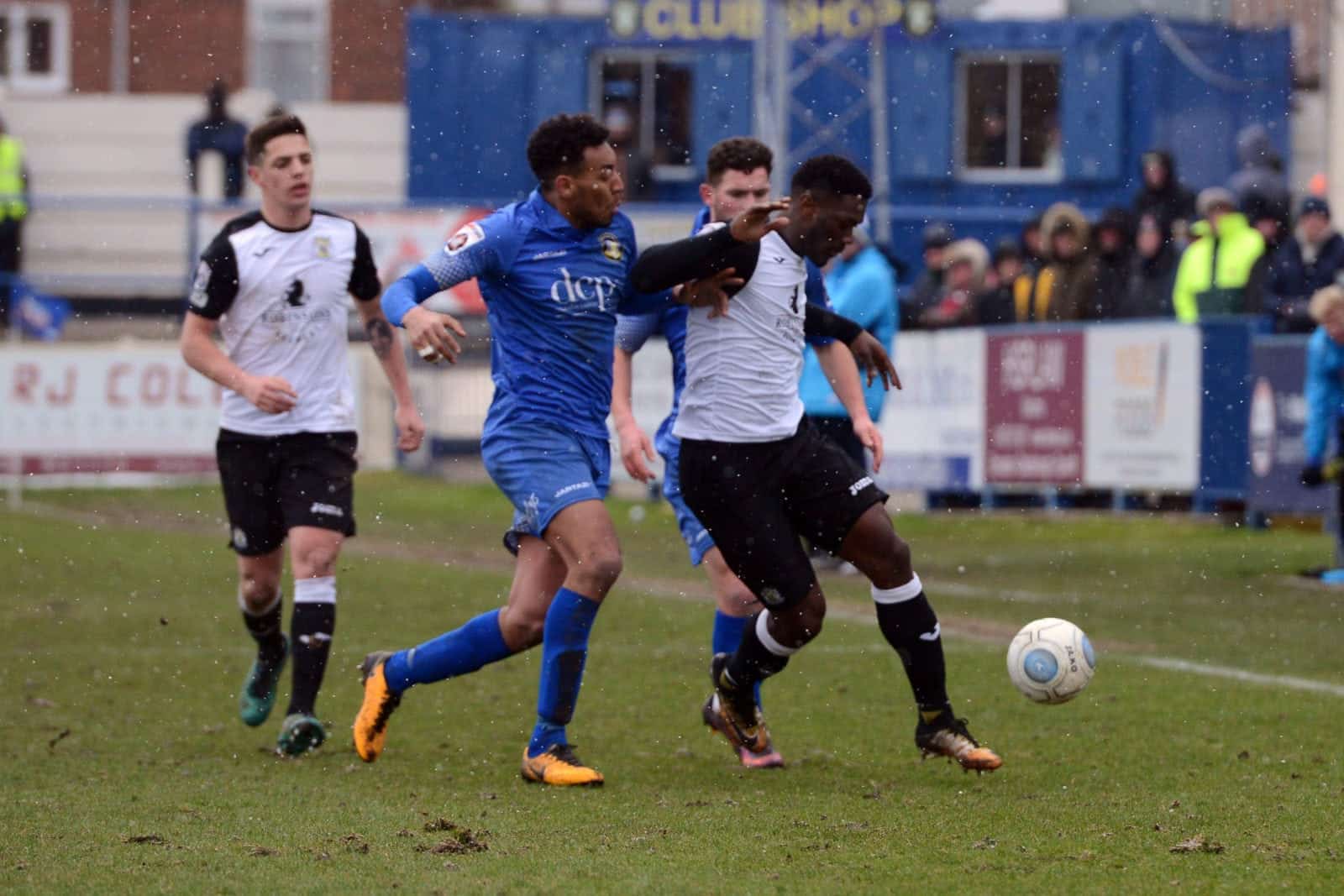 Beginning in a 3-4-1-2 formation, and attacking with the wind on their backs, the Hatters got off to a lively start. Before the first quarter of an hour was up, Thomas had fired over an early chance from six yards, while Turner, Ball and Scott Duxbury had all seen shots stopped by home goalkeeper Henrich Ravas.

A County goal looked on the cards, and it duly arrived after 17 minutes when Turner beat the offside trap to latch on to Ball’s through-pass, before executing a sublime chip over Ravas. 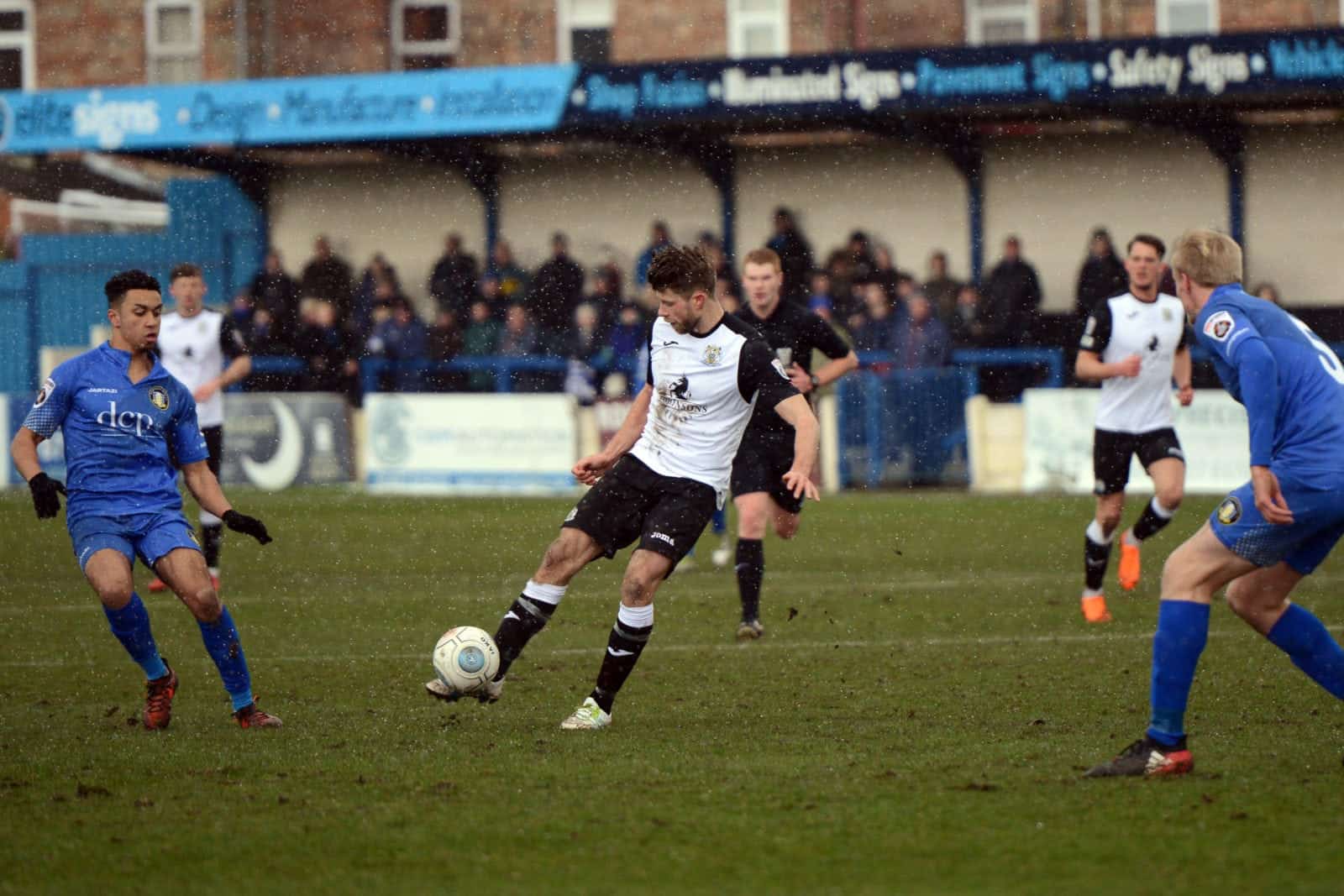 The Hatters continued to press – as Jason Oswell headed a Thomas cross from the right into the side-netting beyond the far post, and Harry Winter just cleared the crossbar with a curling shot from the edge of the box.

For the first 25 minutes, Ben Hinchliffe – facing an attack that included his namesake, making a Trinity debut on loan from Hull City – had enjoyed a quiet afternoon in the late winter sunshine. But he had to be at his best a minute later to deny Nicky Walker, who was through on goal. 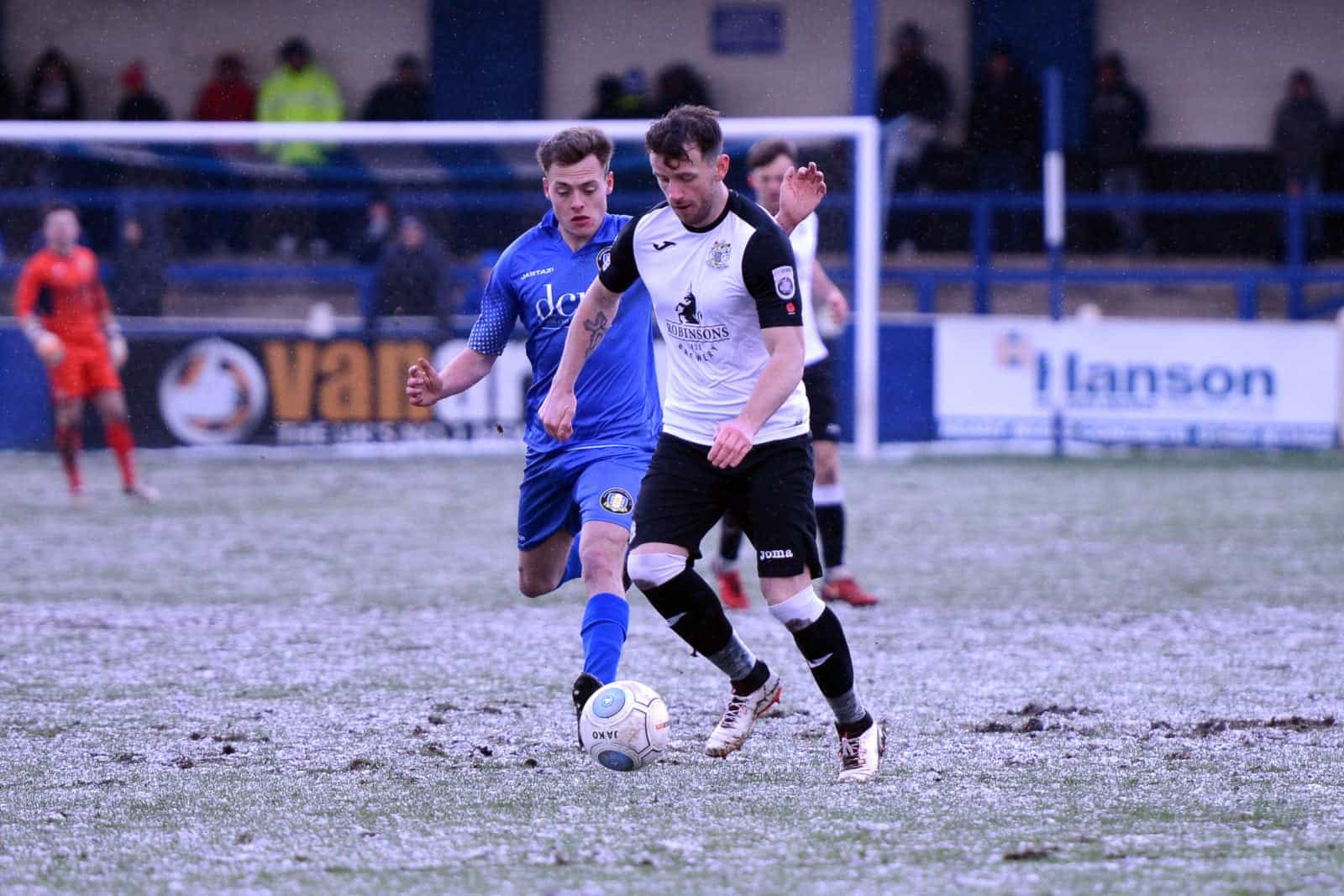 And in the very next minute, the hosts drew level. Walker’s low cross from the left was right-footed home from just inside the area by Trinity captain Nathan Jarman.

The hosts assumed the ascendancy for much of the remaining period before the break – with Brandon Fleming, Jarman and Craig King all firing over – although County went closest in the final minute when Matty Warburton turned 15 yards out and struck the bar. 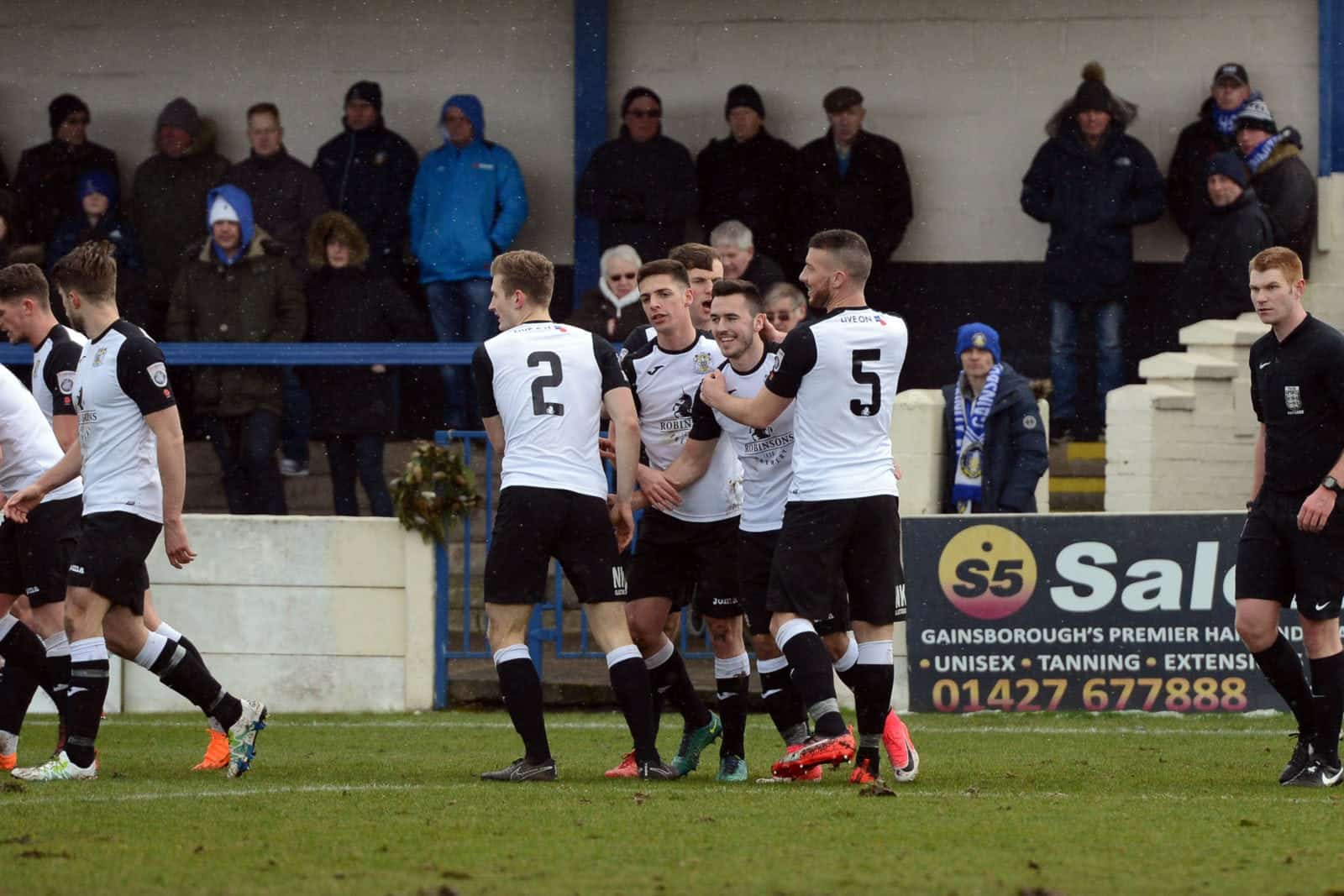 The Hatters began the second half as briskly as the first, and were rewarded three minutes in. Oswell’s aerial challenge on Ravas saw the ball fall for Thomas to slot home from six yards. 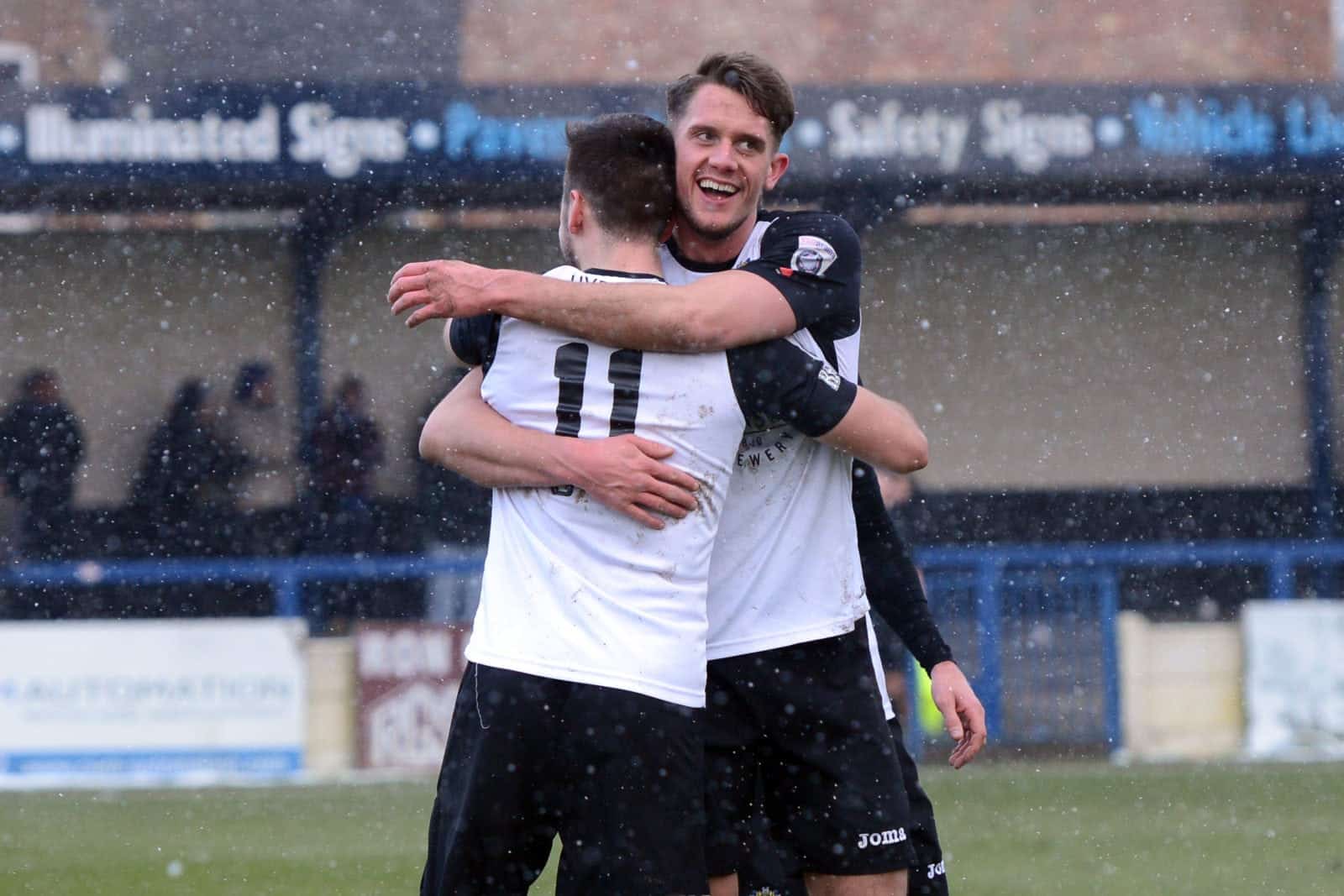 Snow from the east arrived on the hour, but County continued to exhibit the right stuff in the face of the white stuff – going further ahead after 66 minutes, when Turner’s shot past Ravas took a deflection off Stainfield on to the left upright, before Ball tapped the rebound into an empty net. 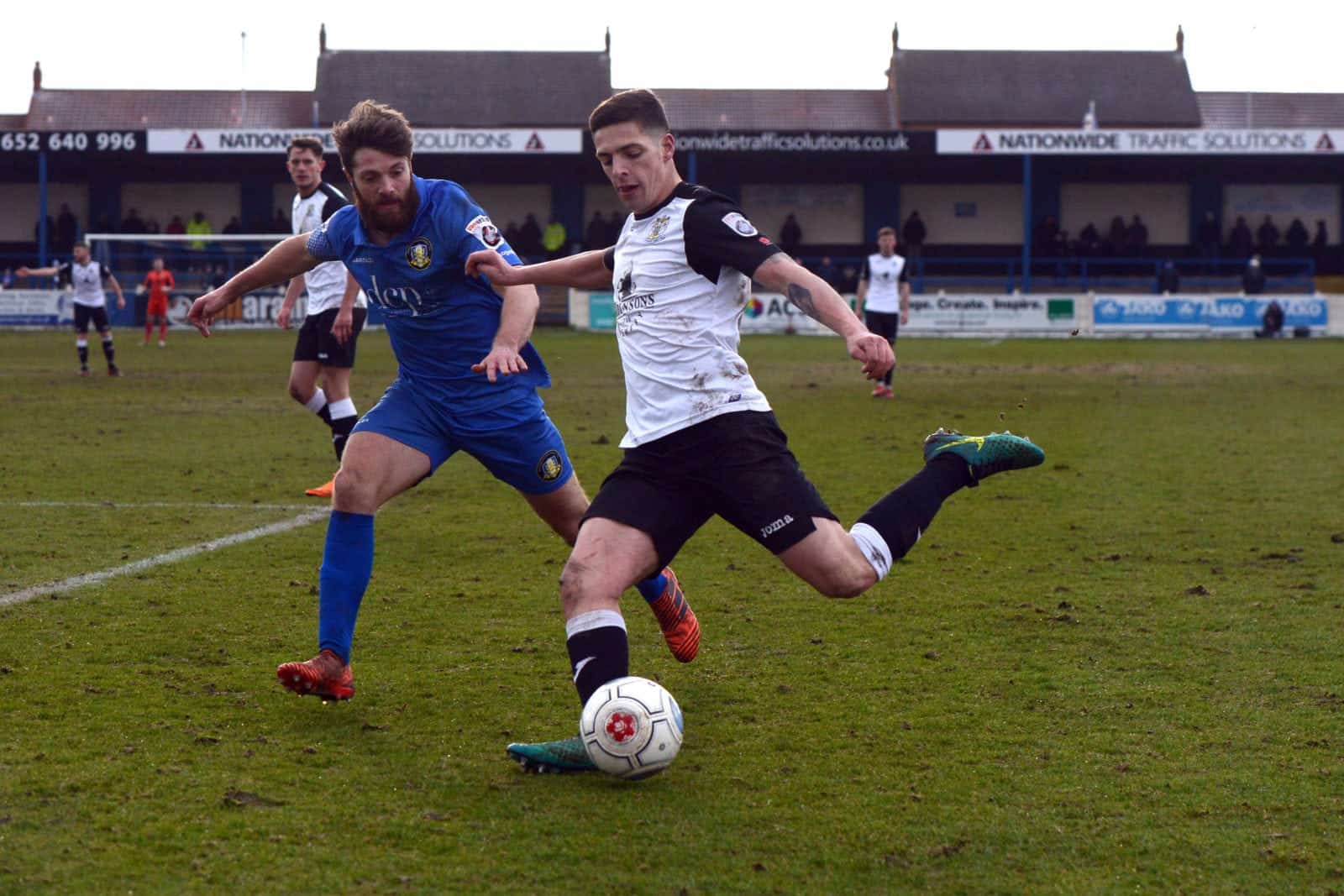 The Hatters remained dominant in attack, and Warburton shot narrowly over after being played through by one of Winter’s several exquisite, defence-splitting deliveries. But, as the blizzard reached its zenith, the Holy Blues reduced the arrears with 75 minutes played, as Stainfield swivelled to convert a free kick from the left by substitute Simon Russell. 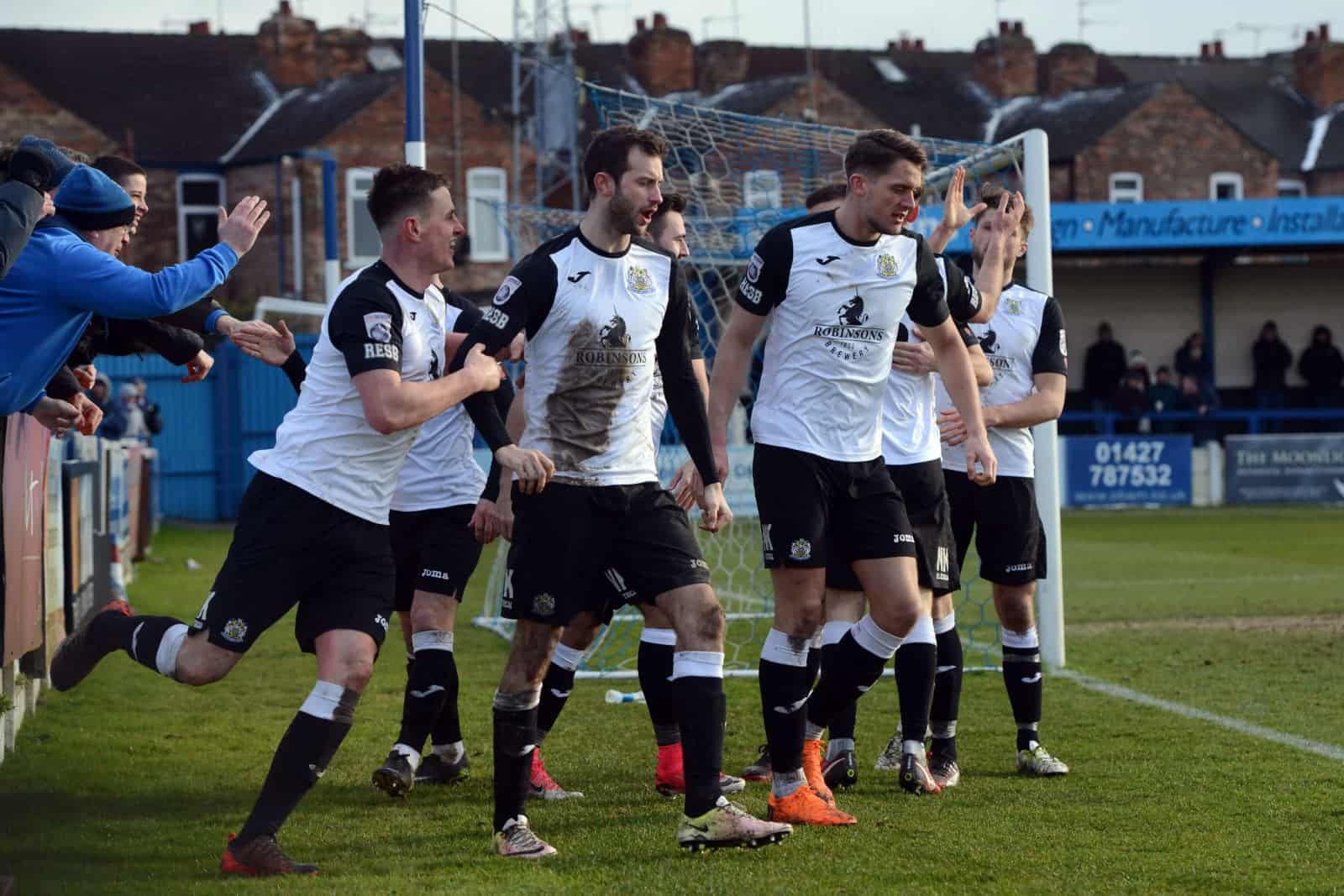 The snow came and went – as did corners at either end – and Oswell was thwarted with two minutes remaining, when one-on-one with Ravas. But the Hatters held on to return across the Pennines, with care in the conditions but with three points in hopeful pursuit of the play-offs.

Man of the Match (as judged for the Non-League Paper): Winter.