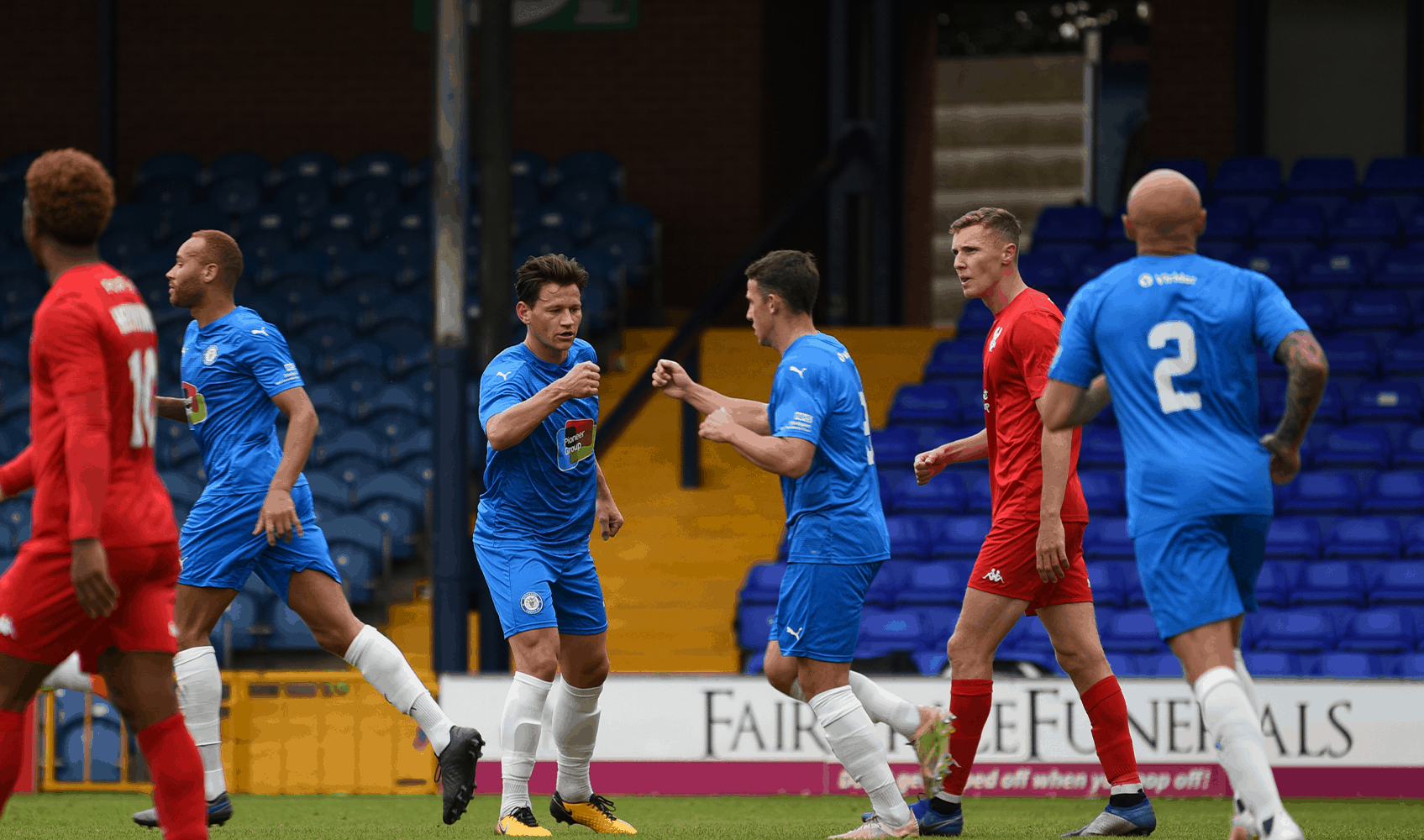 The Hatters rounded off the most unusual of pre-season schedules with another encounter behind closed doors at Edgeley Park – registering, in the process, a sixth successive friendly victory to set themselves up in great shape and spirits for the start of the National League campaign at Torquay next Saturday.

Goals late in each half, courtesy of a John Rooney penalty and another strike in the closing stages by substitute Nyal Bell, saw off Kidderminster from the National League North after the visitors had taken an early lead.

County took to the field in the intermittent late September sunshine, showing two changes from the side that had kicked off at York a week previously – with Connor Jennings and Mark Kitching replacing, respectively, Alex Reid and the injured Jordan Williams.

For the second time in a fortnight at EP, following Curzon Ashton’s visit, a pair of  former Hatters – on this occasion, Amari Morgan-Smith and the Harriers’ captain, Lewis Montrose – featured for the guests.

Eight minutes were on the clock before a first chance of the afternoon was registered – with Richie Bennett latching on to Connor Jennings’ through-ball, before seeing his well-struck low shot smothered by the trialist goalkeeper.

But the visitors, with their first attempt six minutes later, went one better, as Morgan-Smith’s half-volley from the left edge of County’s box flew past Ben Hinchliffe, with the aid of a deflection, to give ‘Kiddy’ the lead.

The Hatters responded by enjoying a long spell of possession without creating clear-cut opportunities – and going closest by way of a dead-ball effort, with Rooney’s free-kick nine minutes before half-time curling narrowly beyond the left post.

But a minute ahead of the break, the same player converted the equaliser that their efforts deserved – as Kitching was tripped in the visitors’ area by Keith Lowe, and County’s number eight made no mistake from the penalty spot.

James Jennings assumed set-piece duties early in the new half – firing a free-kick from the edge of the ‘D’ around the left upright – before Omari Sterling, after the hour, did likewise for the visitors from further out.

Second-half chances from open play remained at a premium, although County went close after another free-kick – from Rooney – led to a scramble that saw Bell strike the crossbar.

But Bell, fresh from his 86th-minute goal-scoring heroics against York, once again struck decisively for the winner late on – firing home Sam Minihan’s low cross from the right to make it six of the friendly best for the Hatters.