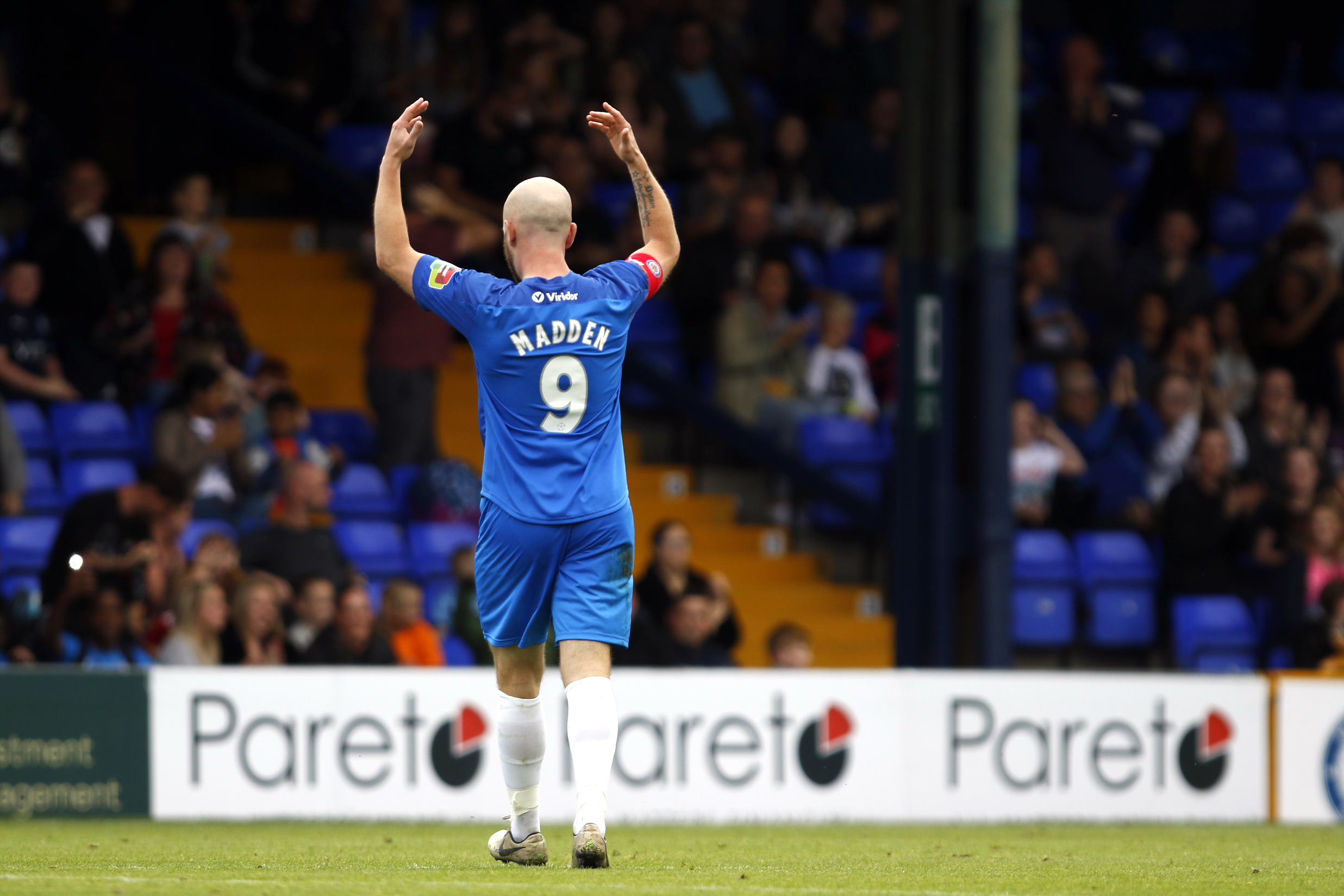 Having secured back-to-back wins for the first time this season, Simon Rusk’s County go in search of win number three on the bounce against Aldershot this weekend, to further close the gap at the top of the table.

Ollie Crankshaw’s debut goal secured another come-from-behind win for County last weekend at Weymouth to leave us 9th at the close of play, and just a point behind Notts County in the final play-off spot after their 4-1 defeat at home to Woking.

There was a full round of National League fixtures this week, with every side except for County in action due to the odd number of teams (23) in the league.

The results in general were positive for County that night, with only three of the sides above us at the start of the day (Grimsby, Boreham Wood and Halifax) emerging with all three points. We did, however, drop two places to 11th, with Woking and Bromley climbing above us. The gap to the play-off places is now two points, although we have a game in hand on six of the current top seven.

Aldershot, meanwhile, were in action at fellow strugglers Dover Athletic on Tuesday night and picked up a crucial win, just their second of the season, thanks to Toby Edser’s second-half winner. Those three points weren’t enough to lift The Shots out of the relegation zone however, as they remain in 21st place, one point from Weymouth and safety.

Tickets for Saturday’s game are still available to buy online. Click here to buy yours today, and be part of another Edgeley Park match day!

After several seasons battling against relegation from the National League, including one year where they finished in the bottom four before receiving a reprieve once Gateshead went into administration, last season proved more successful for the Hampshire side.

Despite stumbling out of the blocks with no wins in their first four, Danny Searle’s side spent most of the campaign in the comfort of mid-table, even spending time in the top half and flirting with the idea of an unlikely play-off push.

They had a habit of picking up results against some of the top sides in the National League too, doing the double over Notts County, beating Wrexham 3-0 and taking points from County in a 0-0 draw at Edgeley Park.

Any worries over another relegation battle were a distant memory long before the National League North and South were null and voided, and despite a disappointing run of just four points from their last seven games the Shots finished in a respectable 15th place, closer to the play-off places than the bottom three.

Some key players have departed the Recreation Ground over the Summer, most notably their two joint-top scorers; captain Josh Rees and striker Harry Panayiotou. Midfielder Rees, who chipped in with 12 goals in the league, has left to join Boreham Wood, whilst Panayiotou has headed north of the border to sign for Livingstone.

Perhaps hit by those losses, the new season got off to the worst possible start for Aldershot as they lost their opening five games of the season, with only Dover’s 12-point deduction keeping them off the bottom of the table.

It proved to be sixth time luck for The Shots as they finally got their season up and running with a 3-2 win at Southend, but despite following that up with a 2-2 draw with Wealdstone the club decided to part company with manager Danny Searle. The former Braintree boss had two full seasons in charge at the Club, leading them to 18th and 15th placed finishes, as well as an FA Trophy quarter-final.

Former Aldershot midfielder Mark Molesley was appointed as Searle’s replacement later that day; Molesley led Weymouth to back-to-back promotions in 2019 and 2020, before an unsuccessful spell in charge of Southend last season.

His first game in charge ended in defeat at Halifax, and they were 2-0 down again last weekend against Wrexham before that game was called off, due to a waterlogged pitch.

Despite their struggles, they have still been able to rely on the goals of Corie Andrews, who has scored five goals already this season after joining on loan from AFC Wimbledon in the Summer to mark himself out as the one to watch in this Aldershot side.

Molesley was off the mark in midweek at Dover too with a much needed boost to Aldershot’s hopes of avoiding another relegation struggle, and they will be looking to build on that this weekend at Edgeley Park.