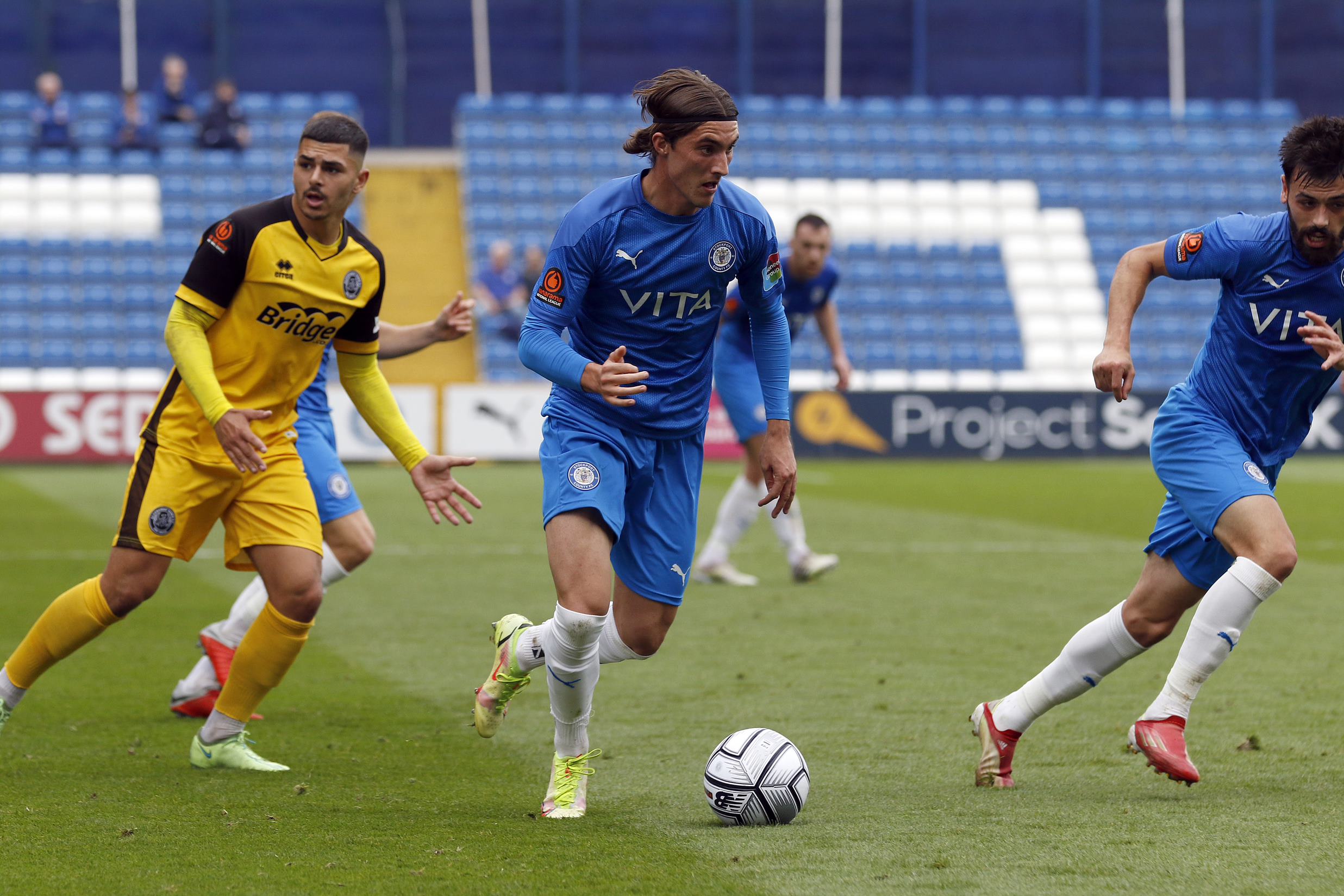 County face a big test this weekend in the search to continue our recent winning run, as we return to league action against promotion rivals Notts County at Meadow Lane.

Our National League campaign was briefly put to one side this last week as we were twice in cup action, beating Stamford AFC 3-0 in the FA Cup last Saturday before following that up with a win at Chester in the Cheshire Senior Cup.

In the league, we have won our last three games to lift us up to tenth in the table, two points behind Altrincham in the final play-off spot and one point behind Saturday’s opponents.

Notts County also booked their place in the First Round of the FA Cup this week, and a trip to Rochdale, although they were made to do it the hard way after being taken to a replay by Northern Premier League side Tamworth; drawing 0-0 away from home before beating the Lambs 4-0 on Tuesday night.

Their last league game saw them end a three-game losing streak with a 2-0 win at Yeovil Town, to leave them in ninth place and just outside the play-off spots after a mixed start to the season.

After being relegated from the Football League for the first time in the club’s history in 2019, Notts’ non-league exile is now into its third season after they again suffered play-off heartbreak last season.

The Magpies, who were proudly known as the world’s oldest football league club before that relegation, lost the National League play-off final to Harrogate Town in 2020, and were beaten in the semi-final last time out after losing 4-2 in extra time away at Torquay.

They booked their place in those play-offs after a 5th place finish in the National League, but it was anything but a straightforward season for Notts, who parted company with manager Neil Ardley in March.

Ardley, now at Solihull Moors, had been in charge of the club since November 2018, and was dismissed with the side sat in 6th place and with games in hand on the sides above them.

Highly rated 38-year-old Ian Burchnall, formerly of Swedish club Osterunds and Norwegian side Viking, was soon announced as his replacement – his first coaching role in English Football following his time in Scandinavia.

For a time it looked as though Notts may miss out on the play-offs altogether after initially struggling under their new Head Coach, winning just two of his first nine league games and exiting the FA Trophy to Hornchurch.

A last minute winner from Ruben Rodrigues against eventual champions Sutton sparked a dramatic late turnaround in form for the side though, as they won five and lost just one of their final seven games to secure that top seven finish.

Over the Summer, the side lost a couple of their key players in the shape of midfielder Jake Reeves, scorer of the winner in this fixture last season, who has joined Stevenage, as well as winger Enzio Boldewijn who has signed for Sutton.

They have since strengthened with the notable additions of Torquay defender Kyle Cameron, midfielder Matt Palmer from Swindon Town and former Manchester City Youth Captain Ed Francis, who has signed from Harrogate Town. Striker Kairo Mitchell has also joined from Chesterfield, and got his first two goals for the Club in that win against Tamworth on Tuesday.

They got off to a flying start to the season too with a 5-0 win away at Barnet on the opening day, before following that up with draws at home to Torquay and away at Wrexham.

Seven games in to the new season they were still unbeaten, and sat just two points off the top of the early league leaders Grimsby Town. A 1-0 defeat at Altrincham in their following game, however, was the start of a three game losing run for Burchnall’s side as they found themselves on the wrong side of some crazy games.

Leading 1-0 at home to Woking, the Magpies conceded three goals in eight second-half minutes en route to a 4-1 defeat, before throwing away a 2-0 lead with ten minutes to go against ten man FC Halifax Town just a few days later – eventually conceding the winner in the 100th minute of the game.

They have since bounced back somewhat with those victories against Yeovil and Tamworth, and have continued to be able to rely on the fine form of Portuguese playmaker Ruben Rodrigues, who has chipped in with six goals already this season. Alongside striker Kyle Wooton, who has scored five, he is undoubtedly the dangerman for the home side this weekend.