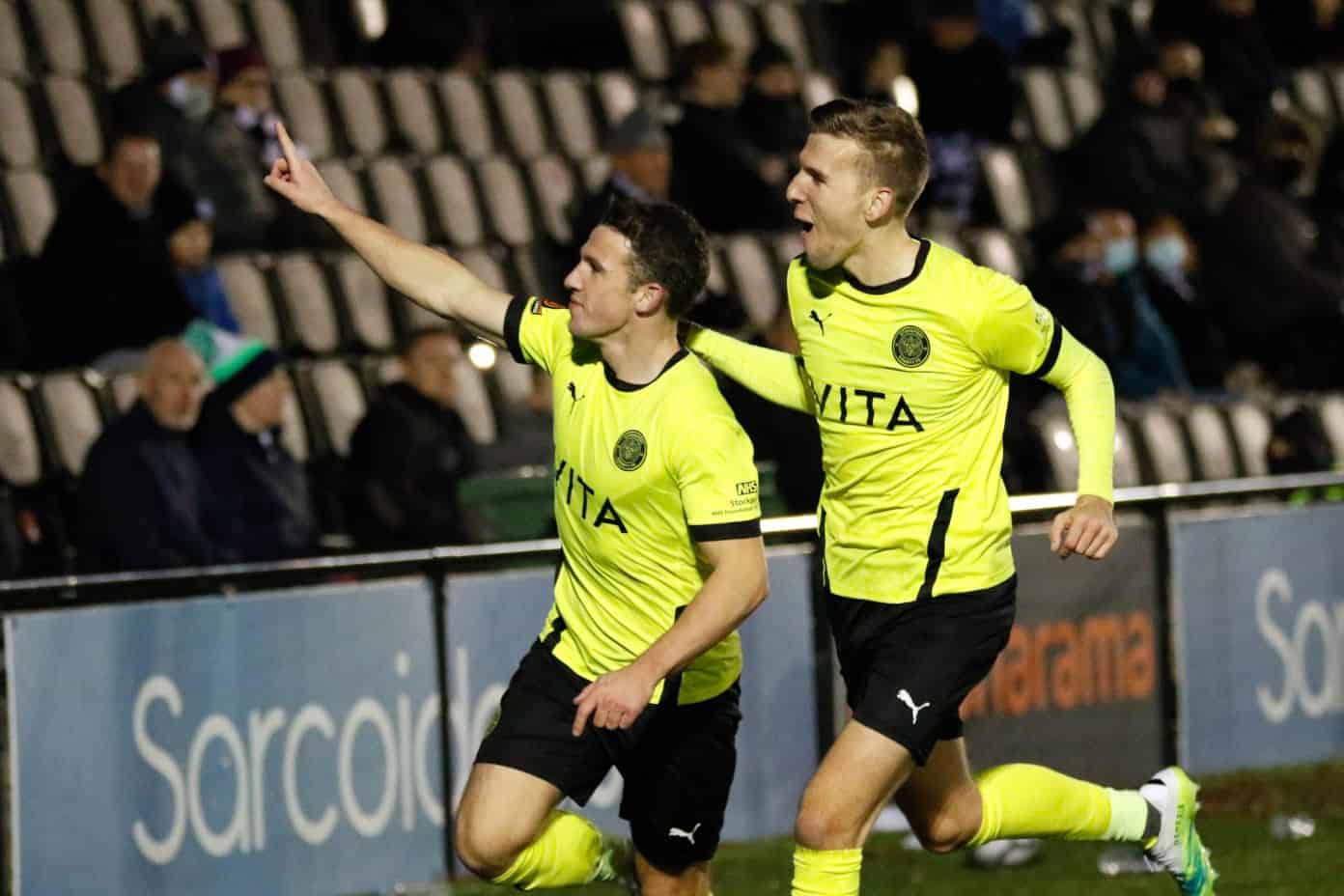 County roared back into National League action after over a month away with a superb 0-2 win at high-flying Bromley, in a fixture which saw the return of spectators at Hayes Lane.

Goals either side of the interval by Alex Reid and John Rooney secured three points for The Hatters in London, in what was County’s first taste of league action since Halloween.

Croasdale took a place on the bench, whilst defensive duo Stott and Palmer both missed out through injuries picked up during the week.

The Hatters fielded a 3-4-1-2 formation from the outset, with James Jennings returning for his first start since the 2-5 win at Wealdstone in mid-October to slot into a back three alongside Jordan Keane and captain Liam Hogan.

Alex Reid and Richie Bennett both started in attack for the first time together since the 4-0 FA Cup replay win over Chesterfield exactly a month prior, in an attacking County line-up at Hayes Lane.

The hosts, who headed into the tie in excellent form with no defeat in their last six outings, spurned a glorious chance to take the lead inside the opening five minutes, when Reeco Hackett-Fairchild broke at pace but saw his one-on-one effort saved superbly by Ben Hinchliffe.

County responded instantly when Connor Jennings half-volleyed a long ball off the base of the Bromley upright and agonisingly away from goal, before Richie Bennett headed a John Rooney corner wide in a breathless start in London.

And it was The Hatters who took an early lead on the quarter of the hour mark – John Rooney rose highest to head goalward, and although the midfielder’s header was hacked off the goalline, the clearance cannoned straight into Alex Reid and into the back of the Bromley goal.

Reid, playing the role of the pantomime villain at Hayes Lane after his early strike, saw a huge chance to double County’s lead go begging on the half-hour mark, as he swept Mark Kitching’s pull-back wide of the near post in an entertaining first half.

Some heroic Hatters defending minutes later kept County in the lead, as Hackett-Fairchild rounded Hinchliffe only for Jordan Keane to somehow prod the forward’s effort off the line whilst falling to the turf, before captain Liam Hogan miraculously swiped the follow-up again off the line.

Bromley’s leading goalscorer Michael Cheek ensured that the visitors’ lead remained intact just before the interval, as he spooned Joe Kizzi’s cross over the bar from close-range with a glaring miss – and, after four first-half minutes, County went in at the break in the lead having found some success getting in behind a Bromley defence pushing high up the pitch.

Sam Minihan replaced the goalscorer Reid for the resumption of proceedings as The Hatters looked to secure their lead, although Cheek again spurned a big chance when he planted another Kizzi cross wide of Hinchliffe’s goal whilst unmarked inside the area.

County landed another blow on the hosts bang on the hour mark, however, when substitute Minihan rolled a cross into the box which the talismanic John Rooney picked up and calmly slotted home to double the lead.

Bromley still looked to chip away at The Hatters’ lead, with Chris Bush hammering the inside of the post from long-range and Cheek spurning another big chance late on – but Gannon’s men held out for a big three points, ahead of Tuesday evening’s return to London with a trip to Barnet.