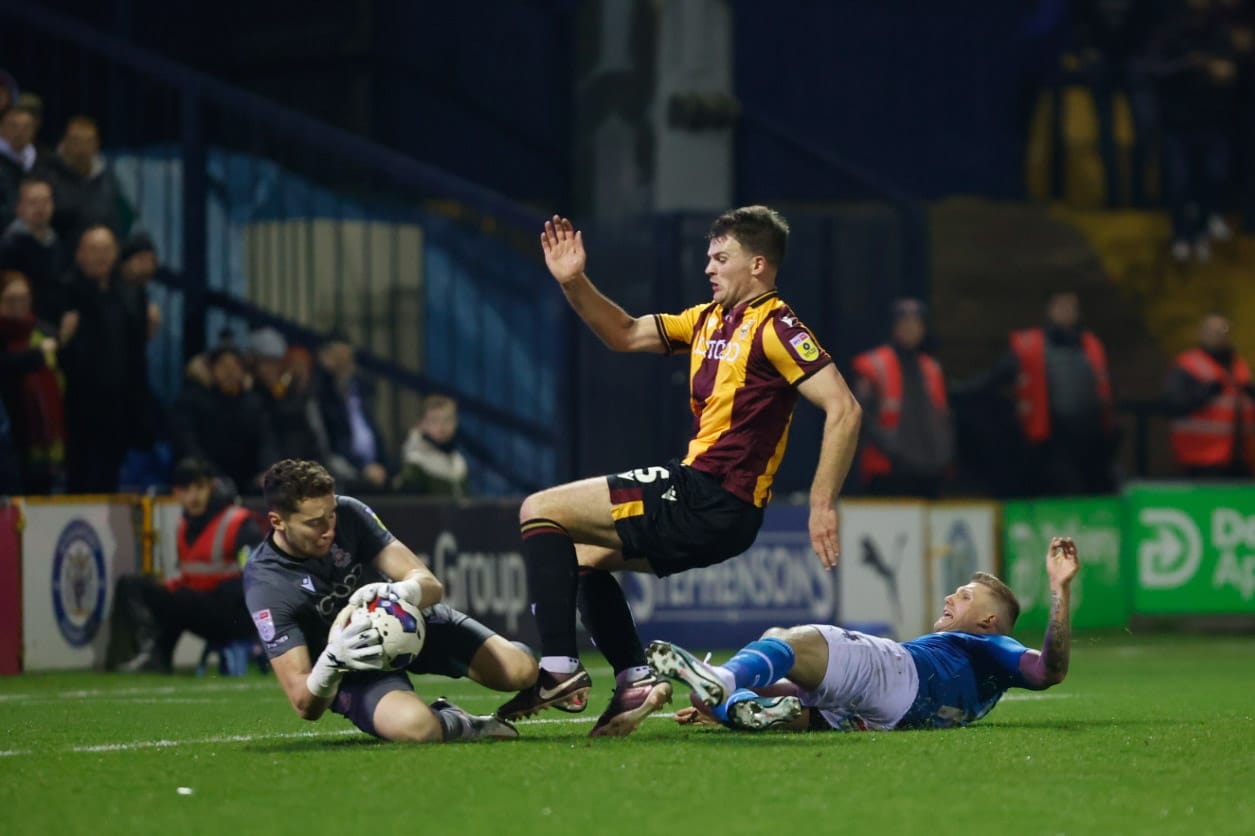 The Hatters’ first midweek match of 2023 saw them share the spoils, and remain within three points of the play-off positions, following a stalemate under the Edgeley Park lights against Bradford City.

Following a first half in which chances were at a premium, County enjoyed the greater share of possession and chances after the interval – albeit without making the crucial breakthrough.

Following a week of wintry weather, during which their weekend fixture at Crewe had fallen victim to frost, the Hatters took to the field in rather milder, but still slightly chilly, conditions, and showing one change from the line-up that had started against Northampton 10 days earlier. Kyle Knoyle made his full debut in place of the injured Antoni Sarcevic, having appeared as a substitute during that previous game at EP – while Jack Stretton, embarking on his second spell as a Hatter, was handed a place on the bench.

Knoyle, only 90 seconds into his first County start, found the ball at his feet to the right of Bradford’s goal – but blazed over the evening’s inaugural opportunity of note. And Knoyle turned potential provider just after the quarter-hour mark, courtesy of a corner from the left with which Kyle Wootton connected to head past the near upright.

Those attempts notwithstanding, the first half remained remarkably light on significant action in either final third, and the two teams – whose sole goal-less meeting in the Football League to date had been their very first one, almost 120 years ago – went in deadlocked at the break.

The contest was certainly in need of a spark – and with both sides, upon the resumption,  kicking towards their own supporters packed behind the goals, the fresh ingredients off the pitch were there for it.

And on the pitch, things did liven up a tad, too – with Abo Eisa drilling a low shot for Ben Hinchliffe to dive and smother, before the Hatters twice tested Hinchliffe’s opposite number, and grandson of former County goalkeeping legend Ken Mulhearn, Harry Lewis.

Lewis first scrambled around the right post a Will Collar volley, following Ryan Rydel’s cross on the left. And Bradford’s Number One again came to the rescue moments later, by glancing over (with his own head!) Neill Byrne’s goal-bound header, after the central defender had latched on to a Rydel corner from the opposite flank.

Ryan Johnson then propelled two headers off target from corners taken by Knoyle on the left, and later did likewise again from beyond the far post by heading another effort towards goal that was blocked by visiting skipper Richie Smallwood.

A couple of yellow cards had been brandished to staff in the opposing dugouts during the reverse fixture at Valley Parade three months or so earlier, and Bradford boss Mark Hughes was shown one on this occasion for impeding Knoyle ahead of a County throw-in. His captain, Smallwood, was also carded late on for fouling Myles Hippolyte.

Cards there might have been, but the goals did not, in the event, arrive – leaving a crowd of nigh-on 9,000 with a league scoreline between the two sides not seen since 1903.

Man of the Match: Byrne.