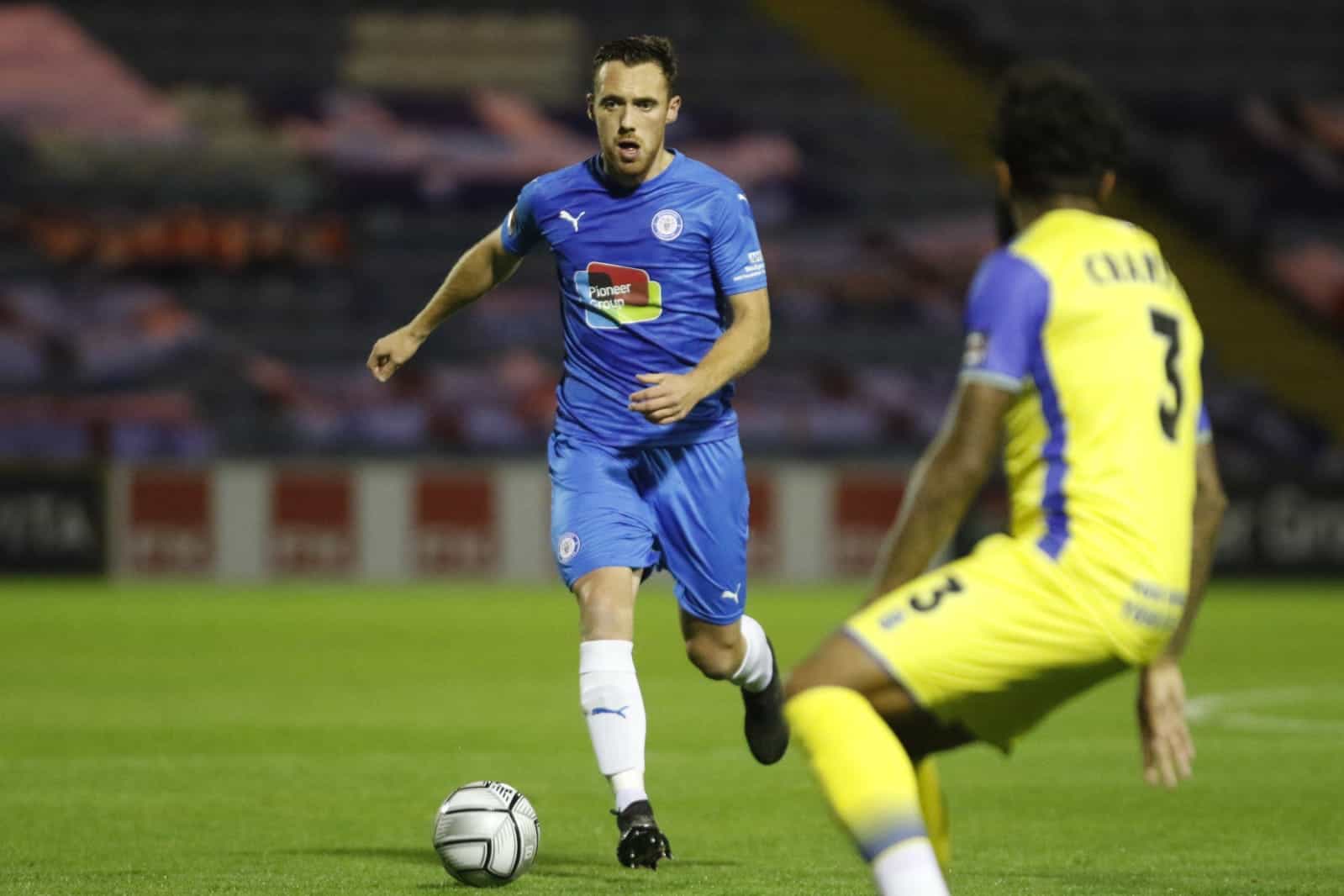 The Hatters returned to National League action at Edgeley Park, and extended their unbeaten run to five matches – albeit without notching up a fifth successive victory, as their contest under the lights in SK3 against fellow high-fliers Solihull Moors ended goalless.

Heavy daytime showers had given way to calmer evening weather, as County took to the field showing two changes from the side that had started in the FA Cup-tie against Chesterfield three days previously.

Ryan Croasdale was handed his full County debut, while Connor Jennings was recalled – replacing Ash Palmer, who was unwell, and the injured Lois Maynard. Of the three former Hatters now plying their trade at Solihull, only Jimmy Ball turned out for the Moors – with knocks ruling both Stephen Gleeson and Jamie Ward out of proceedings.

Having earned two corners in the opening four minutes, County went close to taking the lead from the second of them, as Richie Bennett met John Rooney’s delivery from the right with a bullet of a header that visiting goalkeeper Ryan Boot reacted sharply to parry.

Boot was called into action again half a dozen minutes later to cut out at his near post Jordan Keane’s cross from the right, and play continued to be focused primarily in Solihull’s half as the Hatters registered another four corners ahead of the first period’s mid-point.

A break by the Moors shortly afterwards almost saw them go ahead, as Joe Sbarra’s ball from the left by-line was deflected towards goal by Jamie Stott – but Croasdale cleared off the line by dint of breathtaking acrobatics.

A goal-line clearance at the other end denied Keane, after he had connected with Rooney’s, and County’s, eighth corner of the evening – before Cameron Archer, having been teed up by Cameron Coxe from the right, headed over the Hatters’ crossbar.

With three minutes of the half remaining, the contest witnessed yet another closest of calls – in this instance for the Moors, as Alex Reid’s sweetly-struck first-time shot, following Sam Minihan’s cross from the left, hit the underside of the bar and bounced on, and away from, the line.

Within a couple of minutes of the resumption, a long clearance by Ben Hinchliffe enabled the Hatters to fashion a chance as Bennett headed down to Reid – but the latter’s shot lacked pace, and Boot comfortably smothered.

Hinchliffe himself was then called into action with his hands, and did well to turn Ball’s free-kick around the right post – before spectacularly tipping over an Archer shot on the break which had taken a wicked, looping deflection off Minihan.

After Boot parried behind a half-volley from Reid, the end-to-end fare rather subsided, as each side proceeded in turn to cancel out the other and earn what was overall a fair division of the spoils.

Man of the Match: Croasdale.