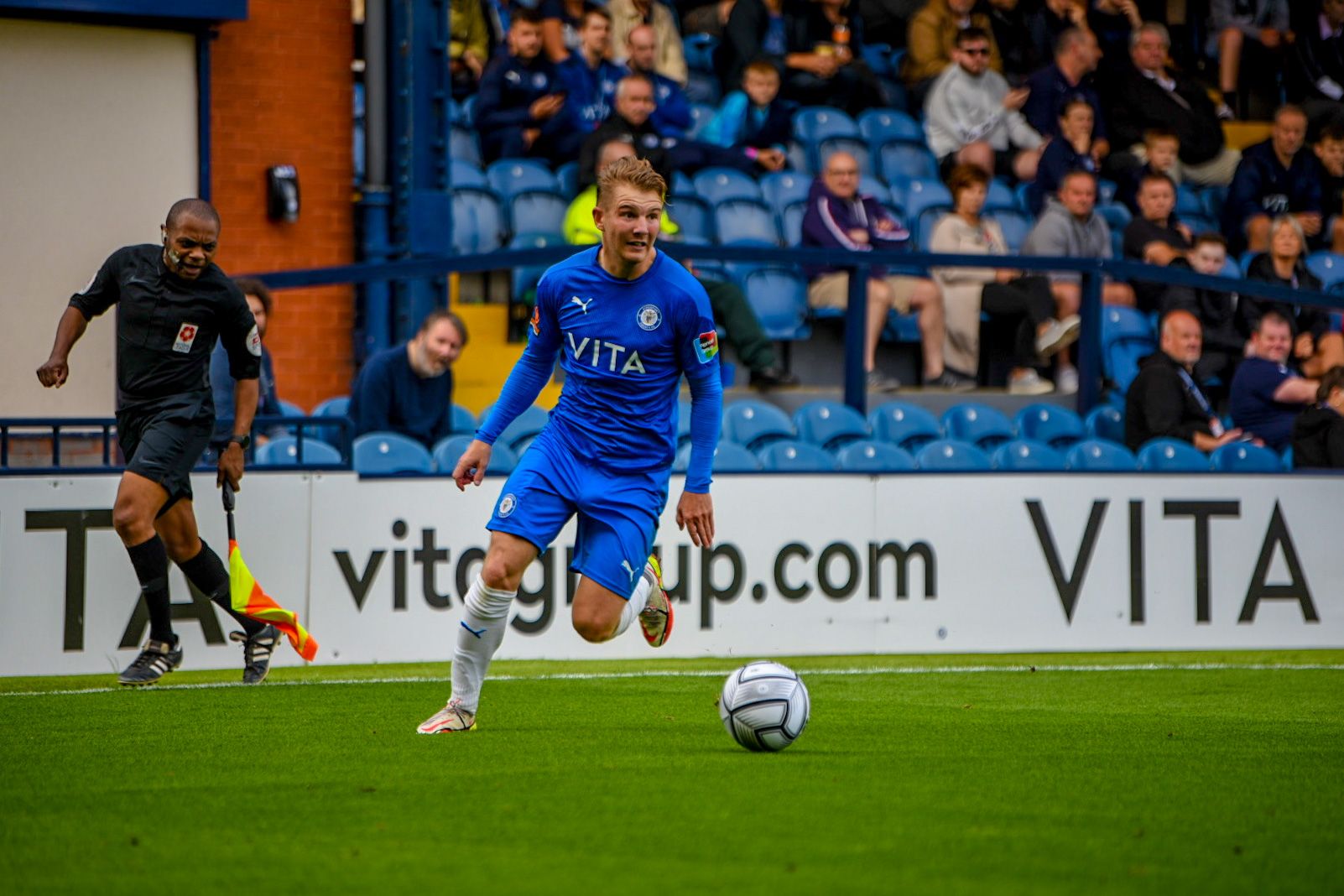 The Hatters returned to Saturday afternoon action at Edgeley Park for the first time since the season’s opening day, but it proved an afternoon for them to forget as they slumped to a three-goal defeat against Yeovil Town.

To make matters worse, they had Ash Palmer dismissed early in the second half – following which the visitors scored twice to add to their first-half opener.

County took to the field showing two changes from the starting line-up at Boreham Wood a week earlier – with captain Liam Hogan and Alex Reid returning in place of Will Collar and the injured Jordan Keane. Both new arrivals – namely Kenan Dünnwald-Turan, on a month’s loan from Scunthorpe, and Zeki Fryers – were named among the substitutes.

The early exchanges brought a corner apiece for each team within the space of a minute – although the first half was at its midway-point before the contest’s first attempt of note was unleashed, and Ben Hinchliffe turned Charlie Wakefield’s shot from the right around the near post.

But just a few minutes later, Wakefield had gone one better – courtesy of a low drive that ricocheted off the left post and into the Cheadle End net to give the ‘Glovers’ the lead, and see County’s defence breached for the first time in five hours.

Hinchliffe saved County just after the half-hour mark, when he tipped over Dale Gorman’s pile-driver – whilst at the other end, newly-introduced substitute Tom Walker delivered a cross from from the right that Reid glanced wide of the far upright.

While Scott Quigley remained frustratingly unavailable due to injury, his Yeovil namesake Joe was making his presence felt up front – squaring from the right to Josh Staunton who blazed high and wide.

With half-time looming, Walker lined himself up to shoot from just inside the box – only for his effort to cannon off Gorman and loop over the crossbar.

Fryers took his County bow in the back three immediately upon the resumption, and the Hatters proceeded to earn three corners within the first four minutes as they started the new half on the front foot.

But within another four minutes, County had gone two-down and been reduced to 10 men. Palmer was shown a straight red card for his challenge on Tom Knowles in the box, Referee Jackson pointed to the spot, and Joe Quigley sent Hinchliffe the wrong way from 12 yards.

Quigley then curled a low shot around County’s right post, as the Glovers sought to maintain the upper hand, before Yeovil goalkeeper Grant Smith saved well from Ben Whitfield and Walker fired over on the rebound.

Dünnwald-Turan was introduced after the hour, and soon presented with an opportunity to halve the arrears – as well as to make an early County name for himself – after running on to Hogan’s long ball and through on goal, but he dragged his shot wide of the left post.

Paddy Madden, an ex-Glover, then took advantage of a defensive slip before homing in towards the visitors’ goal – only to be denied by Smith, who blocked with his legs. But in the event, it was to be of little consequence, as, with four minutes remaining, Yeovil substitute Adi Yussuf took advantage of a similar chance and calmly slotted past Hinchliffe for his team’s third.