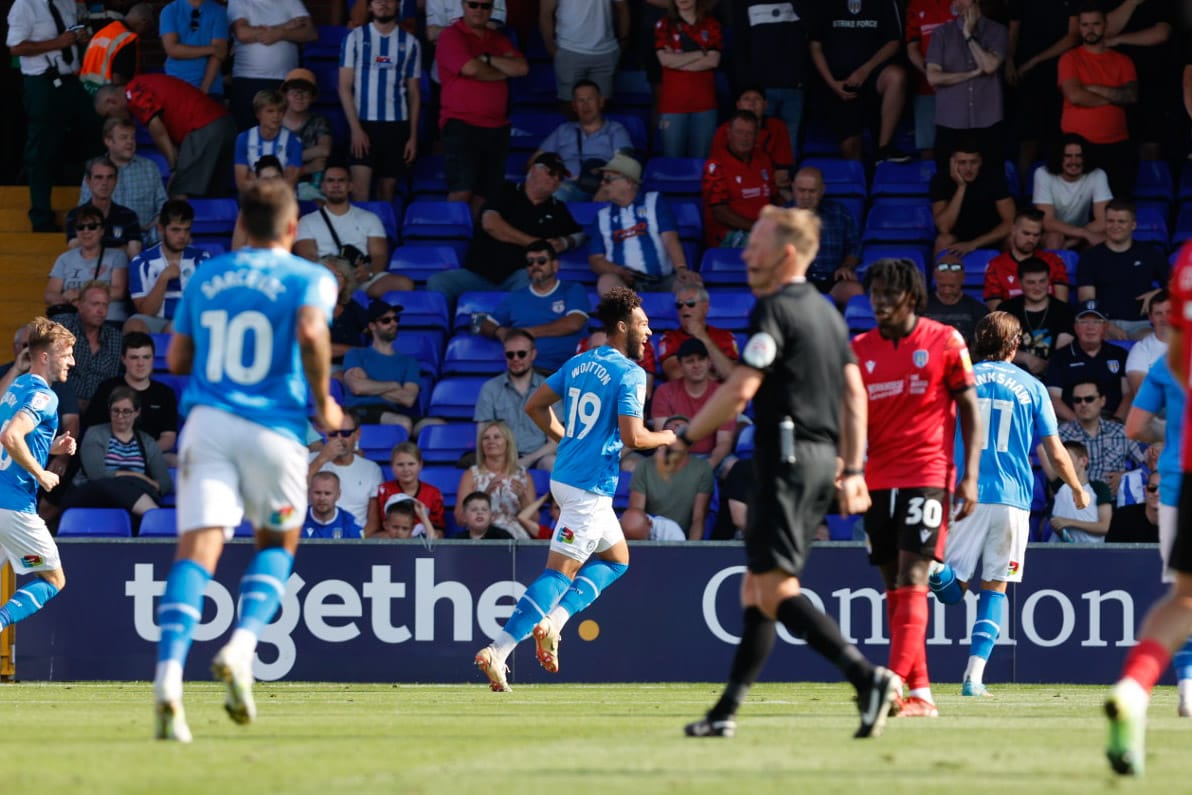 The Hatters returned to League Two action at Edgeley Park, and got their campaign properly up and running with their first points, as well as a first victory against Colchester in over 32 years.

A headed second-half goal by substitute Kyle Wootton separated the teams – but the hosts were good value for the win, having largely monopolised the opportunities on offer.

The peak of the August heatwave was continuing as the Hatters took to the field in a sweltering 30 degrees, and showing three changes from their League Cup starting line-up at Harrogate four days earlier (but double the number from that for their most recent L2 fixture against Stevenage the previous Saturday). Macauley Southam-Hales, Antoni Sarcevic and skipper Paddy Madden were the players recalled, in place of Elliot Newby, Connor Evans – both of whom featured on the seven-player bench – and the injured Connor Jennings, respectively.

The visitors included among their substitutes goalkeeper Kieran O’Hara – who had turned out once for County in 2015, whilst on loan from Manchester United, and since then been capped a couple of times at senior level for the Republic of Ireland – as well as Newby’s twin brother, Alex.

Colchester, like County, without a League victory but fresh from a single-goal away-win in the League Cup (at Ipswich, in the U’s’ case), fired the first shot of note with half a dozen minutes on the clock, as Marley Marshall-Miranda drilled just wide of the right post from the edge of the box.

The Hatters’ inaugural attempt on goal followed – when a cross from the right by James Brown, making a first League start, found Sarcevic, whose on-target header was caught by Sam Hornby. And the visiting ‘keeper was made to jump a few minutes later to pluck from the air another headed effort – by Southam-Hales on this occasion, following a cross on the left from Ryan Johnson.

With eight minutes of the half remaining, a corner from Sarcevic on the left eventually fell beyond the far upright to Madden, whose close-range, angled snap-shot was parried by Hornby. And five minutes later, Sarcevic half-volleyed wide of the same post from just outside the area.

Having enjoyed much the better share of possession during the first half, the Hatters continued in similar vein upon the start of the second. And from an early corner, delivered by Myles Hippolyte on the right, Johnson and Joe Lewis had shots blocked in quick succession.

A Madden shot was deflected beyond the right post by his captaining counterpart, Luke Chambers – resulting in another corner from Hippolyte that Johnson headed over. And after the hour, two newly-introduced substitutes tried their luck, as Newby unleashed a low shot from the edge of the area for Hornby to smother, before Wootton headed over Brown’s cross from the right.

But Wootton’s next header, midway through the half, put County ahead, as he latched on to Ollie Crankshaw’s cross from the right to glance past the flailing Hornby for his first goal as a Hatter.

The home pressure was maintained, with Madden stinging Hornby’s hands courtesy of an effort from 25 yards, Crankshaw firing wide of the far post from the right of the box, and Hippolyte placing a shot that was blocked by the Colchester ‘keeper. And County then held firm during six minutes of added time to send over 7,500 Hatters home happy.

Man of the Match: Brown.