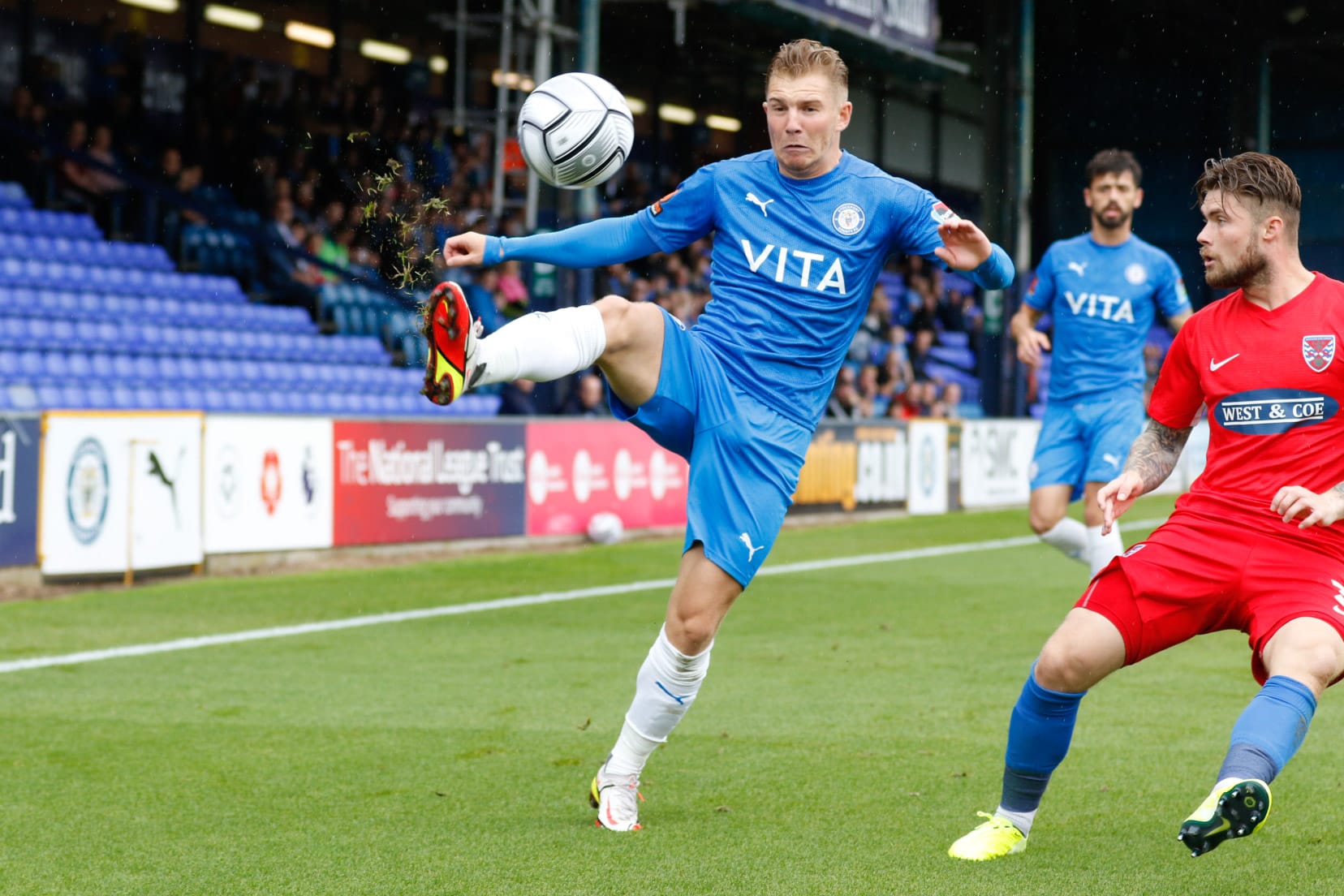 County’s 2021/22 campaign got under way on a day that also saw supporters return to National League matches without attendance restrictions – but over 5,000 fans packing Edgeley Park were ultimately left disappointed following a home reverse against Dagenham & Redbridge.

John Rooney put County ahead early on, before the ‘Daggers’ levelled shortly ahead of half-time and struck twice again in quick succession after the interval to earn a first-ever triumph over the Hatters and inflict upon them a third opening-day defeat running.

On a drizzly afternoon that felt more like Autumn than August, three of the Hatters’ close-season acquisitions – Ben Barclay, Will Fish and Ben Whitfield – were handed their competitive debuts, although striker Scott Quigley missed out on his with a minor hamstring injury.

The afternoon’s, and the season’s, first chance for County fell to Paddy Madden who, with four minutes on the clock, latched on to Whitfield’s through-ball before firing towards goal – only for his shot to be deflected past the left post by defender Will Wright for a corner.

But when Madden turned provider five minutes later, the outcome was better still – with his low cross from the right finding Rooney, whose first time shot fizzed into the far bottom corner of the net to give the Hatters an early lead.

The visitors came close to equalising just after the quarter-hour mark, but Ben Hinchliffe dived low to parry their first attempt – courtesy of perennial County scourge, Paul McCallum – around the left upright. Matt Robinson then tried his luck with a shot from distance that flew wide of the opposite post, Callum Reynolds headed a Wright delivery into the arms of Hinchliffe, and Sam Ling had an effort deflected behind, as the Daggers became sharper.

Four Dagenham corners within eight minutes gave an indication of the contest’s changing momentum, and five minutes before the break the scores were level. Hogan was adjudged to handle the ball just outside the right half of County’s area, and the impressive Wright fired the resulting free-kick past the wall and Hinchliffe to get his side deservedly back on terms.

Another free-kick for the visitors – again taken by Wright – not long after the resumption fell more kindly County’s way, with Hinchliffe punching the delivery away from danger.

But what followed was a frenetic five-minute spell that saw the visiting manager Daryl McMahon booked, following his protests at the game continuing while captain Angelo Balanta lay injured, and two more goals within as many minutes for the Daggers.

Newly-introduced substitute Josh Walker – a close-season signing from Barnet – slotted them ahead, before Robinson headed home a Wright corner from the left to make it three.  Hinchliffe then blocked a shot from Mo Sagaf, who was through on goal, and brilliantly tipped over McCallum’s header to save the Hatters further punishment.

County brought on Ryan Rydel, Alex Reid and Elliot Newby in an attempt to freshen up the attacking effort, but with little more than a Rooney shot over the crossbar and five corners late on to show for it.

Man of the Match: Rooney.