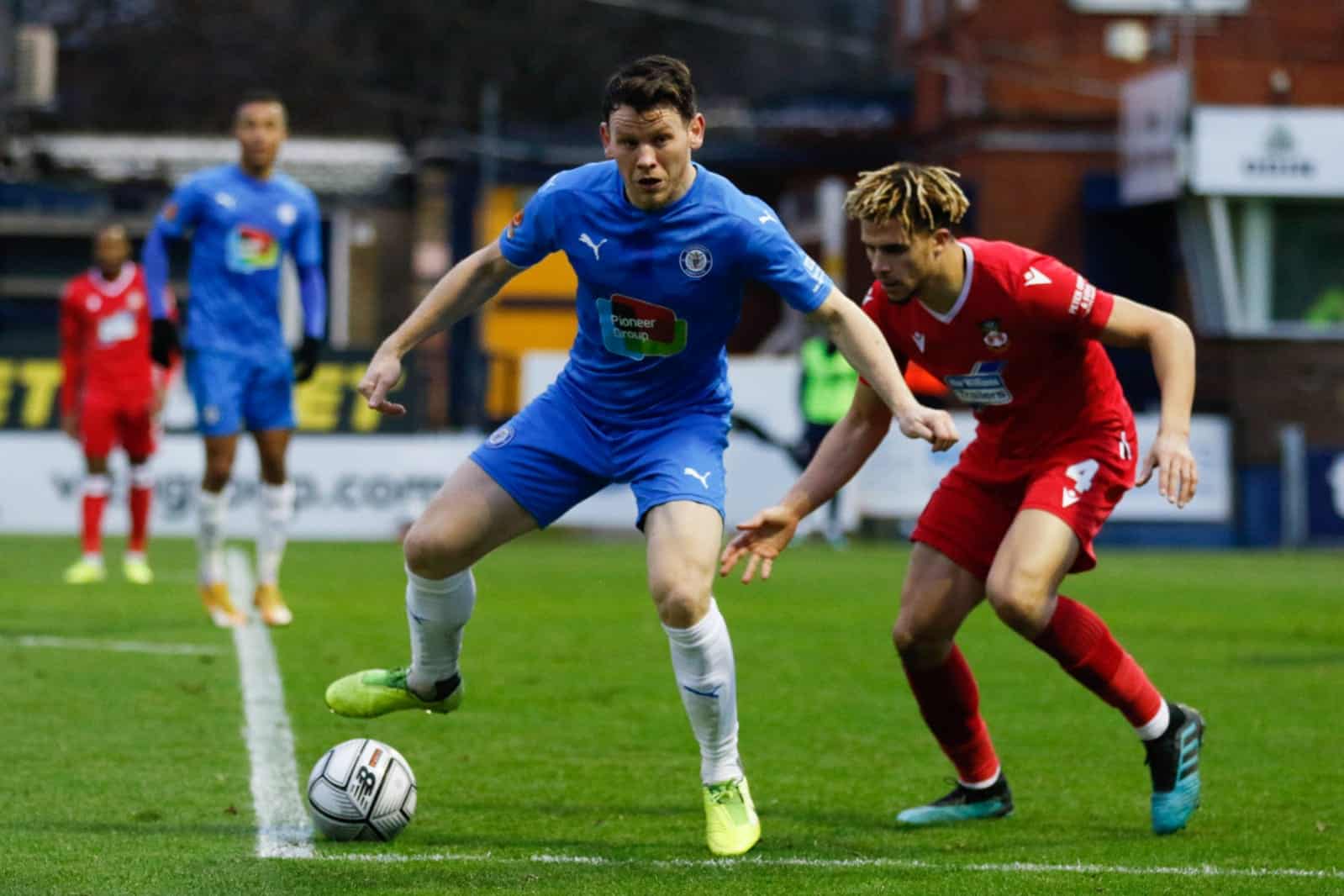 The Hatters’ first National League game at Edgeley Park in over eight weeks, and first home NL meeting with Wrexham for more than eight years, saw them end the calendar year with a welcome return to winning ways and the play-off places.

Early goals from Richie Bennett and Jordan Keane put County in command, and ultimately made sure of the points – in spite of a more spirited performance by the visitors after half-time.

County took to the field on a wintry Bank Holiday afternoon, showing three changes from the side that had earned a point at Altrincham two days previously. Bennett, Macauley Southam-Hales and Jamie Stott were the players to return – replacing Sam Minihan and Jordan Williams, both of whom dropped to the bench, as well as Adam Thomas.

With only two minutes on the clock, Bennett went close to getting his return off to a memorable start – courtesy of a low shot that visiting skipper Shaun Pearson deflected on to the left post. And the striker was denied again nine minutes later, after getting behind the defence – only to be stopped in his tracks by goalkeeper Rob Lainton.

It was, then, a case of third time lucky with a dozen minutes played, when the Hatters’ Number Nine gave them the lead. Southam-Hales, following good work on the right, found one-time ‘Red Dragon’ Connor Jennings, whose lay-off in the area was tapped home by Bennett from close range.

On the quarter-hour mark, County’s advantage was doubled – with Keane rising to meet an in-swinging Southam-Hales corner from the left and glancing in his first goal of the season.

A free-kick on the edge of the Wrexham box, 10 minutes later, was fired up into Railway End orbit by Mark Kitching – who subsequently delivered a corner from the right that Alex Reid, another former Wrexham player, headed just over, as County continued to dominate.

The Red Dragons offered little by way of firepower up front, although did have two claims for penalties waved away by Referee Steven Copeland when Jordan Davies – looking to be outside the area – and Reece Hall-Johnson went to ground under County challenges.

With added time imminent, the Hatters twice went close to netting a third. Another Kitching corner on the right was headed against the crossbar by Reid, before Davies cleared Lois Maynard’s follow-up shot off the line.

Having not enjoyed a scoring chance of which to speak during the first half, the visitors began the second by spurning a golden one after the ball fell to Jordan Ponticelli with only Ben Hinchliffe to beat – but the striker blazed his effort over.

Up the other end, Lainton dived to smother a Reid shot that lacked pace, before Hinchliffe   – called into action for the first time of note – did likewise in keeping out a free-kick from Luke Young.

An even half saw Wrexham keep the Hatters’ defenders rather more on their toes – and only a last-ditch intervention by Liam Hogan, that deflected Young’s shot up on to the bar, saved them with seven minutes remaining.

Reid fired a shot narrowly wide, and Jennings and Bennett both had efforts well saved by Lainton, as County saw out with a smile on the pitch a year best forgotten off it.