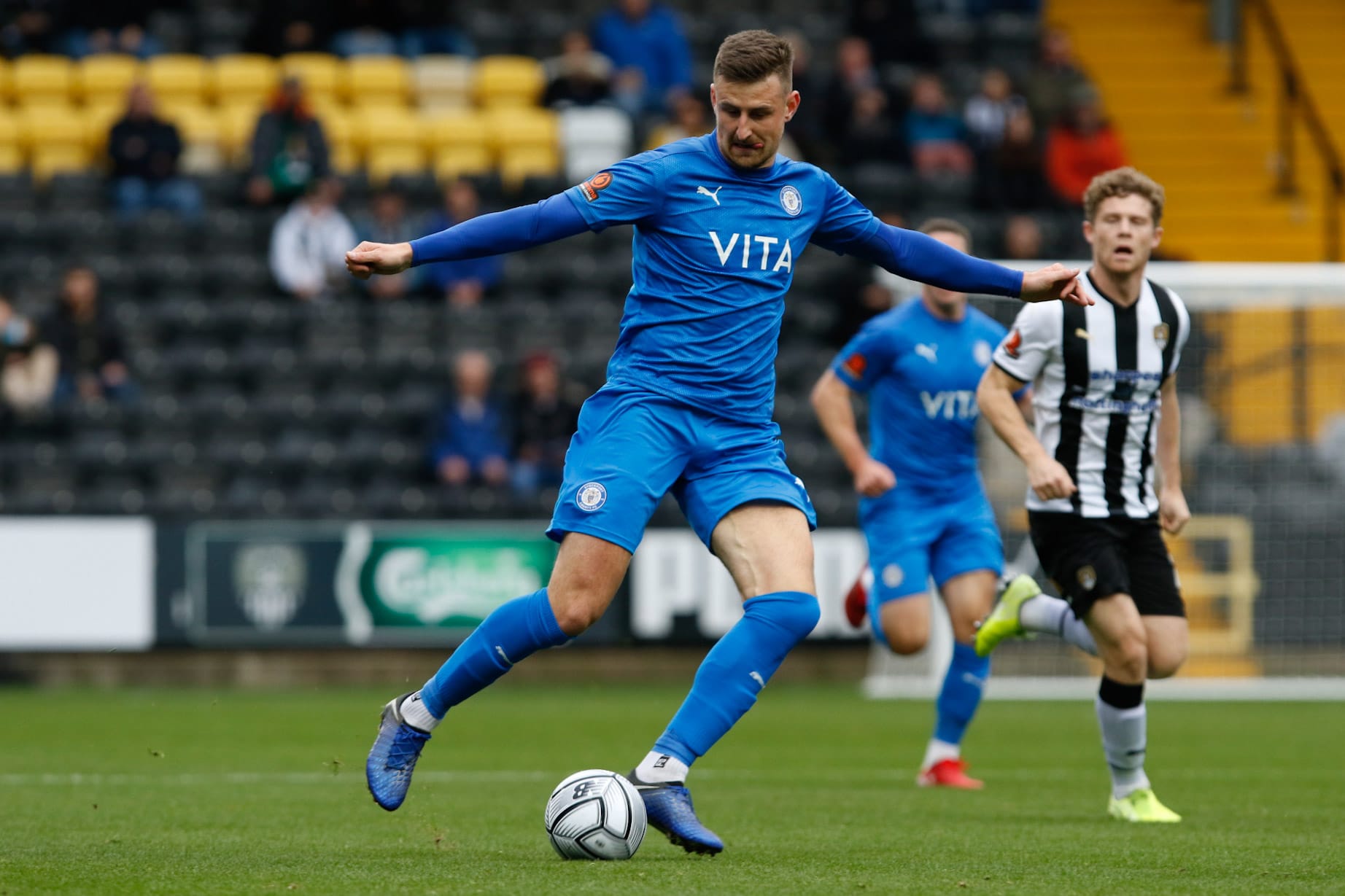 The Hatters, in the wake of their FA and Cheshire Senior Cup successes, resumed National League action in Nottingham, but saw their five-match winning run in all competitions come to an end against the ‘Magpies’ of Notts County.

In front of a 7,000-plus crowd at Meadow Lane, the hosts struck twice within 14 second-half minutes to win the contest of the two ‘Countys’, despite a penalty converted in the dying stages by substitute Ben Whitfield to halve the deficit.

The Hatters showed three changes from the FA Cup starting line-up against Stamford a week earlier. Liam Hogan, Scott Quigley and John Rooney were recalled – replacing, respectively, the injured Zeki Fryers, who was ruled out through injury, Arjan Raikhy and Whitfield. Newly-arrived Hatter Antoni Sarcevic, whose transfer from Bolton had been announced the previous day, was named among the substitutes alongside Whitfield.

With just over five minutes played, the first shot was unleashed – and by Notts, as Frank Vincent’s effort took a deflection over the crossbar. Quigley then drilled wide of the hosts’ right post, and Ruben Rodrigues subsequently did likewise back at the other end.

Ethan Ross was first called into serious action shortly after the quarter-hour mark – diving at full stretch to tip a shot by defender Connell Rawlinson around the right post. But the Hatters went closer still a dozen minutes later, when Hogan’s low goal-bound shot was cleared off the line by counterpart skipper Kyle Cameron, before Paddy Madden’s header on the rebound ended up in the arms of home goalkeeper Anthony Patterson.

Ross again came to the rescue, keeping out Kyle Wootton after the striker had been played through on goal by Rodrigues – and proceeded to make more routine saves when Jim O’Brien and Rodrigues tried their luck with shots from distance.

Sarcevic took his County bow a little earlier than he might have expected – entering the fray five minutes ahead of the break, following an injury to Madden. And the Hatters found time to fashion a couple of further attempts, courtesy of Quigley and Macauley Southam-Hales who both fired over, before Wootton, in added time and at close range, failed to convert Joel Taylor’s cross from the left.

Notts, with that late first-half golden opportunity doubtless on their minds, went on the attack upon the resumption – only for Dion Kelly-Evans to blast high and wide, following Vincent’s cross from the right – before Quigley saw a shot deflected behind at the home end.

But within nine minutes of the re-start the Magpies were ahead – with Wootton atoning for his two earlier missed chances by firing home after being fed by Vincent.

Wootton went close to doubling his and the hosts’ tally on the hour, although his shot from the right was blocked by Jordan Keane and flew into the near side-netting. But the Magpies had their tail feathers up, and within another eight minutes they had a second goal after another through-ball from Rodrigues found Vincent who, on his league debut, finished with composed aplomb.

Rooney fired over from outside the box, and Ollie Crankshaw had a shot deflected behind, as the Hatters sought to reduce the arrears – whilst, at the other end, Ross tipped over Rawlinson’s header after the defender had nodded on Matt Palmer’s corner from the right.

A foul by Rawlinson on Sarcevic deep into added time earned the Hatters a penalty, which Whitfield converted for a late consolation.