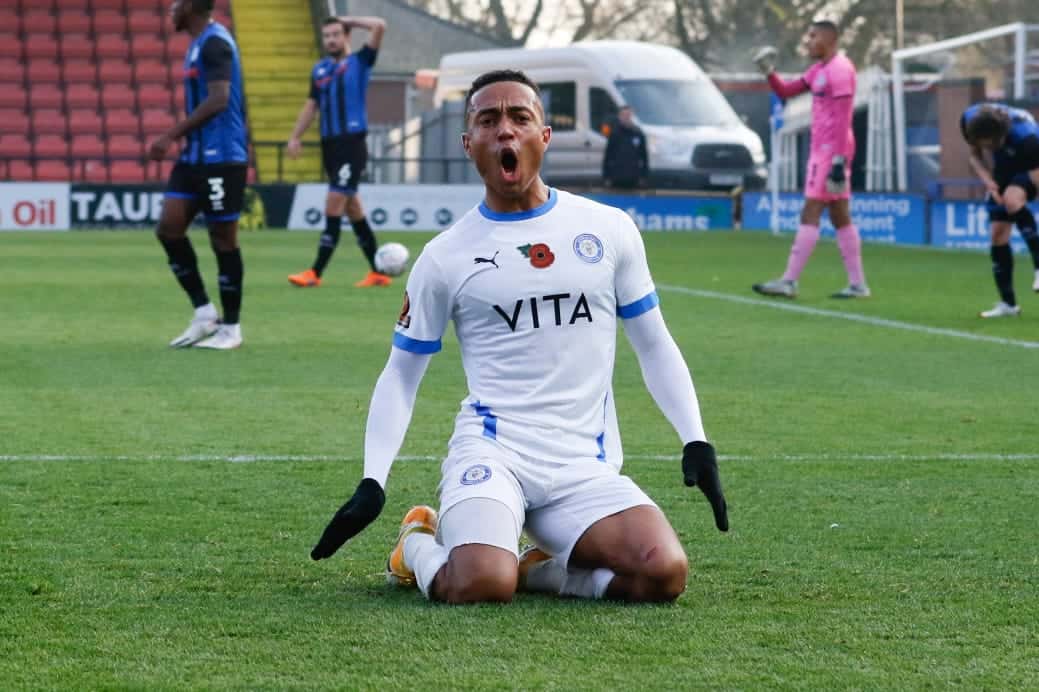 Superb County stunned Rochdale 1-2 at Spotland, to advance to the FA Cup 2nd Round proper – after a first-half stunner by John Rooney from The Hatters’ midfielder’s own half.

Boss Jim Gannon made just one change to the side which swept aside Chesterfield 4-0 in the final qualifying round on Wednesday night, with Mark Kitching returning to replace Richie Bennett, with the County forward self-isolating after coming into contact with a positive Covid-19 case.

The Hatters started brightly against their League One hosts – who started the day 34 league positions above Gannon’s men, and County soon had a deserved lead through a quite remarkable goal.

John Rooney dispossessed Jimmy Ryan inside the County half, before advancing to a position just shy of the halfway line and producing an exquisite lob over ‘Dale stopper Gavin Bazunu.

And, with County in dreamland after a flying start, things got even better time inside fifteen minutes when Alex Reid pounced to turn home Connor Jennings’ low cross-shot.

County had made all the early running, with Kitching again threatening down the left and crossing for Connor Jennings to skew wide of the post – but Brian Barry Murphy’s side stepped things up soon after, and gave themselves a lifeline just after the twenty minute mark.

Former Chorley man Alex Newby skipped down the right and stood up a cross for Matty Lund to head home at the back post to half the deficit for the hosts, but County stood firm and made it into the half-time interval with their lead intact.

Gannon’s side resumed for the second half without any changes being made at half-time – and despite an early drive by Kitching held well by Bazunu, Rochdale soon settled into a sustained spell of possession.

Chances began to follow for the hosts, only to be met by a superb rearguard action by County – with Jamie Stott, Liam Hogan and Ash Palmer meeting almost every Rochdale cross to head clear.

Ben Hinchliffe also produced a number of stunning second-half saved to keep Rochdale at bay, the best of which came in the final minute of normal time when the former Fylde stopper dived low to palm away Ollie Rathbone’s seemingly goal-bound strike.

Three minutes of stoppage time were seen out heroically by The Hatters, who now go into the hat for Monday evening’s 2nd Round draw.