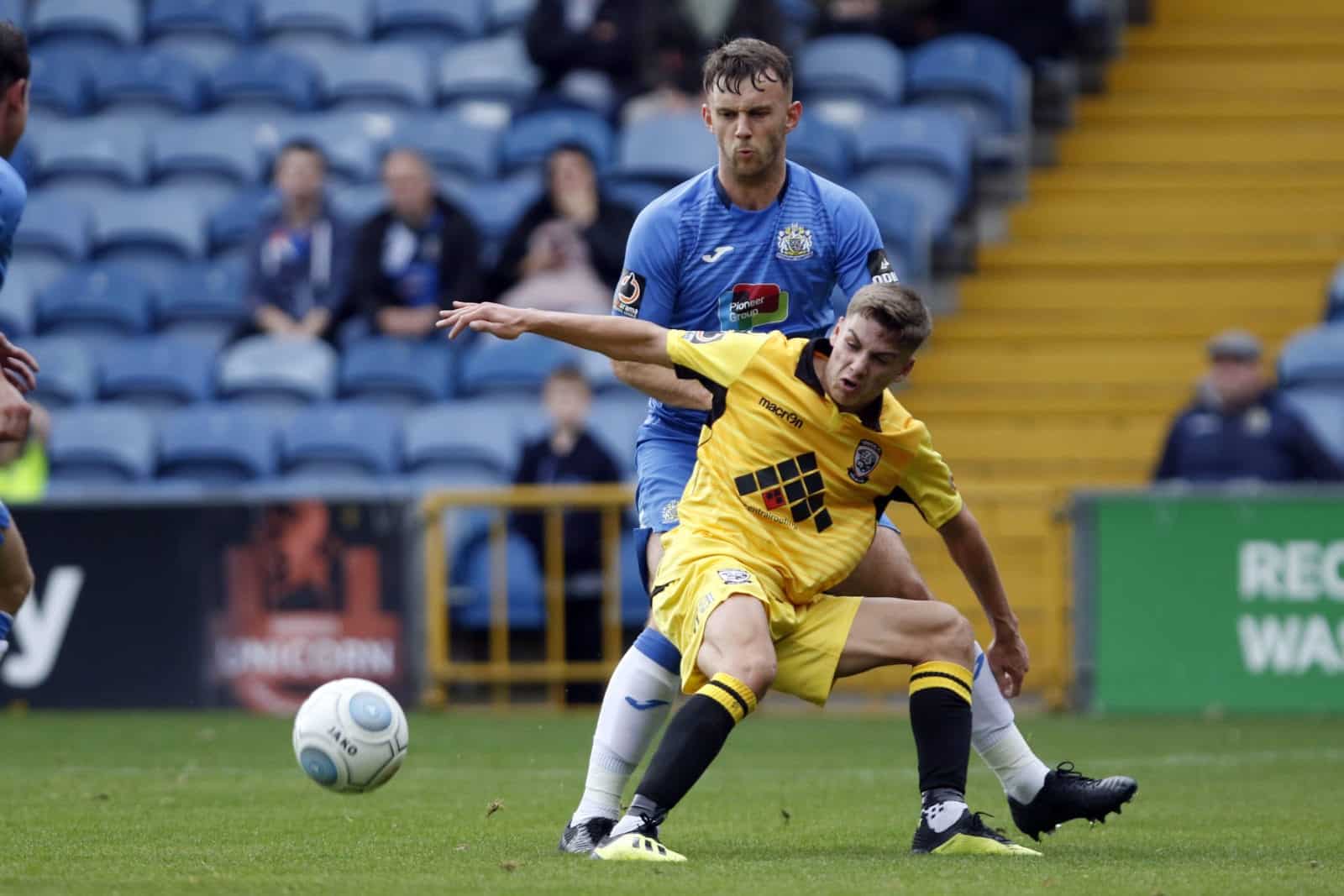 Mulhern Steers Home From The Spot To Break Bull-ish Resistance

The Hatters returned to National League North action at Edgeley Park for the first time in five weeks, and extended their unbeaten run in all competitions to as many games – but will be disappointed not to have claimed all three points in a match they largely dominated.

Instead, they had to settle for a share of the spoils against the visiting ‘Bulls’ from Hereford – and, even then, could have finished the contest empty-handed but for Frank Mulhern’s equalising penalty 10 minutes before the end. 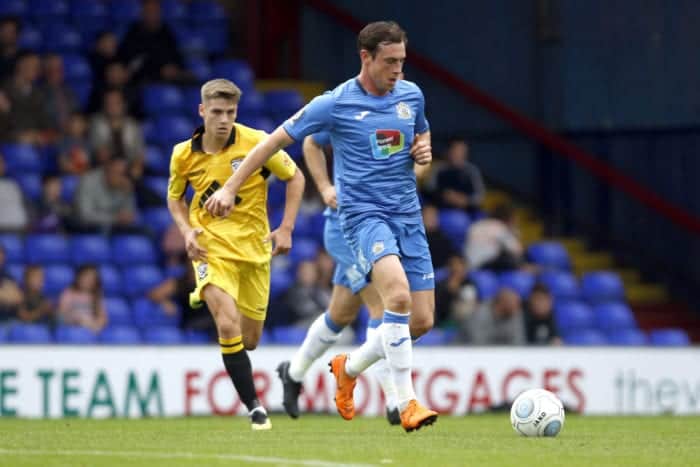 County took to the field on a blustery, autumnal afternoon in a 4-2-3-1 formation, and showing two changes from the FA Cup starting line-up against Corby a week previously. Both goal-scorers in the Corby tie – namely, Mulhern and Matty Warburton – were handed starts, replacing Jordan Keane, who was still suffering from a hamstring injury sustained in that match, and Nyal Bell.

Just as the sun began to reappear from behind the clouds brought by Storm Callum, the Hatters started off with plenty of brightness about them. Ash Palmer headed an early corner just wide of the right post, before Darren Stephenson went even closer with a header from an Adam Thomas cross that goalkeeper Matt Yates, making his debut on loan from Derby, parried behind. 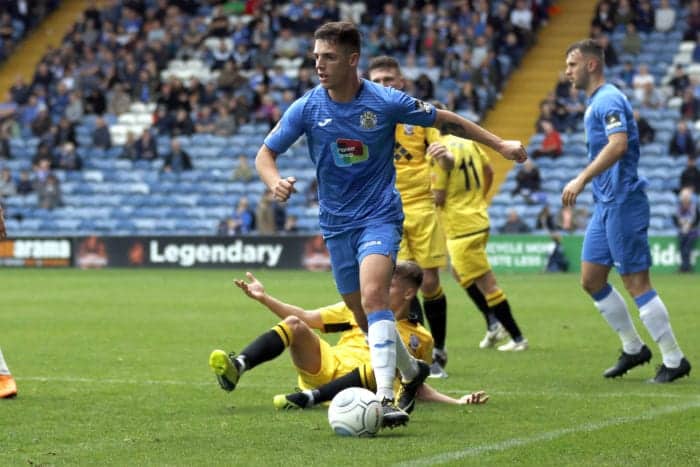 Yates also stooped to smother a low free-kick by Sam Walker from 25 yards out – and shortly afterwards had cause to be thankful to defender Danny Greenslade, whose outstretched leg took the ball away from Warburton after County’s Number 10 had been played through by Mulhern.

Hereford, deploying five in defence, offered relatively little in attack – with crosses from the left and right by, respectively, Greenslade and Kieran Thomas flying wide. And another visiting loanee, Cheltenham’s George Lloyd, was denied by the joint efforts of Ben Hinchliffe and Scott Duxbury.

Ten minutes ahead of the break, Warburton weaved his way into the Bulls’ box – skipping past a couple of challenges in the process – but the eventual shot, from an angle, was blocked by Yates.

Within a minute of the re-start, County earned a free-kick to the right of Hereford’s area that was taken by Walker and, following a brief pinball routine, cleared upfield by Calvin Dinsley. 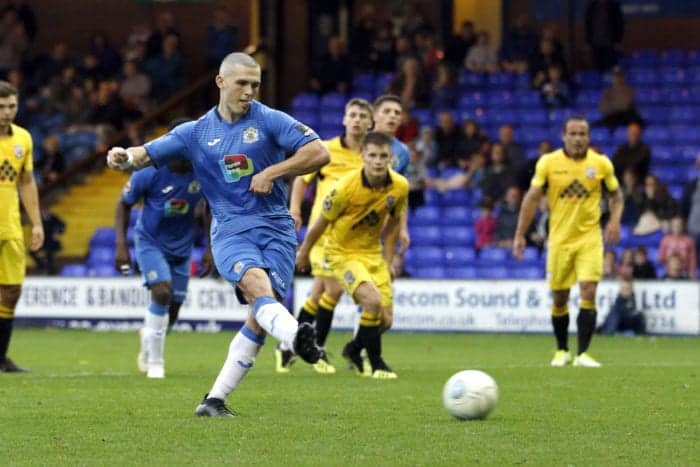 Just six minutes later, the visitors – without an attempt on goal to their name – made a similarly-positioned set-piece count, when skipper Harvey Smith jumped as proficiently as his show-jumping namesake and headed in Eliot Richards’ delivery from the left to give Hereford the lead.

The visitors proceeded to defend in even greater numbers, as much of the remainder of play was concentrated in their half. But, for all County’s possession, a cutting-edge was still needed in the final third, with several corners and free-kicks coming and going without a decisive final touch. 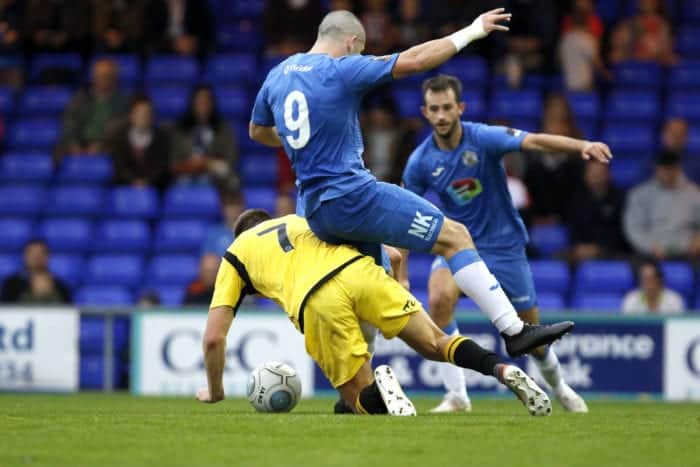 With 80 minutes played, the Hatters were thrown a lifeline courtesy of another dead-ball situation – after Stephenson’s cross from the left was handled by Billy Murphy, and Referee Aaron Jackson pointed to the spot. Mulhern stepped up, slotted his kick down the middle as Yates dived right, and a County penalty was successfully converted for the first time in nearly nine months.

More importantly, it had drawn the Hatters level. But try as they might to take the game by the horns in the closing stages, they were unable to hit the Bulls-eye for a second time.