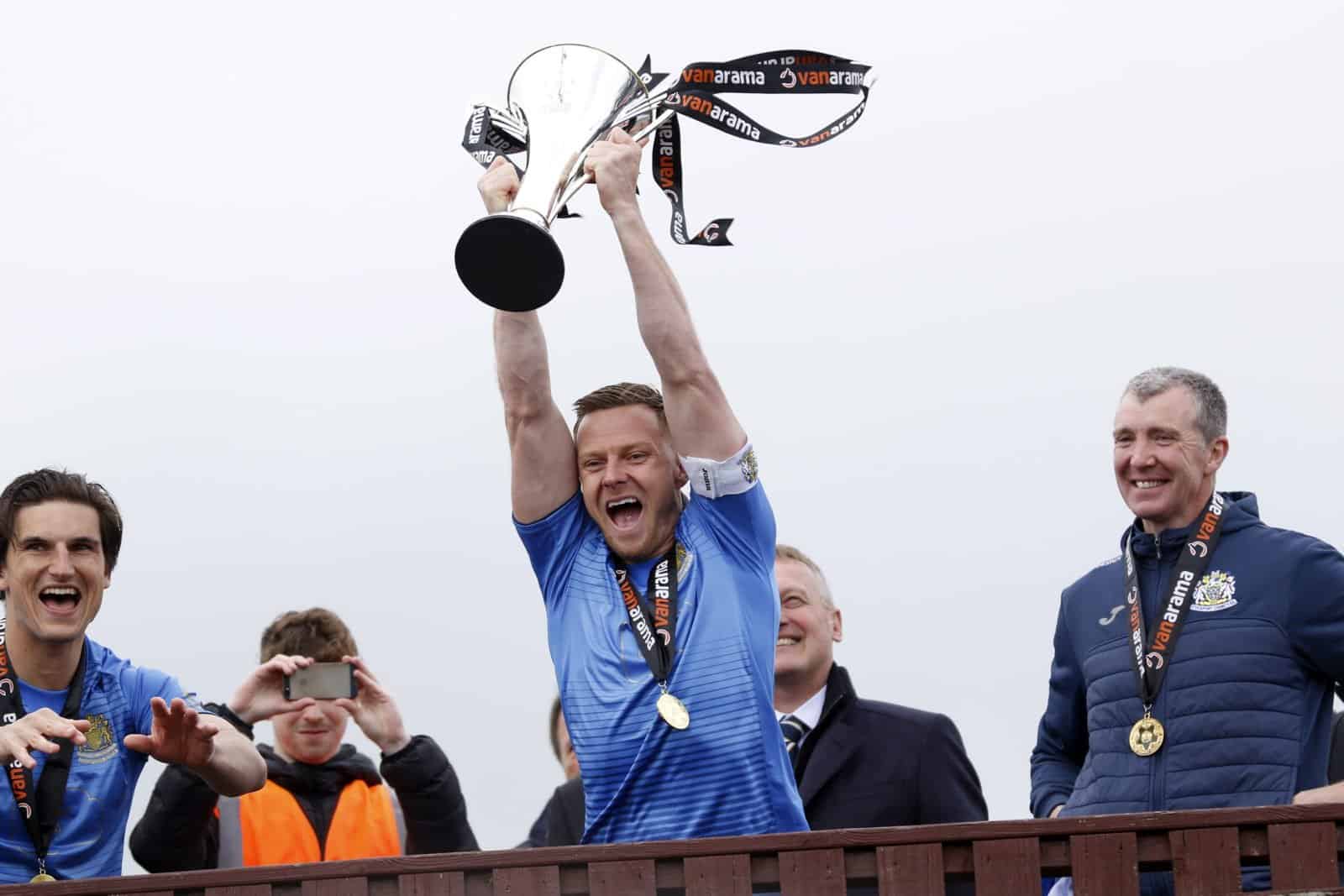 In a match blighted by strong winds from Storm Hannah, Ash Palmer, Matty Warburton and Adam Thomas scored the goals against relegated ‘Boro’ to secure the club’s first title in 52 years by one point from second-placed Chorley, and at a packed Liberty Way, which enjoyed a new record of 4,000-plus attendees – some 85% of whom were travelling Hatters.

The Hatters took to the field surrounded by flag-waving Twelfth Man Representatives on all four sides, and in a 4-2-3-1 formation that featured two changes from the starting line-up at Edgeley Park against Curzon Ashton five days earlier. Sam Minihan and Jordan Keane replaced Elliot Osborne and Jamie Stott – with midfielder Keane dropping into central defence to fill the gap left by Stott, following the young loanee’s recent return to parent club Oldham Athletic.

County played with the wind during a first 45 minutes in which incursions over the halfway-line by basement side Nuneaton were rare. But for all their pressure, the Hatters were also hampered by the gusty conditions when creating early opportunities in front of goal – as Thomas found when he unleashed a sixth-minute shot that swirled high and wide.

Thomas and Palmer each headed a Paul Turnbull corner from the left wide of the far post – before Scott Duxbury, with 16 minutes played, cut in from the left to test home goalkeeper and captain Cam Belford, who parried the left-back’s low shot around the near upright.

Turnbull saw a well-struck effort deflected behind, Minihan fired into the right side-netting, Frank Mulhern drilled wide of the left post, Palmer’s head powered another Turnbull corner just beyond the same upright, and Sam Walker’s wind-assisted free-kick from distance was only narrowly off-target – as was a shot by Jake Kirby from closer range that followed a deep delivery from Turnbull.

Ten minutes of the half remained, with the prospect of playing another 45 with the wind against them, as the Hatters earned three further corners in quick succession. And from the third of those – taken by Walker on the left – County went ahead, as Palmer bundled the ball inside the far post.

The advantage was doubled in added time when leading scorer Matty Warburton raced into the box and struck a venomous shot past the flailing Belford for his 27th goal in all competitions.

The relief after Warburton’s goal had gone in was palpable – although any fears that the Hatters would struggle with the wind in their faces after the break were quickly dispelled, as they earned an early second-half corner and, shortly afterwards, Turnbull volleyed just wide of the left post.

The hosts, inevitably, ventured a little more often into County’s half, and fashioned some opportunities of their own, as Ryan Edmunds headed beyond the right post and Devon Kelly-Evans skied over after weaving his way into the box.

But County continued to look the side most likely to net – and Palmer almost scored his second of the afternoon from a Walker corner, courtesy of a shot that grazed the left post.

With 12 minutes left, the game – and, to all intents and purposes, the title – became safe and secure, when Kirby knocked down Warburton’s flick to volley home his eighth goal of the season.

And that – save for a cameo appearance in attack by reserve Boro ‘keeper Ty Belford, and Ben Hinchliffe’s added-time block of James Caton’s shot to preserve a clean sheet – was pretty much that. The full-time whistle signalled a mass outpouring of joy from happy Hatters, ahead of the eventual presentation to the champions of their trophy, and a triumphant return to SK3 for the end-of-season awards to round off a memorable and momentous day in the history of our club.

One that will next term compete, after six years away, in the National League!

Attendance; 4,054 (3,450 representing The Twelfth Man – with grateful thanks to ‘Boro’ for accommodating so many of us!).