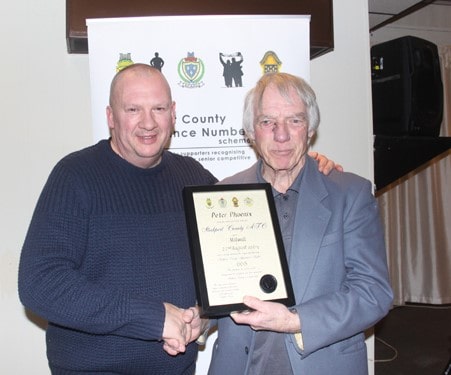 Everyone at Stockport County is deeply saddened to hear of the death of our former player Peter Phoenix. Peter passed away recently at the age of 83.

Born in Urmston, he was a former Stretford Boys player, appearing for Manchester City and Stoke City as a youngster. He dropped into non league with Tamworth before being signed by Oldham Athletic as a 21 year old amateur in February 1958. The Latics were to give him his League debut in the same month and he went on to make 178 League and Cup appearances at Boundary Park.

He then moved to Rochdale and Exeter, before moving back north to join Southport in January 1964. He made his debut for The Sandgrounders at Edgeley Park in the same month.

Peter joined the Hatters in July 1964, to help bolster a young squad being assembled by Trevor Porteous. In what was to become one of the most memorable seasons in County’s history, hopes were high at the start of the season and Peter made his debut on the opening day as County hosted Millwall (who were to finish the season in second place). The 4-1 defeat set the standard for a disastrous league campaign that was to see the Hatters finish in 92nd place in the Football League, for the first time in the club’s history.

Whilst the team struggled to win a league game, Porteous led his team to a remarkable FA Cup run, which saw County reach the 4th Round, where they memorably held League champions Liverpool to a one-all draw at Anfield, in front of nearly 52,000 supporters (the largest ever crowd for a County game).

With County rooted to the bottom of the Football League, Liverpool were expected to win easily (Bill Shankly famously deciding not to attend the game, instead going to Cologne, to see Liverpool’s future European Cup opponents), but were shocked as County took the lead through a Len White header. A late equalizer saved Liverpool’s blushes but Peter was to forever recount the fact that history might have been so different, with County pushing for a winner, his last minute shot shaved the Liverpool post.

Liverpool would win the replay 2-0 at Edgeley with both goals scored by World Cup winner Roger Hunt. This was to prove to be Peter’s last game for the Hatters. He had been considered an injury doubt for the replay and was to miss a number of games with a recurring groin injury. In the interim, County signed Tommy Roberts from Everton and he was unable to regain his place in the team. In total he made 25 League and Cup appearances for County scoring one goal.

Peter left Edgeley Park in the summer of 1965, to join Wigan Athletic, and continued to play for a number of non League sides including Witton Albion, Altrincham and Bangor City.

He continued to live locally and we were delighted to welcome him back to Edgeley Park in 2015, for the 50th anniversary reunion of this special County team. We were proud to present him with his Stockport County Appearance Number certificate  – 668. A generation of County supporters first came to Edgeley Park as a result of that FA Cup run, and Peter is very fondly remembered by many people. His place in County history is ensured forever and we will not forget him.