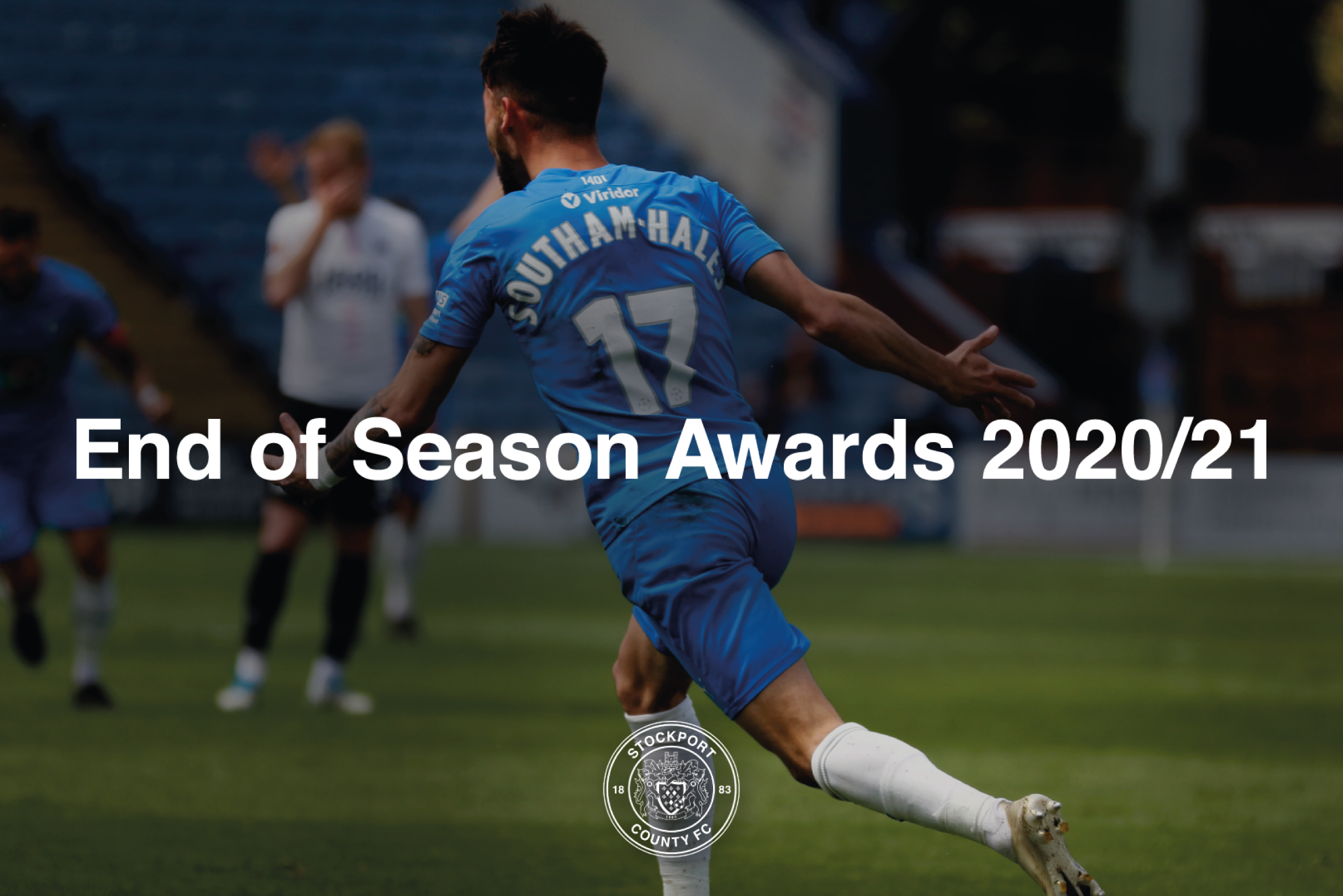 The winners of the Stockport County Player of the Year awards for the 2020/21 season have now been revealed, with Club Captain Liam Hogan picking up the main award after being voted as the Men’s Player of the Year in his first full season at Edgeley Park.

In an event held at Carrington last week hosted by Club President Steve Bellis, a total of nine awards were handed out through the Academy team, Ladies side and Men’s first team.

See below for the full list of winners, after another unforgettable season of football at Edgeley Park:

There were three Academy awards up for grabs this year, with 1st Year Josh Edwards and 2nd Year Zack Clarke both being voted as winners by their teammates, after enjoying successive seasons in their respective sides. Unfortunately due to other commitments, neither player were able to attend on the day, with the awards to be presented to them at a later date.

The winner of the Stockport County Academy Scholar of the Year trophy, a new award this season, was chosen by Academy Manager Damien Allen – with Jack Hinchy picking up the award after a big season for the 18-year-old. The midfielder memorably his first-team debut for the Club in our FA Cup Third Round tie against Premier League West Ham, coming off the bench late on, before signing his first pro-contract with the Club just a month later, training with the first team on numerous occasions throughout the season.

Ladies’ Manager Ronnie Green: “Since arriving at the club last summer, Fran really hit the ground running. She slotted straight into the Captain’s role, directing play from her centre-back position. A natural leader, she has been a commanding presence at the centre of our defence this season. Her great pace and ability to time crucial tackles, make her a stand-out performer. Add to this the fact that you can guarantee she will give 100% every game, make her our SCLFC Manager’s Player of the Season.

“Fran is taking time out from football at the moment as she and her partner, Jerome, are expecting their first baby in November. We wish them all well and look forward to her return next season.”

Chosen by the Stockport County Appearance Numbers (SCAN) scheme, the first Young Player of the Year award was presented to Harry Cardwell after an impressive loan spell from Chorley. Joining the Club in February alongside teammate Elliot Newby, the Scot has had a big impact during his time at Edgeley Park, scoring five goals and registering four assists in 18 appearances to date, and impressing with his hold-up play.

On now to one of the more straightforward awards of the evening. In an incredible season of outrageous goals for County, there were an unprecedented 13 strikes for supporters to choose from, with seven of them coming from one man in particular.

There could only be one winner though – with John Rooney’s incredible long range goal against Rochdale in teh FA Cup First Round the overwhelming winner. Winning the ball back just inside his own half, Rooney looked up and lofted the most exquisite lob over goalkeeper Gavin Bazunu’s head from 60 yards to put us in front at Spotland – a worthy winner, and one that will surely never be forgotten.

For the first time in the award’s history, the Players’ Player of the Year Award was shared between two players, as Ryan Croasdale and Ben Hinchliffe both being recognised by their teammates for their stellar contributions throughout the season.

It caps a sensational first year at Edgeley Park for Ryan, who joined the Club from AFC Fylde in the Summer, with his tireless driving displays in midfield proving a key factor in our promotion push over the course of the season, playing 41 games; he also grabbed his first goal for the Club recently in a 4-0 win over Wealdstone at Edgeley Park.

For Ben, this is his first time picking up the award in his five seasons at the Club, rounding off a remarkable campaign for the 33-year-old that saw him play every minute of the league season, pass the 200 game mark for the Club, and keep more clean sheets than any other ‘keeper in the National League with 19 (and counting).

The final award of the evening went to the Captain, after Liam Hogan was voted by the County fans as their Player of the Year for 2020/21.

First signing for the Club in February 2020 from Salford City, it’s been an impressive first full season at Edgeley Park for Liam, making 45 appearances, scoring twice and helping County to the best defensive record in the National League – conceding just 32 goals in our 42 league games.

A constant in the side in both a back three and a back four, Hoges was rewarded for his immense contribution this season by taking home the main prize of the evening, fighting off fierce competition to emerge as the fans’ favourite in a season that could yet prove to be an unforgettable one for everyone associated with the Club.