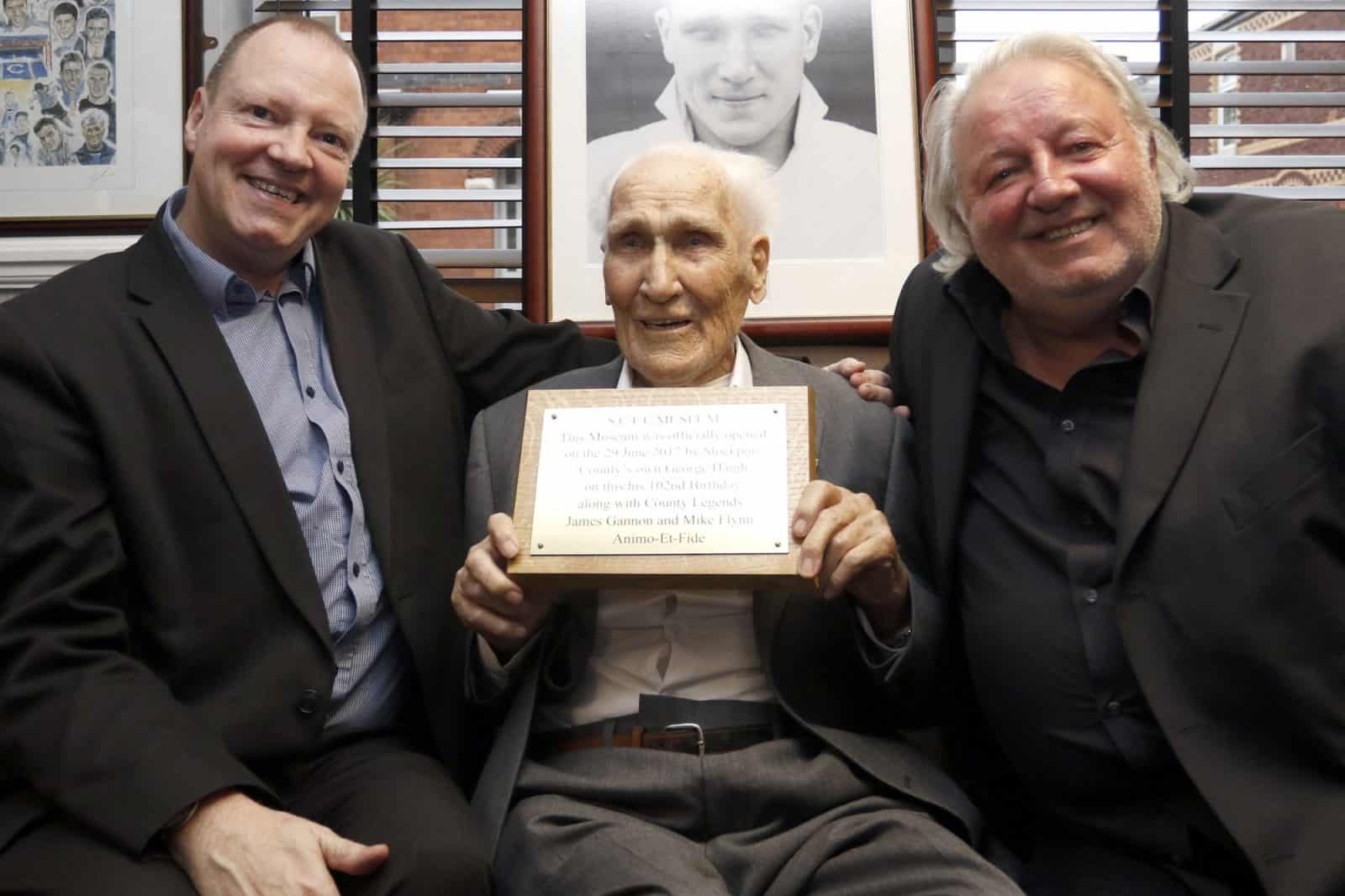 The ex-RAF man is one of the oldest surviving professional footballers in the world, having made his pro debut for the Hatters in 1936.

George said: “The Museum is wonderful and I can’t speak highly enough about Stockport County, the volunteers and the way the club is being run now. The Museum will attract youngsters to the club, which can only be a good thing.”

George was born June 29, 1915 in Reddish, Stockport. He left school in 1929 and signed for Manchester City as an amateur, working in a dying and bleaching factory alongside playing football, and he became great friends with team mate and England international goalkeeper Frank Swift, who died following the Munich air disaster, an incident which George says ‘broke my heart’. 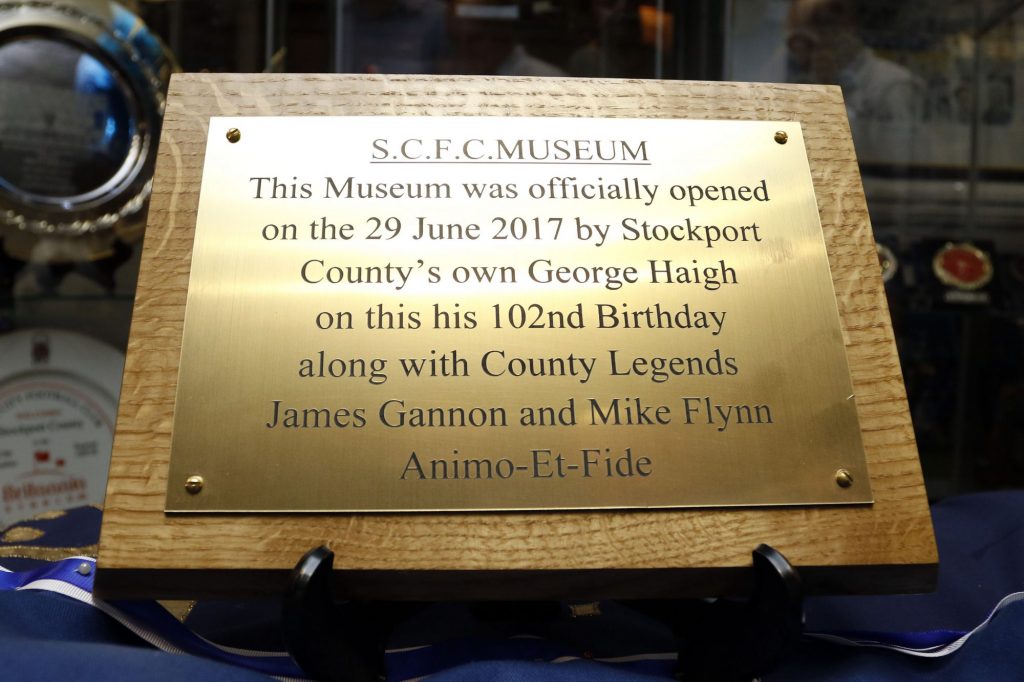 George signed his first professional contract with County and earned £5.50 per week (about £270 per week by today’s money). Great grandfather George also met his wife Ruth, to whom he was married for 61 years, when he was playing for the Hatters and travelling to matches at Edgeley Park on the tram.

He played for County until 1939 when the War effectively ended his pro career – he joined the RAF as a PT instructor and was initially posted to RAF Morecambe, where he trained new recruits and parachutists, still playing football at weekends.

George said: “The war definitely curtailed  my career and it really intervened with everything as far as professional football was concerned.  As soon as war broke out, all contracts were cancelled and that made it very difficult because most of the players then had nowhere to go, so that’s when I decide to join the Air Force as a physical training instructor.

“There were two of us, I worked with Jock Dodds who was a Scottish international centre forward at the time and we were together for about eight or nine months and we got on very well working together in the Air Force. 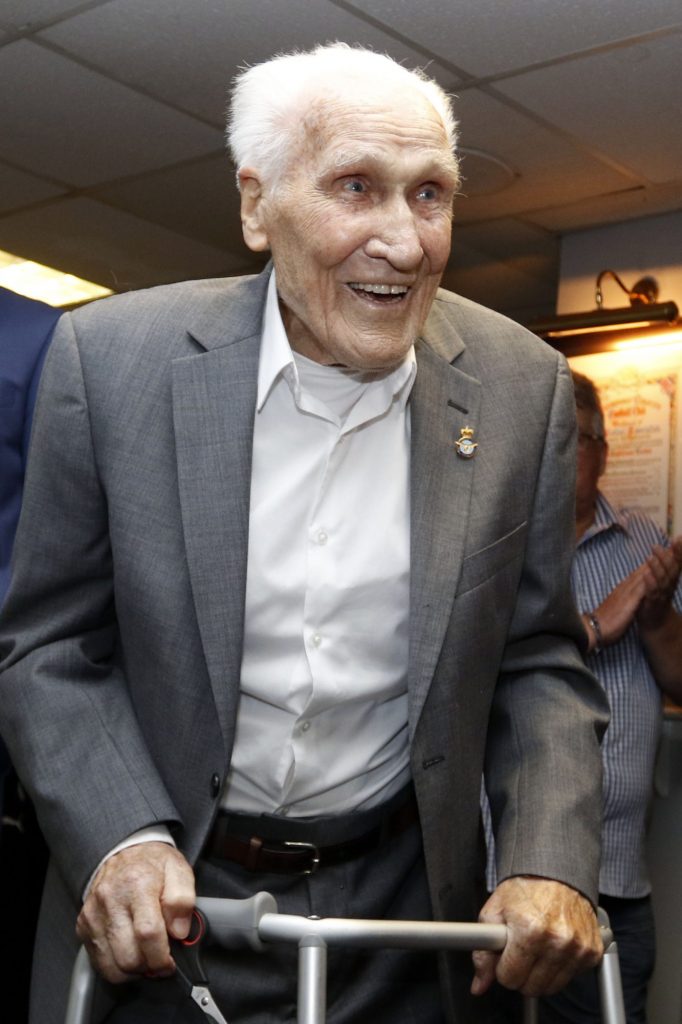 “But County have always been a good club – when I was here they won promotion to the second division which was wonderful, and they were a force to be reckoned with.

“But I moved on and the RAF allowed me to keep playing football whilst I was stationed at RAF Morecambe, so I played for Morecambe FC for two years before moving to Rochdale with some friends of mine who were also PT instructors.

“When I joined Rochdale, I was switched from my normal position of centre half to left half, so I asked the manager why he’d done that and he explained that they were going to be playing a few games against Blackpool, and he wanted me to mark someone called Stanley Matthews!

“It was weird, because the crowd used to get at you – ‘tackle him, tackle him!’ They didn’t realise that once you dived in and tackled Matthews, he’d gone , he was very clever. And he played until he was 50 years old, and was still a fantastic player even then.”  George was playing against Matthews some ten years before the famous Matthews Cup Final of 1953.

After being discharged as a sergeant in 1946 George returned to football as war came to an end, signing for Lancaster Town who agreed to teach him a trade as an engineer – he ended his football career as player-manager at Rossendale United.

But George has little time for the prima donna footballers of today – with a twinkle in his eye he said: “I would’ve found it easy playing today, centre half would’ve been dead easy for me knowing what I know now, I’d have been an international!  And the equipment is so much better – the boots were so heavy in my day, especially when it was wet.  In the modern era, David Beckham is probably the one who stands out, I’d like to have taken him on.”

George is still a keen fan and attends several matches every year – he also sponsors the Young Player of the Year award at Stockport County – he said: “I give a trophy to the Young Player of the Year every season, and I am pleased to hear Sam Minihan (this year’s winner) is staying on for another two years, because the club needs to develop young players and bring them through.”

And what’s the secret to a long life? George says it’s simple: “There is no secret to old age – it’s all in the mind, it’s what you think, if you think you’re young enough to do what you’re doing then keep doing it. It’s good being 102, I feel good, it’s all in the mind as far as age is concerned, you’re as old as you feel.”

The museum at Edgeley Park has been created thanks to the efforts of a group of volunteers working on behalf of the club.

County’s Legends Lounge will be open to visitors, including school parties, to enjoy displays of memorabilia and artefacts from the club’s long and proud history. It was officially launched last night by fans’ group Help the Hatters, who have spent several months redecorating and refurbishing the Legends Lounge to create the new facility.

County Chairman Richard Park said: “We are so grateful to Help the Hatters for their efforts in giving the Legends Lounge a new lease of life, and we cannot think of any better way to make this space available to as many people as possible. We look forward to welcoming County supporters, local residents and fans of other clubs into Edgeley Park to see the Museum.  We’re particularly pleased to be able to host school tours, with the help of our Community Foundation team, as the youngsters who come to see us could well be the fans of the future.”

Help the Hatters Chairman John Fitzpatrick said: “Our team of volunteers has done a magnificent job converting the Legends Lounge, and we’re so excited at the prospect of welcoming visitors into the ground to immerse themselves in the proud history of our football club.”