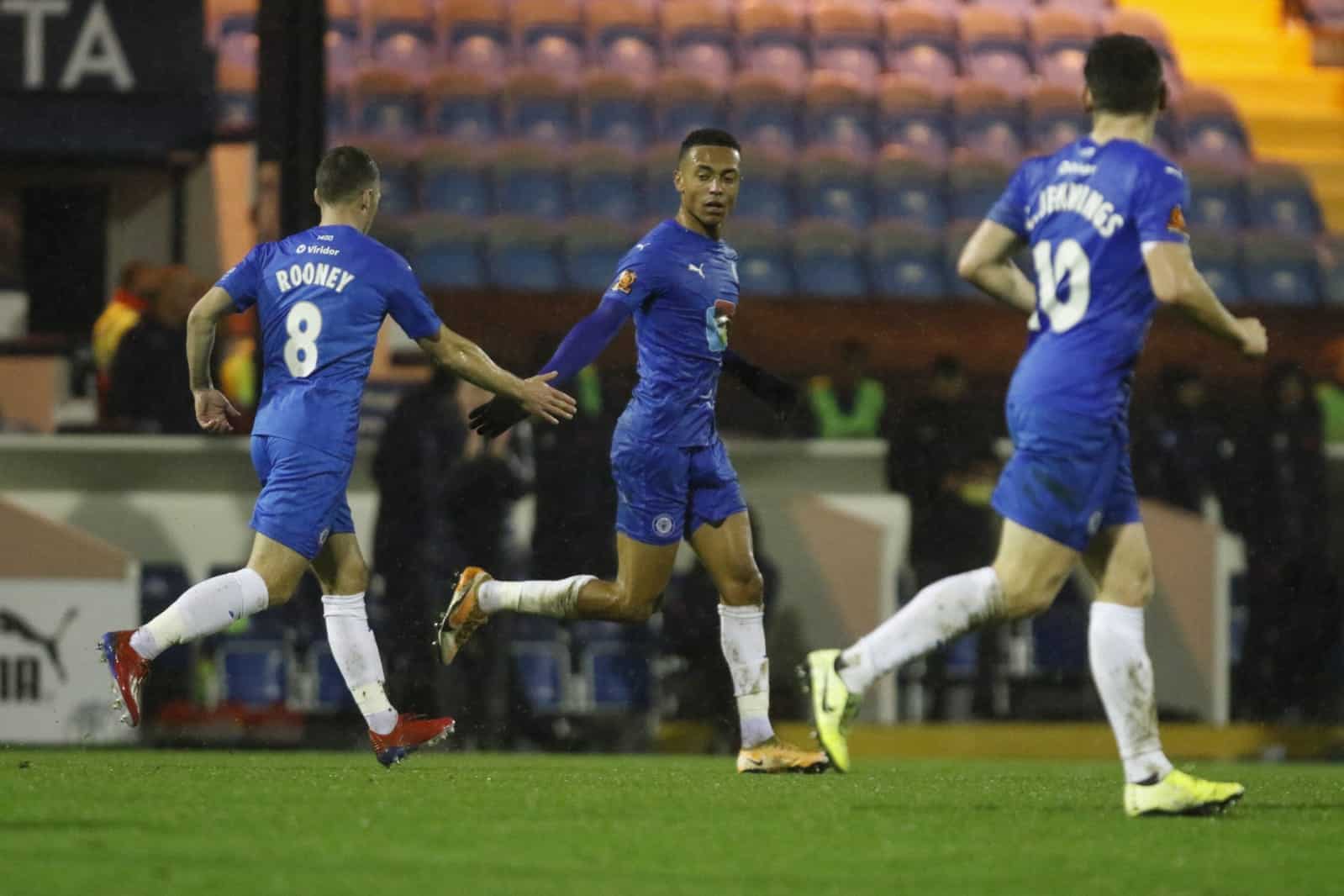 The Hatters returned to Edgeley Park for the first time in almost three weeks to begin their FA Trophy quest against Guiseley – and booked a place in the Fourth Round after coming from behind to triumph, as well as securing a first-ever competitive success in seven attempts, over the National League North visitors, who played much of the second half with 10 men.

Alex Reid could even afford to miss a penalty, before bagging a brace – and substitute John Rooney added a third at the death, as a much-changed County side went through into Monday’s draw.

On a balmy, as opposed to a bleak, mid-winter afternoon, the Christmas bells of change were well and truly rung as County took to the field in the unexpected sunshine showing seven alterations from the starting line-up at Notts County in the National League four days earlier.

Goalkeeper Josh Barnes and midfielder Harvey Gilmour were handed their competitive debuts, while on-loan striker Louis Britton made his first start in a County shirt. Ryan Croasdale, Connor Jennings, Macauley Southam-Hales and Jamie Stott were all recalled – and the seven substitutes permitted for the competition included Academy player Jack Hinchy, as well as half a dozen of the starters from Tuesday evening in Nottingham. With regular skipper Liam Hogan among those, Ash Palmer wore the Captain’s armband against his former club.

Guiseley, meanwhile, featured ex-Hatter Kaine Felix in attack – while the visitors’ bench had an appropriately festive feel about it, through the inclusion of Gabriel Johnson and Miracle Okafor.

With 10 minutes of the tie played, the ‘Lions’ were the first of the teams to show their claws in the final third by forcing three corners in quick succession. From the first of them, skipper Hamza Bencherif’s header was deflected narrowly wide by way of the game’s opening chance.

County went closer – and twice – after another 10, when Britton headed Southam-Hales’ free-kick from the left against the far post, and a follow-up shot from Palmer was cleared off the line by Jonathan Wafula.

Gilmour, showing some deft touches in midfield, threaded a through-ball to Jennings ahead of the half-hour mark – only for the latter’s attempt on goal to be blocked by Andrai Jones. And, shortly afterwards, Jennings was denied by goalkeeper Brad Wade, who kept out his close-range effort in front of the far upright following another Southam-Hales free-kick on the left.

Ten minutes of the half remained when the visitors took the lead, as Wafula capitalised on a moment’s hesitation by Barnes to slide in and convert a through-ball under the debutant keeper.

Twilight was upon SK3, and rain had begun to fall, as the teams re-emerged – and within 10 minutes of the resumption the Hatters were handed a potential lifeline from 12 yards, when Reid was brought down in the away area by Bencherif, who was promptly red-carded. Referee Smith, also without hesitation, pointed to the spot – but Reid, having dusted himself down to take the penalty, blasted it high and wide of the goal’s left side to leave County still trailing.

The Hatters continued to press – and, with their new-found numerical advantage, began to enjoy much the greater share of possession and opportunities. Britton went close with two headers – glancing the first narrowly over, and seeing his second parried behind by Wade, after connecting with respective crosses from the left by Southam-Hales and Kitching. And Wade did well to block from Reid, after the striker had been played through on goal.

Jennings then saw an effort deflected past the right post by Brad Nicholson – but from the resulting corner, taken by the newly-introduced Rooney, Reid made amends for his earlier spot-kick miss, as he headed home to get County back on terms with 13 minutes left.

Croasdale was frustrated by George Cantrill’s goal-line clearance – before Reid, within four minutes of having equalised, cut through on the right to squeeze the ball inside the near upright for his and the Hatters’ second.

Rooney, another former Lion, put the icing on the cake with added time beginning, courtesy of a fine, first-time strike from just inside the box that flew past Wade and into the top right-hand corner of the net.

Man of the Match: Kitching.