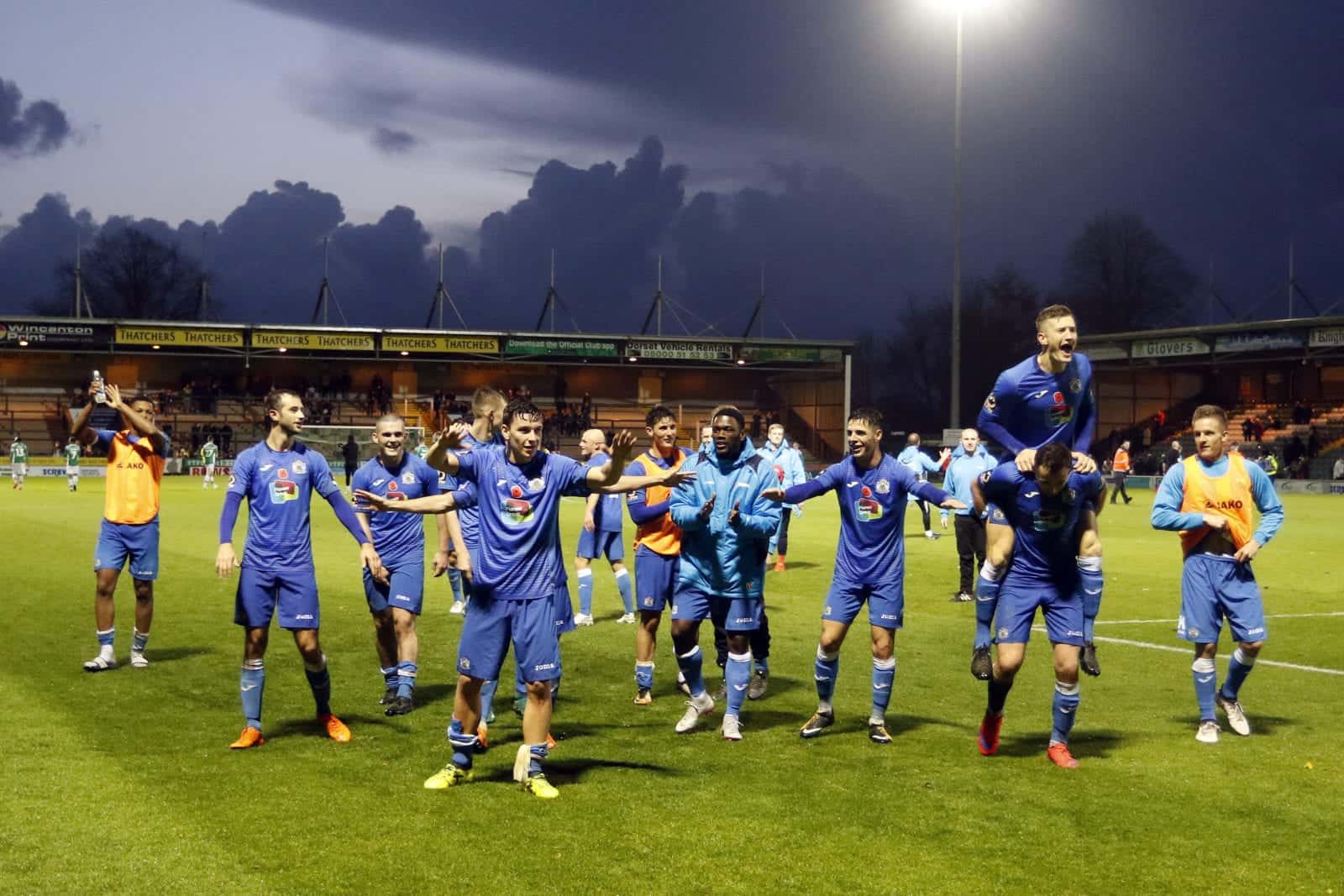 County hit the FA Cup headlines, and progressed to the Second Round for the first time in nine years, after coming from behind to outfight and deservedly beat League Two Yeovil Town at the Huish Park Stadium. 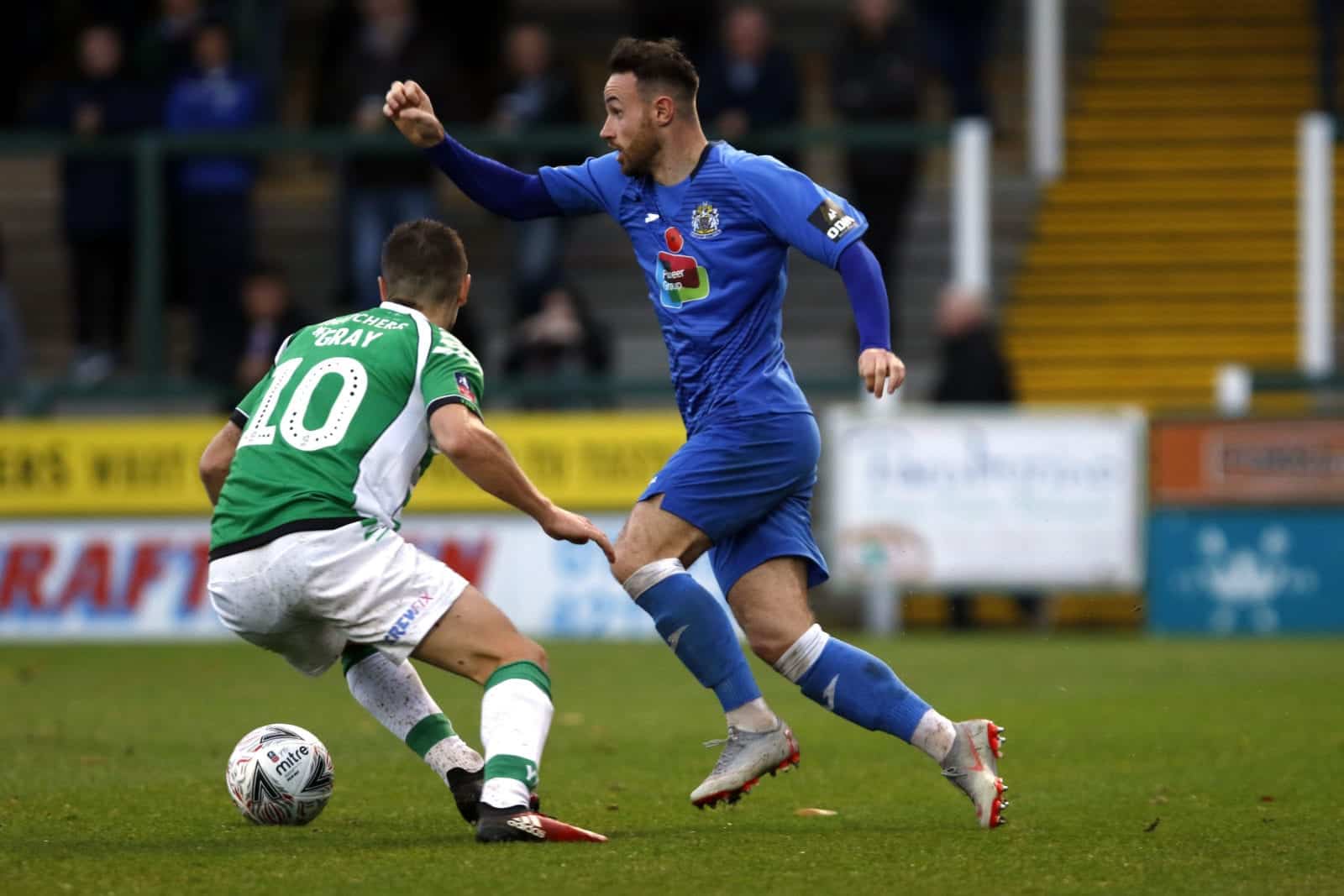 Two goals within four minutes from Matty Warburton and Nyal Bell gave the Hatters a half-time lead after they had conceded early on, and a third by substitute Frank Mulhern just after the hour-mark ensured that their name would be in the hat for Monday evening’s draw.

County took to the field on a showery Somerset afternoon with an unchanged 4-2-3-1 line-up from that which had started and won at Curzon Ashton one week previously to extend the side’s unbeaten run in all competitions into double figures. 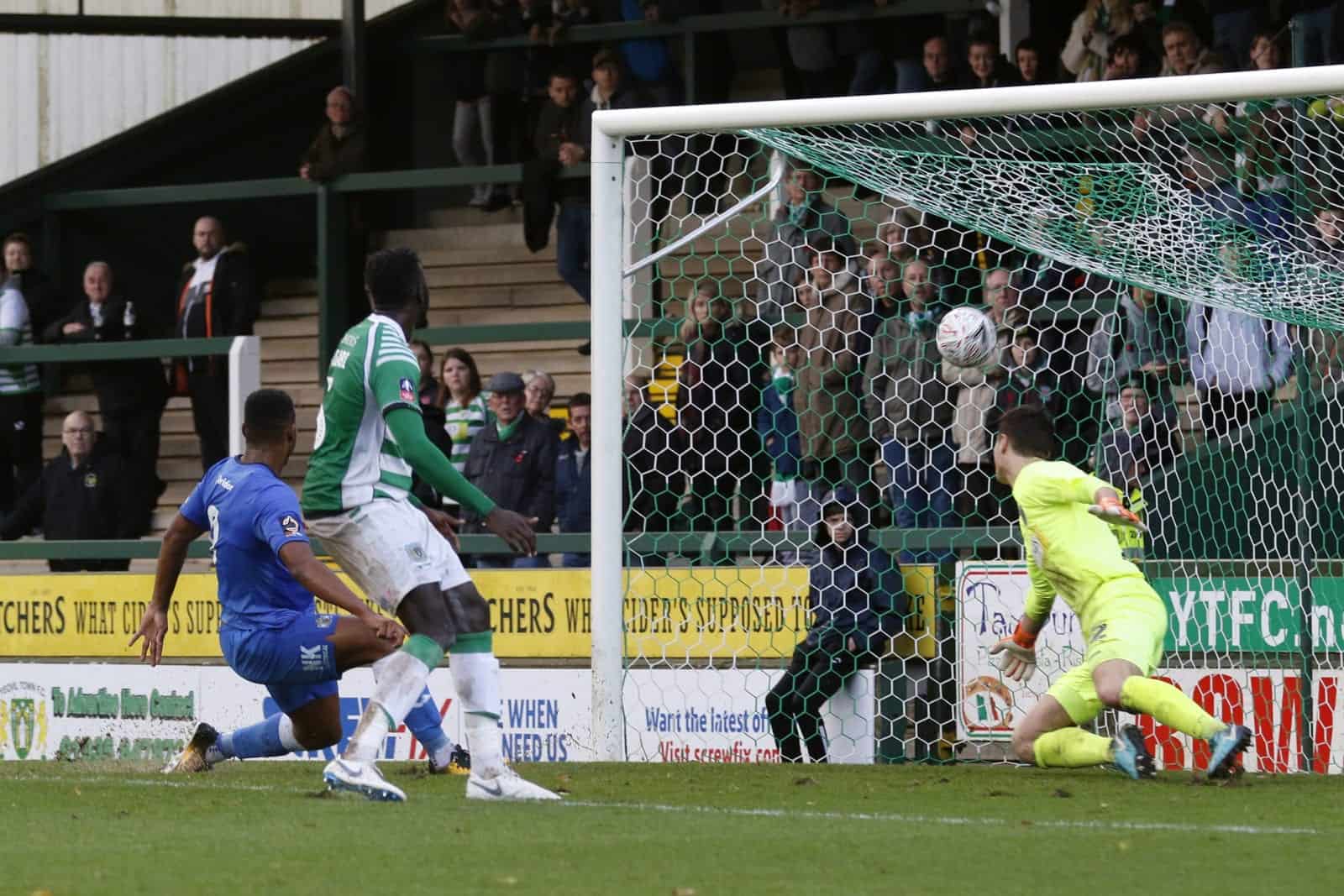 But that sequence looked to be in serious jeopardy after just eight minutes, when the ‘Glovers’ took the lead. Wes McDonald weaved his way into the County box on the left before laying the ball back to his captain Carl Dickinson, whose cross was met by Alex Fisher’s header that looped over Ben Hinchliffe and into the top-left corner.

Far from being fazed at giving ground to hosts that ply their trade two tiers higher, County responded positively in attack – with Bell drilling one shot wide of the right post, and hooking another over from close range, either side of a Warburton effort that was deflected behind. 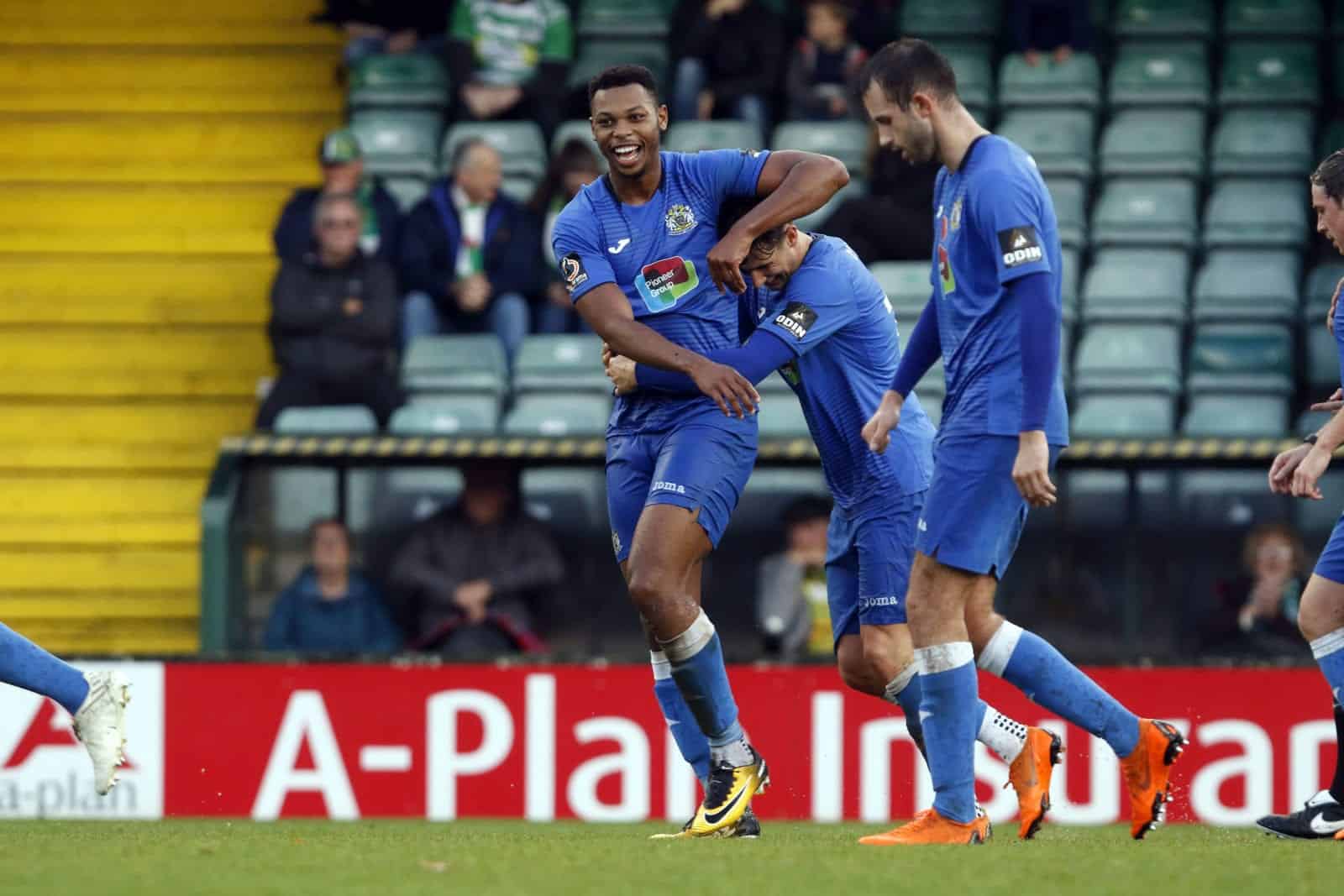 The hosts, meanwhile, had their rhythm disrupted up front, as Olufela Olomola and, subsequently, his strike-partner Fisher were replaced, due to injuries, within nine minutes of each other.

And five minutes following Fisher’s departure just before the half-hour, County drew level – following the award of a free-kick two yards outside the Yeovil box for a foul on new permanent signing Elliot Osborne. Warburton took it, and curled to near-perfection a delivery that soared past the outstretched home goalkeeper Nathan Baxter and into the right of the net. 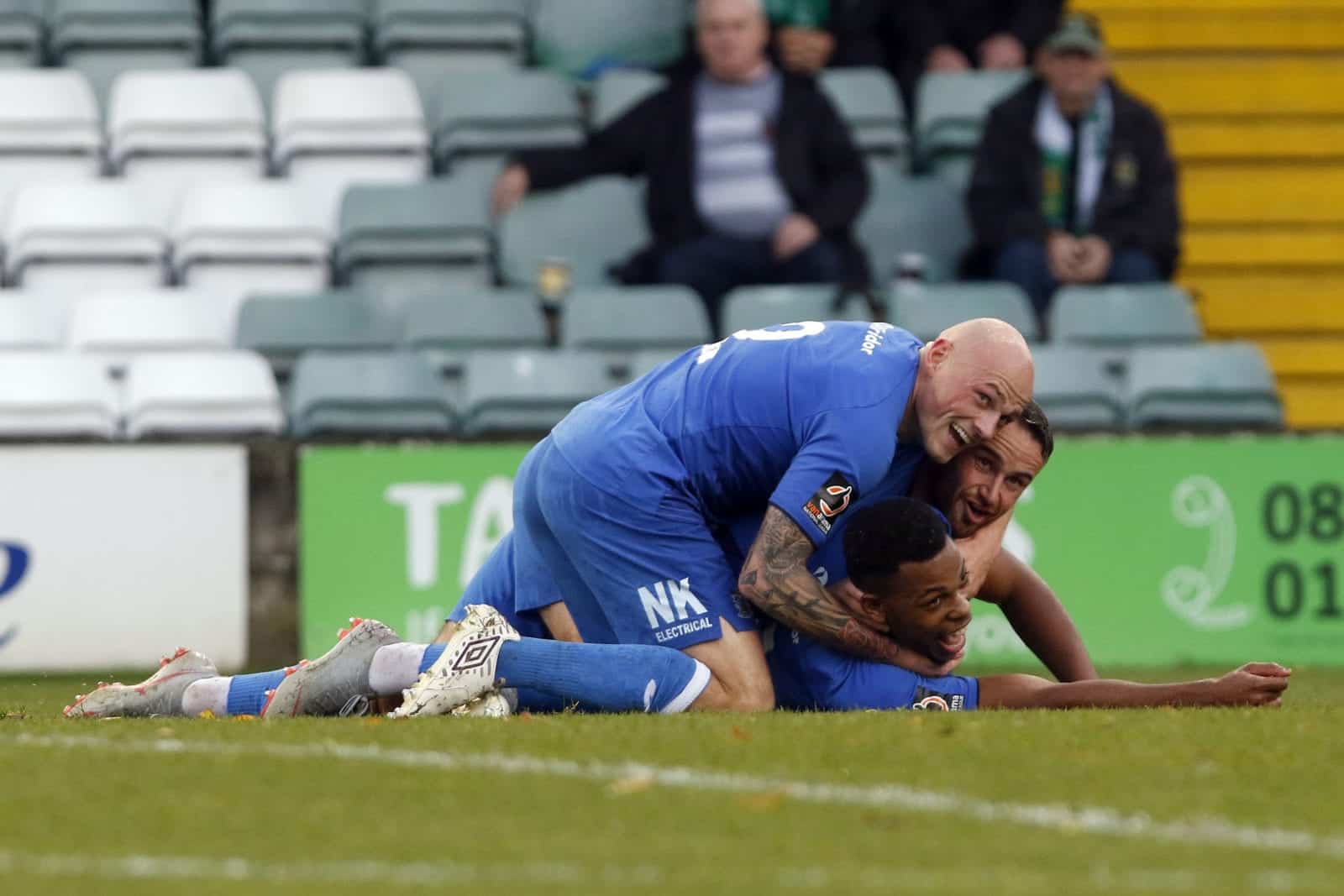 It got even better for the Hatters when, after 38 minutes, Adam Thomas threaded the ball through to Osborne on the right, and the latter’s low cross was turned into the far corner by the right foot of Bell from close range.

The closing stages of the half saw a shot from substitute Omari Patrick and, in added time, Tom James’ 25-yard free-kick blazed over. But County went in at the break good value for the lead.

The hosts re-emerged to sound a declaration of intent, as early second-half play concentrated in and around the County area. And three minutes in, they went incredibly close, as Hinchliffe saved with his legs from Francois Zuko – before Ash Palmer, who had celebrated his birthday 24 hours earlier, cleared McDonald’s follow-up shot off the line. 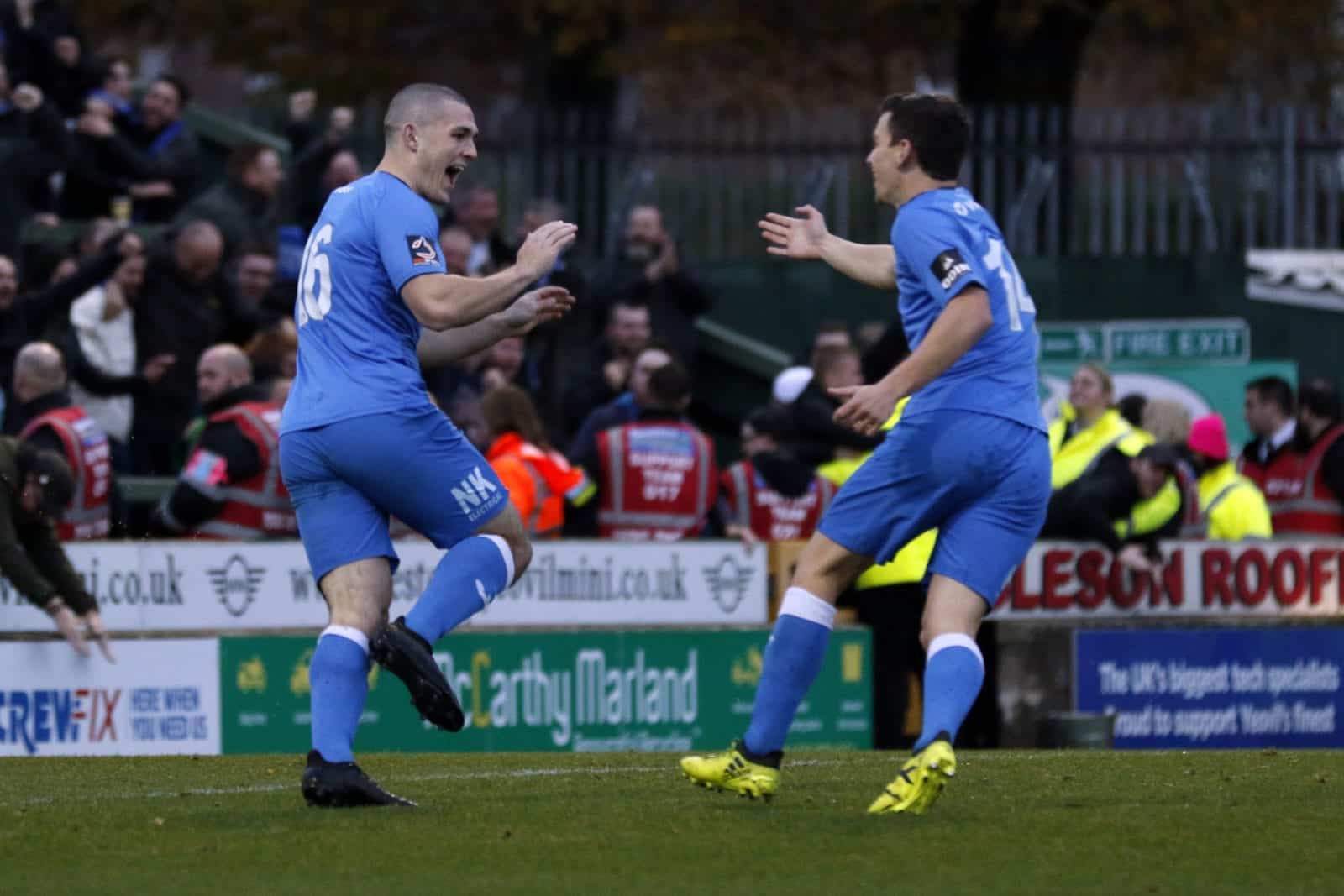 Beninese international Sessi D’Almeida then advanced from his own half to unleash a shot that flew beyond the left post, and Alex Pattison fired over from distance, as Yeovil continued to press.

But, with 62 minutes played, the Glovers were caught out by a sucker punch. Hinchliffe’s long clearance caused a horrible mix-up between Baxter and Shaun Donnellan – letting in newly-arrived replacement Mulhern, who had the simple task of rolling the ball into an empty net. 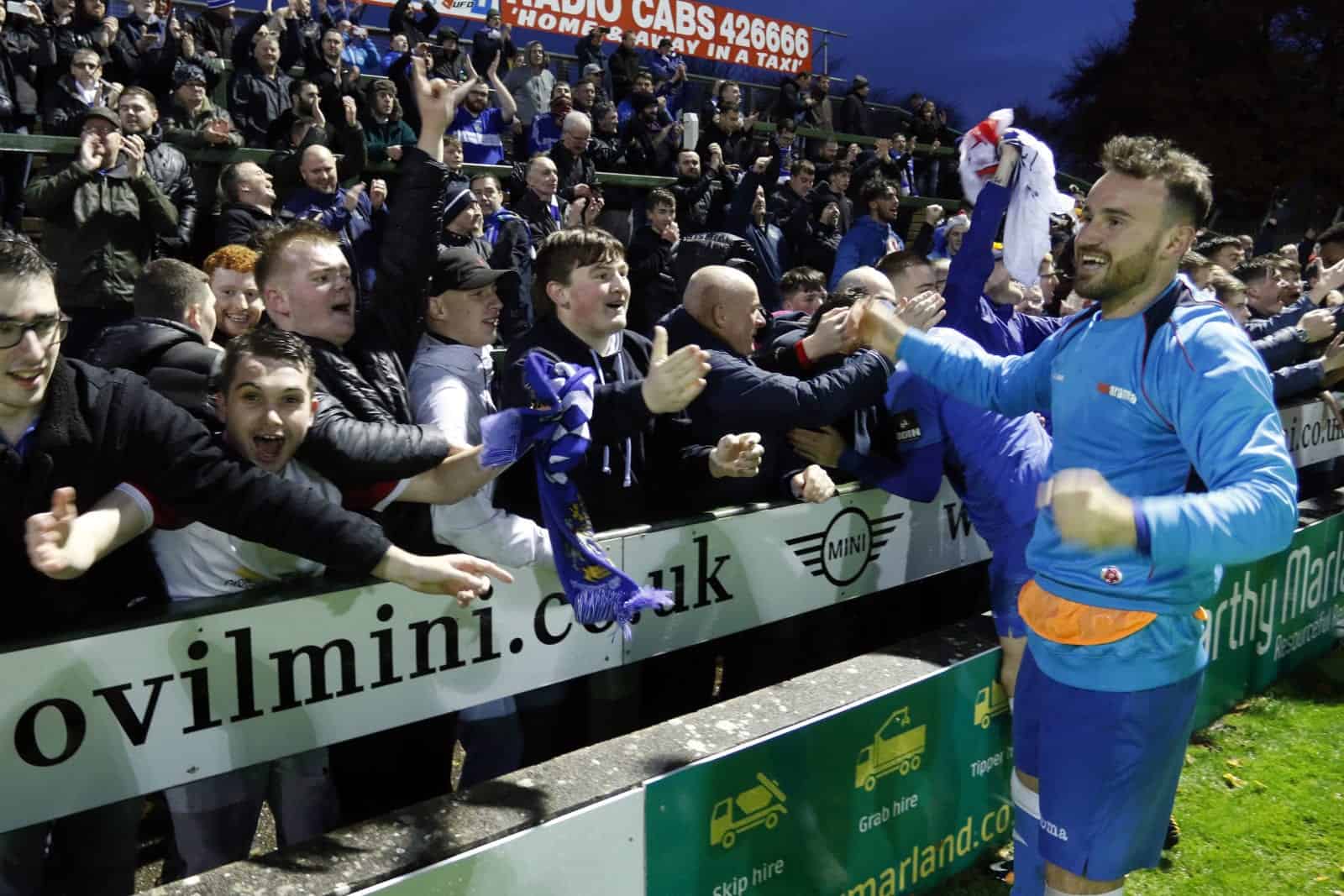 A dozen minutes later, Mulhern almost made it four by way of an audacious chip from distance that beat Baxter but floated narrowly shy of the right post. The advantage was, however, protected at the other end by Hinchliffe, who, having earlier parried behind a shot by McDonald, brilliantly tipped on to the crossbar James’ point-blank header from Rhys Browne’s cross.

The Hatters stood firm to see out the tie – and, in so doing, achieved their first Cup victory against Football League opposition since hitting the self-same Glovers for five at Edgeley Park 10 years ago.

But any talk that there might be elsewhere of it as a Giant-killing would do them an injustice. For all 14 players who graced the Huish pitch in a County shirt were themselves Giants on this memorable afternoon.