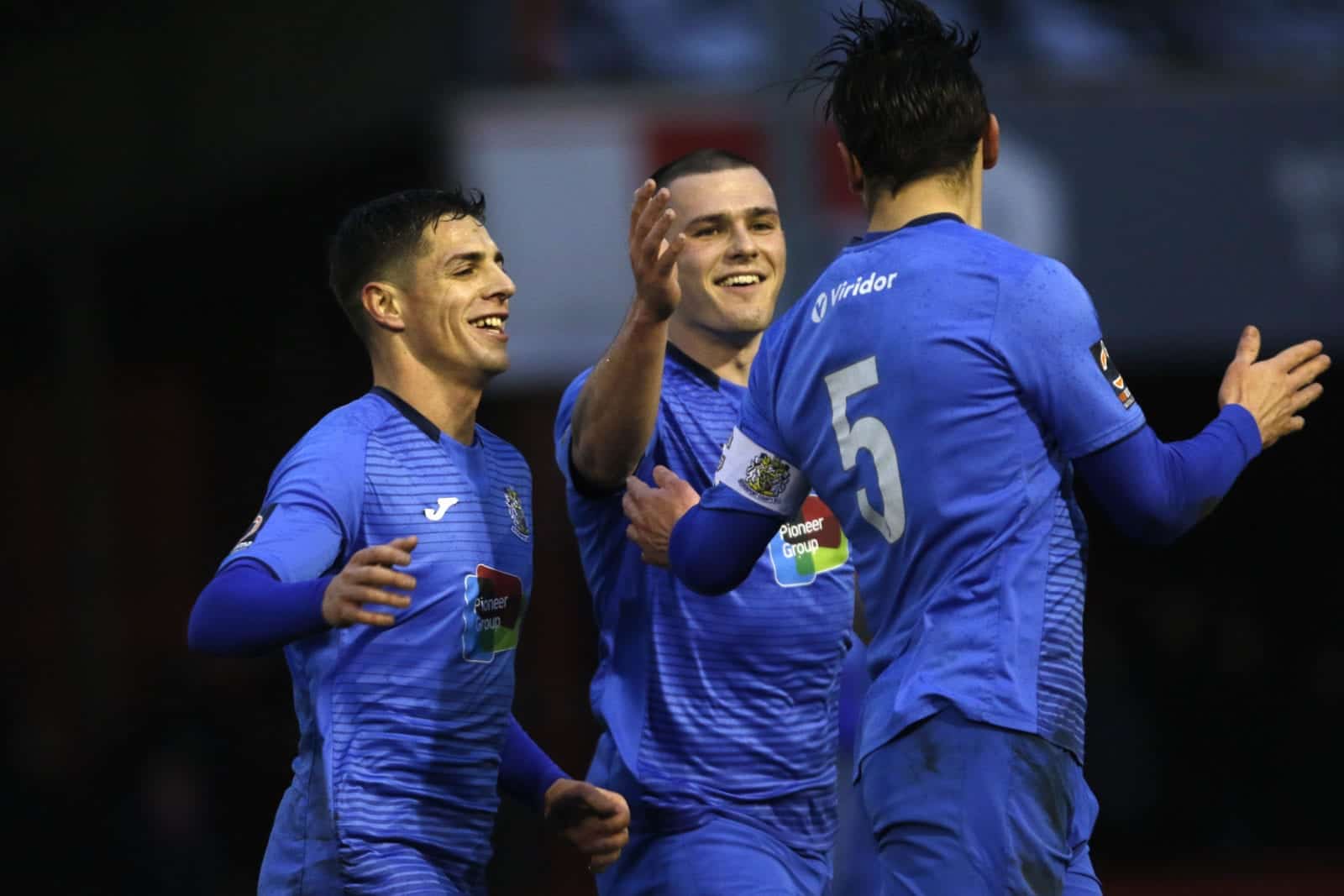 Palmer Deflects A-SHot, And Hatters Are In The Hat!

The Hatters will go into the new year for the third season running with an ongoing interest in the FA Trophy, after they overcame, by a single goal at a wild and wintry Moss Lane, near-neighbours Altrincham, who were reduced to 10 men before half-time when Jordan Hulme was sent off.

Acting captain Ash Palmer’s deflection from a Frank Mulhern shot midway through the first half proved the difference between the two Cheshire sides, and saw County eliminate the ‘Robins’ from a second knockout contest in as many months, following their Cup meeting on 20 October. 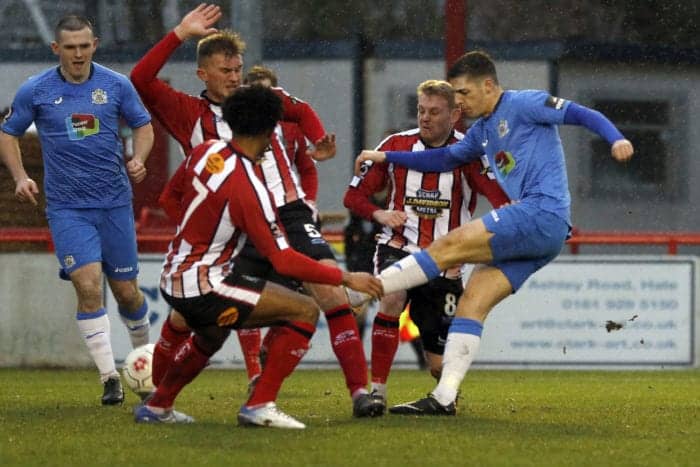 Two changes were made to the Hatters’ starting line-up from that which had taken to the field at Spennymoor Town, after skipper Paul Turnbull and Sam Walker were left with knocks from the League match there four nights earlier. Dan Cowan and Elliot Osborne were recalled to replace them, as County reverted to a back four with a 4-3-3 formation.

A week of plummeting temperatures reached its climax with rain and wind thrown in to make playing conditions challenging, although the Hatters, with the gusts behind them, camped out in the home half for the opening minutes, as Osborne headed over a Scott Duxbury free-kick from the left, before Duxbury turned from provider to poacher with a shot that was deflected behind. 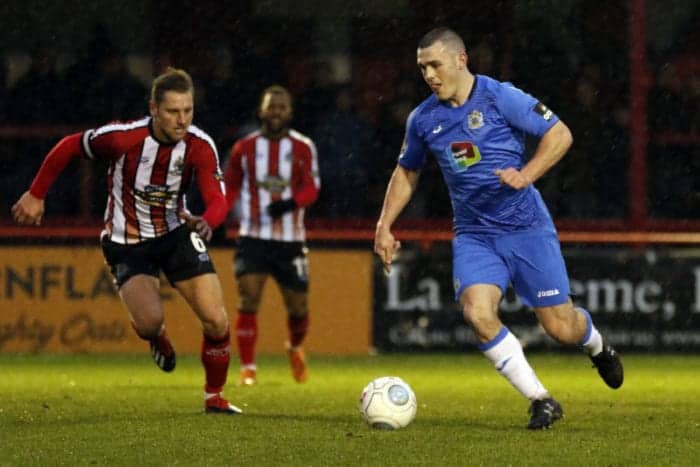 The hosts eventually responded with a series of attacks, albeit without unduly troubling the County defence. Ashley Hemmings fired a couple of shots over – and, in between those efforts, Sean Williams had a low drive smothered by Ben Hinchliffe, who then caught Hulme’s glancing header from Altrincham’s first corner.

But, with 22 minutes on the clock, County’s fourth corner was to be of more consequence. Osborne’s delivery from the left was initially cleared away from the near post – although only partially, before Mulhern tried his luck with an effort that ricocheted off Palmer to wrong-foot home goalkeeper Elliot Wynne and give the Hatters the lead. 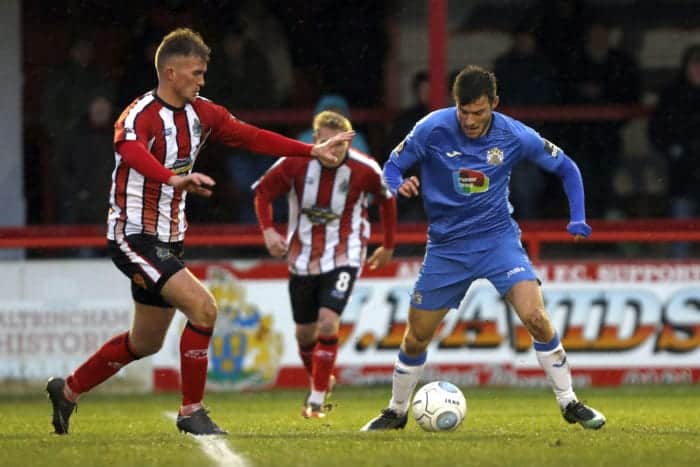 Five minutes later, their advantage almost doubled, when Matty Warburton was played through by Mulhern – only for Wynne to use his leg and deflect the former’s shot behind. And on the half-hour mark, another Duxbury free-kick, to the right of the home area, clipped the crossbar.

As half-time approached, Hinchliffe, after 41 minutes, showed superb reactions in parrying at point-blank range a volley that leading scorer Hulme flicked on from a nod-down by Jake Moult.

But Hulme’s afternoon then came to an abrupt end. In added time, he was shown a straight red card after reacting to Jamie Stott’s challenge with a stamp on the Oldham loanee.

Altrincham emerged after the break a goal and a player down, but with the weather swirling in the direction of County’s end that threatened to even up the dual numerical disadvantages.

The Hatters, however, began the second half in as lively a manner as they had done the first – with Mulhern twice testing Wynne, courtesy of a flick from an Adam Thomas cross, and, subsequently, a low drive, that the young ‘keeper did well to keep out. 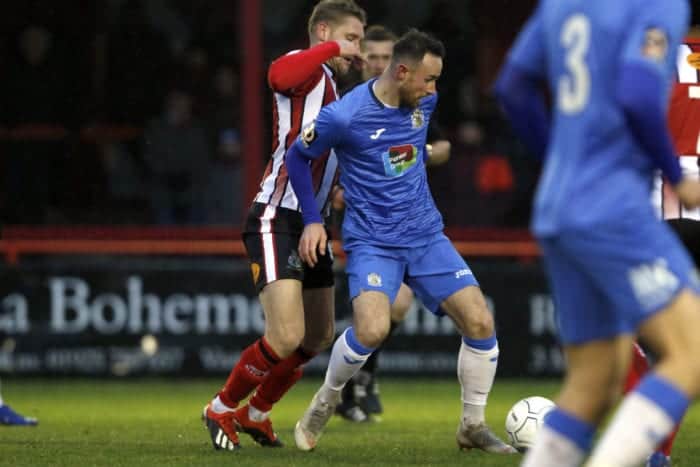 With the hour gone, though, the hosts looked to hit back. And after Josh Hancock had headed beyond the far post a corner from the left, Simon Richman went closer with a cross from the opposite flank that Hinchliffe tipped up on to the bar. And the jitters increased when County’s Number One had to stretch to hold a sliced clearance attempt by Palmer.

Two home substitutes launched attempts on the County goal, with ex-Hatter Connor Hampson blasting over and John Johnston’s low shot being smothered by Hinchliffe. But with a quarter of an hour left, County hit the woodwork for a second time, as Mulhern headed a Duxbury cross from the left against the outside of the near upright. 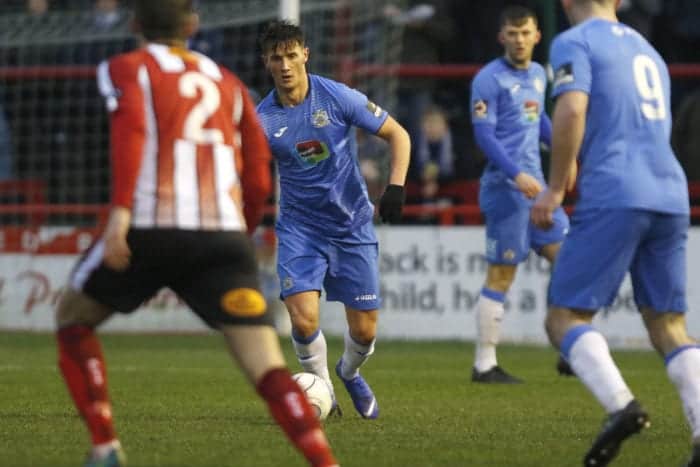 With three minutes remaining, Altrincham once again owed a debt of gratitude to Wynne, who executed a fine double-save from Warburton and Thomas, following good work on the left by Darren Stephenson.

But it was ultimately an ‘A’-okay conclusion for the Hatters – who, following their first of three successive contests against opponents with names to be filed under the first letter, now go into Monday’s draw for the Second Round.